The Dirt on Curbside Composting in Texas – Texas Monthly 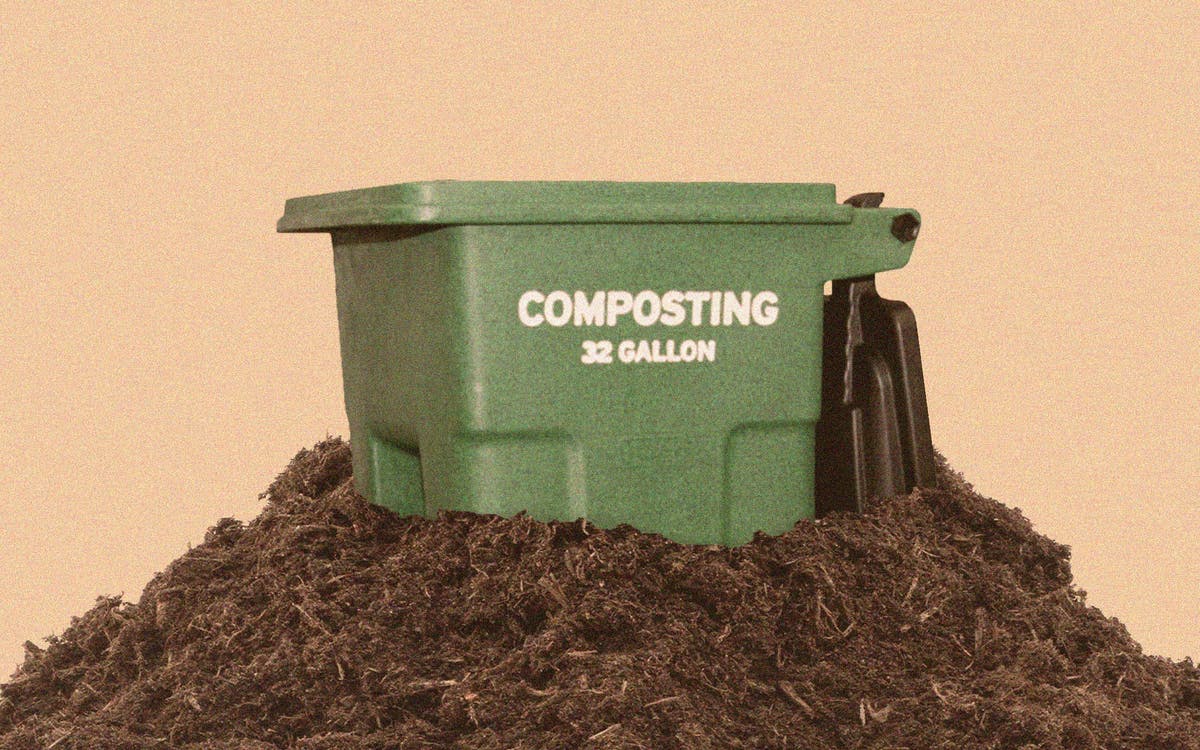 Not long ago, a friend thought I was losing it when I confessed to stockpiling mint-green compostable bags of food scraps in my freezer. I hadn’t yet made a plan for how to dispose of the frozen bundles, but I no longer wanted to toss compostable material into a dumpster labeled “landfill.” In my Central Austin neighborhood, homeowners roll out green compost bins every Friday for curbside pickup, but the service isn’t available to apartment-dwellers like me. When I asked my landlord if we could get a compost bin, he laughed. So, like any good eco-conscious Portlandia type, I started looking into my options.

I learned that the vast majority of Texans don’t have access to municipal curbside compost pickup. Of the state’s ten largest cities, only Austin and San Antonio offer the service. (Fort Worth has a pilot program, in which residents can pay $20 for a bucket, then drop off its contents at one of fifteen food waste collection sites. A few other communities, including Houston and Arlington, offer pickup for yard waste only.) Curbside pickup means that residents get a green cart to fill and put on the street weekly. Once garbage trucks pick it up, the yard debris and food waste travels to Organics By Gosh, in Austin, or Atlas Organics, in San Antonio. Both companies use a multistep process that includes sorting waste, running it through a grinder, and distributing the organic material in long outdoor rows, churning and watering it until it’s ready to be sold to general contractors, landscaping companies, and home gardeners.

To avoid losing money for the city, composting programs require buy-in from participants—and both Texas initiatives still have a long way to go. Only 29 percent of eligible Austinites set out their compost cart over three weeks’ worth of spot checks the city conducted from November 2018 to January 2019, the most recent period for which data is available. In San Antonio, the equivalent figure was 21 percent. A handful of progressive cities—including Seattle, San Francisco, and Portland, Oregon—have boosted participation rates by making composting mandatory and even levying fines on those who don’t comply. In freedom-loving Texas, that approach seems about as likely as Ted Cruz becoming a vegan.

The argument for composting, of course, is that food waste is a massive environmental problem. In 2019, 35 percent of food produced in the U.S. went uneaten or unsold. This waste is responsible for the same amount of greenhouse gas emissions annually as 32.6 million cars or 42 coal-fired power plants. Most of this food then ends up rotting in landfills, where it takes years to break down. A banana peel sandwiched between layers of refuse decomposes slowly without oxygen, releasing methane, a greenhouse gas that traps heat in the Earth’s atmosphere. According to a 2019 report, food waste in landfills is responsible for at least 11 percent of all U.S. methane emissions.

In a compost heap, that same banana peel would decompose must faster, thanks to proper airflow, moisture, and microorganisms, and over time would become compost: a nutrient-rich fertilizer that can be used to enrich soil, help retain water, and minimize plant diseases and pests. “Composting not only returns critical nutrients to the soil, it’s less energy intensive than any other form of material recycling,” says Lily Baum Pollans, author of Resisting Garbage: The Politics of Waste Management in American Cities.

Still, getting Texans on board hasn’t always been easy. Memi Cárdenas, public information manager at Austin Resource Recovery, recalls giving a community presentation sometime in the past year or two, well after the program launched in 2012. Her team gave away free kitchen tubs and informational guides. One man showed up just to yell at her. (“He just wanted to get it off his chest, and I understand that,” she says.) Cárdenas is proud of the progress the city has made. Austin now diverts 43 percent of organic material from landfills to compost; since the program began in 2012, it’s collected an impressive 165,331 tons of the stuff. Cárdenas says fewer residents are saying “I don’t want this,” and more are asking “Where’s mine?” One of the benefits is that residents can cut costs by downsizing their trash cart. “When you start talking to people about how they can save money, their ears tend to perk up,” she says.

In San Antonio, the city approved a curbside-pickup pilot program for compost in 2011, and since then it’s diverted roughly 335,000 tons of waste from landfills. Marcus Lee, marketing manager for the city’s Solid Waste Management department, says 368,000 households have an account with the program. Unlike many cities, San Antonio doesn’t charge a fee for compost or recycling service. Lee says the only collection fee a customer receives is for their trash, incentivizing residents to do the right thing. The program also donates compost to city beautification projects and to schools.

Apartment-dwellers like me are still out of luck, though, as are most college students, condo owners, nursing home residents, and anyone else who lives in a building bigger than a fourplex. Cities may be reluctant to expand composting to these groups because of the added logistical challenges. Pollans says that she’s aware of only one city, Seattle, that handles compost for residents, businesses, and institutions. She adds that from the standpoint of municipal pilot programs, it’s easier to communicate with residents of single-family homes than those who live in larger complexes. This limitation also makes it easier to trace contamination violations, in which someone tosses non-compostable items in the green cart. In San Antonio, Lee’s department combats this problem by sending out nearly three thousand educational fliers a month and offering a searchable database. (Pizza boxes: yes! Toilet paper tubes: no.)

The city has also made use of smarter technology. Before switching to Atlas Organics in January 2021, San Antonio worked with a private contractor that routinely rejected truckloads of compost. “If there was as little as ten percent contamination,” Lee says, “they told that truck to make a U-turn and go to the landfill.” Atlas doesn’t reject any loads, instead using artificial intelligence and robotics to identify and pluck out contaminating material. This change helped San Antonio increase its diversion rate—the amount of refuse diverted from the landfill—to 40 percent, up from 36 percent in prior years.

For the many Texans who lack curbside pickup, private companies have stepped in. San Antonio–based Compost Queens provides pickup and other services, such as workshops and soil testing, to multifamily residences and businesses. Cofounder Kate Jaceldo says she saw a gap in education about food waste and composting. Her team uses airtight buckets and bokashi flakes, which manage both odor and pests. “Our vision goes beyond our bottom line to the larger goal of getting people to compost their food waste,” Jaceldo says.

Cárdenas and Lee offer an easy fix for anyone who’s squeamish about the smell of compost or the possibility it might attract pests: freeze it. Lee recommends using a paper sack with shredded paper at the bottom. It’s no surprise that both are avid composters. “It’s almost a game,” Lee says, adding, “a single eggshell will go into my compost.” Cárdenas says her favorite party trick is sorting kitchen trash: “People just love having me over.”

As for my composting dilemma, I amassed thirteen pounds of scraps in my freezer before figuring out a solution. My friend Leti and I made a deal: I’d buy her tacos if she added my compost bundles to her green cart. Now that’s a win-win.

Cárdenas recommends finding a compost buddy—someone who has a green cart (or backyard DIY setup) that you can add to. Proper compost buddy etiquette is to freeze your compost and drop it off before the collection time.

There are great techniques for composting in an apartment, and no, it doesn’t smell. Dallas’s sanitation department suggests trying vermicomposting (with red worms) or bokashi (fermented organic matter). For another in-home method, popular in Japan, all you need is a cardboard box and a few ingredients.

Companies that’ll come to your home to pick up kitchen scraps are popping up like wild mushrooms. In Houston, Happy Earth Compost offers pickup for roughly $15 a month, and Moonshot Compost will do the same for $10. Dallasites can try Recycle Revolution, Turn Compost, or Compost Carpool, while Cowboy Compost is based in Fort Worth. If you’re in El Paso, try New Green Organics.

Community gardens and schools with gardening programs are often eager to take food scraps—just call ahead and ask. Most will happily accept your donation of nutrient-rich “black gold.”