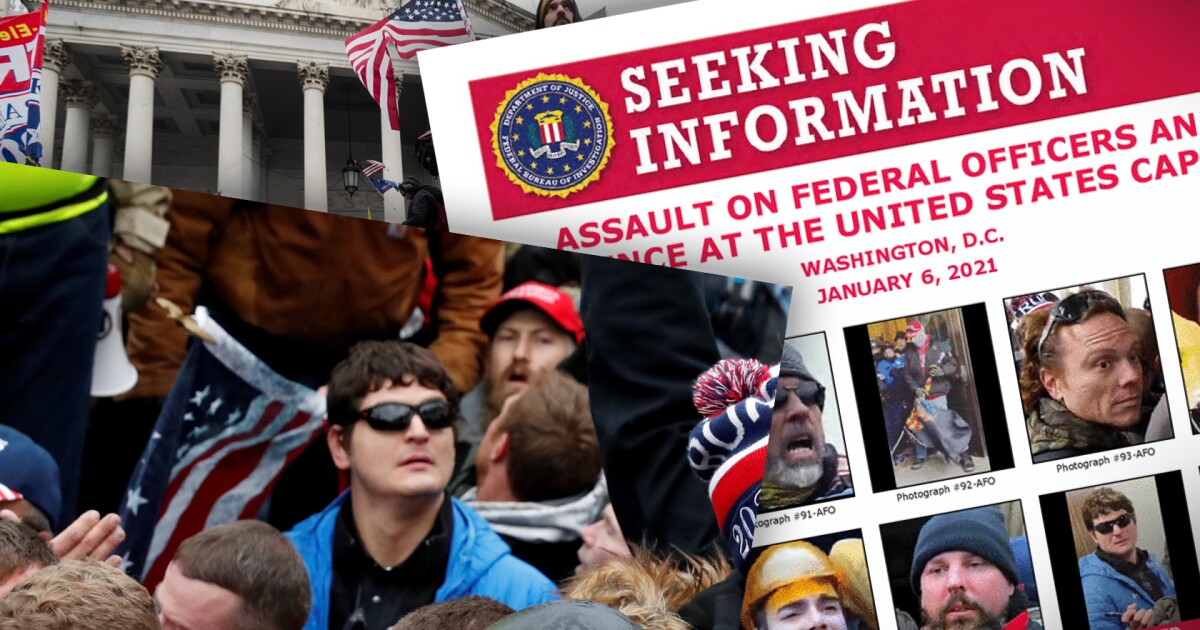 In the videos and photographs from that horrific day, Vitali GossJankowski is smiling.

The 31-year-old Gallaudet University student, after years of posting pro-Trump messages on Facebook, stormed the U.S. Capitol with an unruly mob on January 6.

He is shown wearing black sunglasses and a blue ski jacket, and — in a video immortalized online in the days immediately after the assault — gleefully waving a stun gun.

GossJankowski’s bravado proved to be misplaced. He was arrested on January 18 and faces federal criminal charges for “violent entry and disorderly conduct on Capitol grounds” and “using or carrying a dangerous weapon.” He is not the only college student facing federal charges in the rioting. Gracyn Dawn Courtright, a senior at the University of Kentucky, has also been charged.

In the pecking order of right-wing terrorism, people like GossJankowski exist at the bottom. He neither holds influence, nor is he a prominent member of any extremist group. He has no large social-media following.

GossJankowski is a disinformation consumer.

A review of more than a decade of his public postings on Facebook shows that he believed the falsehoods propagated there and in right-wing media that the 2020 presidential election was “stolen.” And his consumption of those lies, combined with his adoration of Donald J. Trump, turned GossJankowski into an insurrectionist. A foot soldier.

“There will be a smooth transition to a second Trump administration,” GossJankowski wrote on Facebook on November 11, four days after Joseph R. Biden Jr. had already been declared the winner.

America’s right-wing terrorism threat is fueled, in part, by foot soldiers like GossJankowski — people who flirt with racism and conspiracy theories for years, and see their views validated by Fox News. GossJankowski’s radicalization occurred gradually, its temperature rising to a slow boil. Then came the call to action, directly from the Oval Office.

“He is a wannabe,” said Ricky Taylor, a Gallaudet University alumnus and well-known blogger in the Deaf community. GossJankowski is also Deaf, and Gallaudet is an elite college in Washington, D.C., dedicated to the deaf and hard of hearing.

Katherine Jankowski, his mother, was formerly an administrator at Gallaudet.

Taylor has blogged about GossJankowski’s participation in the riot at the Capitol, as well as the presence there of a second Gallaudet student who has not been charged.

Trumpism, Taylor said, has resonated with some Deaf people partly because they often struggle economically, making them vulnerable to the lure of extremism.

“Job opportunities are severely limited,” he said. “The pay is often low and unsustainable. Deaf people are always trying to find ways to survive in this society. Do you see many deaf people getting hired in Silicon Valley? Answer is you don’t.”

It is unclear whether GossJankowski attacked anyone with his stun gun at the Capitol. Michael Fanone, a District of Columbia police officer, suffered a mild heart attack after being beaten and Tased repeatedly by the pro-Trump mob.

When the police displayed a picture of Fanone, GossJankowski said he recognized the man, describing him as “the officer with tattoos on his neck.”

“He said he did not use his Taser on Officer Fanone, but if he touched him, he touched his helmet and it was merely to help him,” states the summary of GossJankowski’s police interview.

But Taylor and others say GossJankowski lied to authorities. A “Statement of Facts” from the U.S. Justice Department says a video shows someone handing him the stun gun at the Capitol, contrary to his assertion to the police that he found it “on the ground.”

The student also told investigators he discarded the stun gun in the trash at the Capitol. Taylor, however, said GossJankowski posted pictures of that same device on Facebook after returning home from the Capitol riot.

Fanone, the police officer, said in an interview with the Washington television station WUSA9 that the rioters chanted, “Kill him with his own gun!” while he fought for his life.

At 6-foot-3, according to his stats as a Gallaudet football player in 2017, GossJankowski is easy to spot in the countless photos and videos from that 43-degree January afternoon. Some of the most harrowing ones put him in close proximity not only to the attack on Fanone, but also the death of Rosanne Boyland. The 34-year-old Georgia rioter was apparently crushed by her fellow Trump supporters who were trying to break the line of police officers defending the West Terrace entrance to the Capitol.

The moment where GossJankowski shows up most prominently begins just after the three-minute mark in a video shot inside the crowded entryway. He raises the stun gun and presses the button three times.

“Let us in! Let us in!” chants the advancing crowd of rioters. At one point, GossJankowski moves near the front of the mob, putting him in direct contact with police officers. He crouches as the police use their shields to push against him and the other rioters, and then retreats as the frenzied mob continues clawing at the Capitol entrance.

He shows up again in a video embedded in a New York Times investigation of the attacks on police officers at the Capitol. Credited to “The Black Conservative Preacher, via YouTube,” the 20-second clip shows Fanone being dragged outside and brutalized by the mob. The violence against the cop apparently crossed the line for GossJankowski, who can be seen in the bottom-right corner of the screen wagging his index finger at the roiling crowd.

The Chronicle asked Alex Little, a former federal prosecutor, how much trouble GossJankowski is in. Little said that if no additional charges are filed, the punishment could amount to less than a year in jail or even probation.

But if evidence shows that GossJankowski got violent at the Capitol, Little said, the situation grows more serious. Capitol Police Officer Brian Sicknick died from injuries inflicted at the riot.

Little said if he were advising GossJankowski as a client, “I’d say, ‘You were involved in an assault on the Capitol that killed a police officer. You have exposure in that murder.’”

“And it’s not just a riot anywhere, it’s a riot at the U.S. Capitol,” Little continued. “So I would expect the federal government to come down particularly hard on those who participated in it.”

“This was not punching a security guard on Black Friday at Best Buy,” he said.

Ubong E. Akpan, GossJankowski’s public defender, declined a request for comment, and Gallaudet officials would not speak about the details of the case.

“While we will not provide information or comment on individuals alleged to have participated in the recent violence at the Capitol, we can confirm that we are fully cooperating with law-enforcement officials and conducting our own internal investigation,” said a statement from the university’s spokesman.

Last week, an unsolicited text appeared on a Chronicle reporter’s cellphone from someone identifying themselves as Vitali GossJankowski.

“There is absolutely nothing exciting about me,” the individual texted. In response to a reporter’s subsequent questions, the person wrote: “Stay away from me.”

Born in Russia, GossJankowski was adopted as a child by an American couple.

One of his adoptive parents, Katherine Jankowski, is a highly respected figure within the Deaf community. She is a former dean of Gallaudet University’s Laurent Clerc National Deaf Education Center and recently published a biography of one of the institution’s first female graduates.

But prior to that, he spent years posting about Trump on Facebook — dating back to an April 2, 2012, post regarding an episode of “The Celebrity Apprentice.”

A week and a half later, GossJankowski posted another anti-Hispanic post, complaining that the driver for his bus was napping during a break.

GossJankowski’s offensive and aggressive behavior dates back many years, said his high-school friend Joseph Saccente, a classmate at Gallaudet’s Model Secondary School for the Deaf.

The two stayed in touch for many years, but Saccente said they drifted apart over his friend’s increasingly extremist politics and had a final falling out after Trump was elected president. When Saccante heard the FBI was looking for GossJankowski for his role in the Capitol attack, it came as little surprise.

After GossJankowski left high school, he attended the Rochester Institute of Technology. It didn’t end well, he told friends on Facebook.

“Got suspended and cannot be a Rit student for next three years,” he wrote on December 18, 2008, adding in the comments that “i wrote the seven of Nazi swastikas symbols on the white removable board.”

GossJankowski wrote that he ultimately earned a culinary degree from a community college in Arizona. It didn’t improve his career prospects, he complained in a 2016 Facebook post.

“Hearing people easily get the job and get promoted more faster than deaf people,” he wrote. “For an example, I formerly worked at Ruth Chris from January 2014 to July 2015 as a dishwasher; in despite, I have an as degree in an advanced culinary arts, no promotion, and or raise wage.”

According to his Facebook posts, GossJankowski moved to Washington, D.C., in August 2015 and started at Gallaudet that fall. When Trump was inaugurated in January 2016, GossJankowski posed for a smiling Facebook photo outside the White House fence.

Four years later, when Trump lost his 2020 re-election bid, GossJankowski refused to accept it. He complained on Facebook of “discrepancies” and cheating by the Democrats.

Jamel Stallings, a Black senior at Gallaudet who debated GossJankowski via Facebook messages about racism within the Trump movement, told The Chronicle: “Looking back now, I just consider Vitali to be terribly confused and misinformed. I don’t know him personally to say he’s racist, but I do think he has intolerant views that I hope he takes the time to re-evaluate.”

At the same, Stallings said he considers GossJankowski just “another victim” of the lies told by the former president and echoed by right-wing propagandists.

Back 4 Blood – Act 1 A Clean Sweep: Head Into Town to Rescue Survivors: Defeat The Breaker Bossfight

Minecraft’s next big release is called The Wild update, out 2022