The Complete, Surprising 8 Year History Of The LEGO Poop Piece 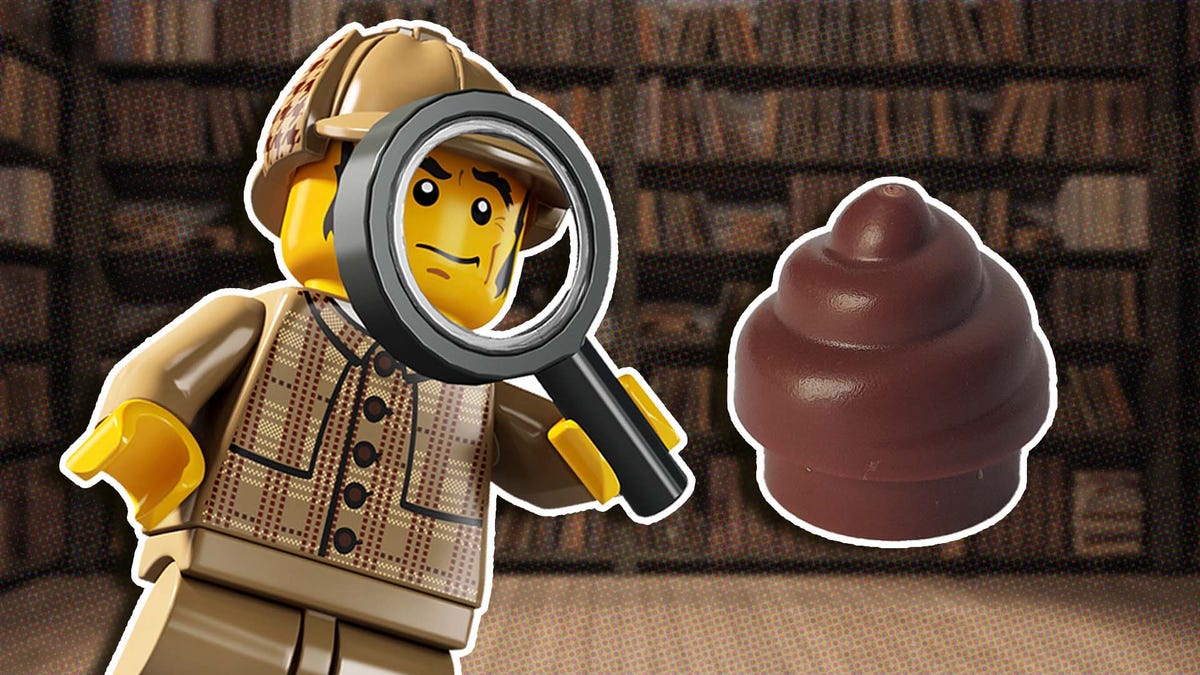 In October, thanks to a viral tweet, the world learned of a new LEGO City set that contained a giant human turd inside a portable toilet. It was such an absurd sight that, after Kotaku reported about it, I was invited by NPR to discuss it on one of their podcast trivia shows. But this isn’t the first time Lego has included poop in a set. Actually, the poop piece goes back far enough that I can spin an entire history of what is formally known as LEGO part 6275030. And while the uses in LEGO sets over the years have varied wildly, the ‘poop’ piece has always appeared in interesting (if not gross) ways.

Some people will try to tell you that the brown swirl piece is actually a cupcake piece that LEGO has re-colored and re-used as poop. I’m here to challenge that theory. The reality is that LEGO has a much better cupcake top piece, numbered 6060731, which dates all the way back to 2014. Confusingly known as the swirled top piece, it has been used in numerous sets to represent cakes, sweets, chocolate, etc. And when LEGO needs to represent poop—which they need to do more often than you might expect—the company eschews the actual cupcake piece, and instead uses piece 6275030 aka the actual poop piece.

So, when did the actual poop piece first appear in a LEGO set? That was in 2019, as part of the Dog Sitter set that appeared in Collectible Minifigure Series 19. This was a part of a fan-favorite collectible minifigure series that featured a variety of characters, like a pizza mascot and gamer. This dog-themed figure became a hit because of how different it was compared to past minifigs, which are often more conservative. By comparison, this novel set came with things like a poop scooper, two dogs, and a nice blue hat.

LEGO used the piece again in 2020 via a small poly-bag catapult and fortress set that was released in Europe as an extra gift packaged with Issue #3 of LEGO Explorer magazine. No, you aren’t being trolled. That is a catapult that fires shit. Perhaps LEGO officially would say it’s firing a large pile of mud, but let’s all be real here: that’s poop. That’s a poop catapult.

After this undeniable appearance, the piece showed up in a 2020 LEGO Friends airplane, which might sound unusual except that it came as an accessory for the included dog.

Later that same year, the infamous poop piece shows up in a Harry Potter set as…the top of a cupcake! Okay, so LEGO does double-dip sometimes. This is where things get weirder and grosser. While the actual cupcake piece I previously mentioned is only used to represent deserts or ice cream treats, the poop piece does from time to time, also get used by LEGO to create similar treats and sweets. This is very gross if you recognize it. Imagine being a kid who got that Dog Sitter figure and then you get this Harry Potter set and realize that the cupcake and the dog shit are one-in-the-same. At least if you lose one…

Moving forward, LEGO would continue to use piece 6275030 as both shit and food in multiple Friends, City, and Jurassic World sets. Basically, whenever a monkey, dinosaur or dog was included in a set, LEGO would chuck in some poop, too. It became a staple of animal sets, alongside some desert sets as well. Was this done to save money? Was this a mistake? Or did someone at LEGO find it funny that all these cute minifigs were eating poop? Or did nobody at LEGO think anyone, let alone a grown adult, would waste this much of their time researching the piece? Probably that last one…

However, it wasn’t until 2022 that LEGO took another bold leap and started to explore using the piece as human excrement. This year marked the first time the poop piece was included in… The Office LEGO set based on the popular TV show. Yes, while the recent Train Station set got all the press and tweets, it was just another time that LEGO had used the piece to represent human shit, and within the same year to boot. In the Office set, under a desk, you can find the LEGO turd which appears to be a callback to the season 2 episode “The Carpet.” In that episode, a human being shits on Michael’s office floor as part of a disgusting prank. This might seem like an odd thing to reference in a LEGO set, but The Office set is a display set intended more for adults and fans of the show and not for kids to play with.

Following that appearance in September of this year, it would of course show up in the famous Train Station set toilet. It also appeared in a New York Taxi Cab set which was also released in 2022. Here it’s found in a trash can and, apparently, it’s supposed to be dog shit that someone has thrown away. But, it’s a trash can in NYC. So, let’s be honest: It could be human shit, too. But whatever the source of the poop, it feels appropriate to the city setting.

Now, as 2022 wraps up, it seems this was truly the year of human poop in Lego. We got at least two sets that included the poop piece to represent human shit. And if you count the Taxi set’s hidden turd, which I do, that’s three sets in one year that contain human crap. It’s a new era for LEGO. What will 2023 bring us? Will we finally get an official piss puddle piece? I can’t wait to find out.

21 Of The Most Popular Perfumes At Sephora Right Now