The California State System Made a Big Bet for Fall. It Paid Off in Enrollment. 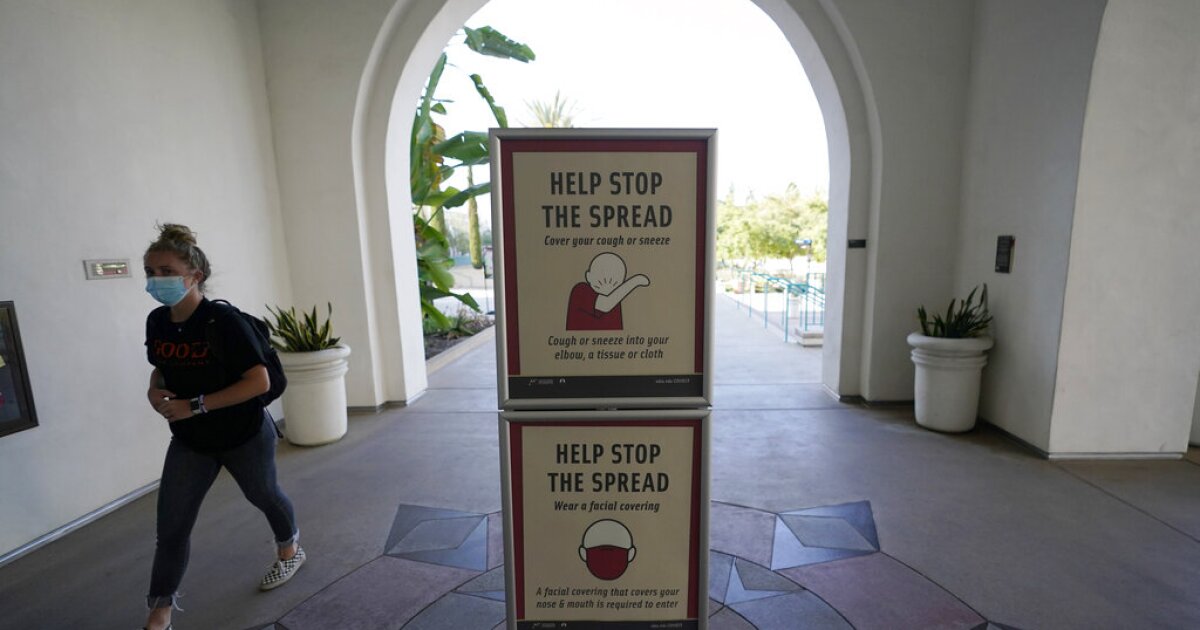 ast May, just weeks after college campuses shuttered in response to the coronavirus, the California State University system announced a decision that would send a sort of ripple across the nation’s higher-education landscape.

Long before many institutions had set their plans — and despite a prevailing narrative that students wouldn’t enroll — California State declared that fall semester on its 23 campuses would be largely online.

That calculation — one that risked the financial fallout of a remote semester to preserve the health of its communities — would be repeated by hundreds of institutions in the coming months.

In at least one way, the early call paid off. Keeping most students off campus and studying remotely didn’t cause a big drop in enrollment — in fact the system’s student body grew slightly from the previous year.

“In terms of the decision being announced early, it was the right decision,” said Zahraa Khuraibet, president of the Cal State Student Association and a graduate student in structural engineering at California State University at Northridge. “It was nice to see the system was the first to take action and prioritize safety,” she said.

Timothy P. White, who served as chancellor until the end of 2020, said the early announcement gave faculty, students, and staff time to prepare for a fall semester that was unlike any in memory. “It seemed very clear to me that we would be much better off creating a degree of certainty in a time of great uncertainty,” he said.

It was also the only morally defensible choice, he said: “If I was wrong, I could live with that. I would have felt irresponsible if I had done it the other way around.”

The academic year has not been without its problems. Faculty and staff members are feeling burnt out and overworked, trying to balance home and work lives that overlap in both time and place. Students, too, are reeling from the economic impact of the pandemic and the isolation from their peers.

That could all change soon. The system is again ahead of the pack, announcing in December that it planned to open campuses again in the fall. But it’s not clear if that decision will be welcomed as much as the one in May, and if, after a year of studying remotely, students and faculty members will feel safe returning.

oving instruction entirely or primarily online eventually became the choice of more than a third of American colleges, according to data from the College Crisis Initiative at Davidson College. Among public four-year colleges, more than 45 percent were entirely or predominantly remote for the fall semester.

Despite predictions that students wouldn’t enroll for a semester of remote coursework, California State’s systemwide enrollment increased by about 1 percent, including a small increase in undergraduate enrollment for Black students. The number of Hispanic students increased by nearly 5 percent, according to the system’s data.

After so much uncertainty, system officials were relieved. White, the former chancellor, said the system had planned for a decrease of up to 5 percent.

Nationally, enrollment at four-year public colleges also increased, but by just 0.2 percent, according to data from the National Student Clearinghouse, and that was driven mostly by a 4.6-percent increase in graduate students at those institutions. Undergraduates seeking bachelor’s degrees declined over all by nearly 1 percent.

The strong enrollment figures were welcomed, but the system and campuses have also faced an enormous logistical challenge long before courses started in the fall: how to provide instruction and student services for nearly a half-million students in the largest public university system in the country.

Some of that work began immediately in March when the system quickly moved some 80,000 courses from in-person to remote, said Joseph I. Castro, the current chancellor, who began his term in January after serving as president of the California State University at Fresno.

It was challenging not just because of the sheer number of students; the system’s campuses enroll a high proportion of underserved minority students — 45 percent of students identify as Hispanic — and those from low-income families. More than half are the first in their family to seek a bachelor’s degree, according to system figures.

Many students, as well as staff and faculty members, didn’t have access to appropriate technology. So the system spent nearly $23 million to buy and distribute some 10,000 mobile Wi-Fi units and 21,000 laptops. Some campus parking lots were also set up to provide internet access.

Student-support services, like academic and career counseling, also had to be moved online, and at many campuses also required creating an online scheduling tool, said Luoluo Hong, associate vice chancellor for student affairs and enrollment management for the system. “Many campuses didn’t have an online appointment system before, even though most students were commuters,” she said.

To help meet the needs of food- and housing-insecure students, the system took measures like providing access to food banks for students who might live closer to a campus different than the one where they were enrolled.

Strong enrollment kept the system from a financial disaster, said Castro, but there was still a high price for all the changes required for this academic year. After spending more than a half-billion dollars from federal coronavirus aid, the system still had to use $200 million in reserves to cover their expenses, he said.

The system also preserved the vast number of employees at a time of record job losses in higher education. Fewer than 200 employees in the system lost their jobs, said Castro, out of about 53,000 total.

In addition, many of the changes made to adapt during the pandemic could provide long-term benefits to the system and students, Castro said. The changes to admissions and student-support services have made them more accessible for students, for example, and the increase in online services could mean that fewer people need to spend as much time commuting to campus after the pandemic subsides.

tatewide policy organizations have given the system high marks for the way it handled the fall semester, but access to reliable internet service remains a widespread problem, say higher-education advocates in the state.

“This pandemic has upended everything, and while being completely virtual is not ideal, it has been necessary and appropriate for public-health reasons,” Michele Siqueiros, president of the Campaign for College Opportunity, a nonprofit group, wrote in an email.

Siqueiros’ organization is one of 20 that are urging the system and state leaders to increase the amount of internet bandwidth available for college students. Low-income college students should also be eligible for reduced prices for internet service, as families with students in the elementary and secondary schools are, said Manny Rodriguez, a senior legislative associate for the advocacy organization Education Trust-West.

Another key issue is that students are still struggling academically, Siqueiros wrote, and should be allowed to choose between getting a letter grade or taking courses on a credit/no-credit/fail system, as they did during the spring of 2020. The Cal State Student Association has also approved a resolution calling for this option.

The decision to operate mostly remote this academic year also didn’t entirely prevent cases of Covid-19 on campus, though 13 of the universities have reported fewer than 100 total cases, and only two universities had more than 1,000 cases in total, California State Polytechnic at San Luis Obispo and San Diego State, according to figures compiled by The New York Times.

Faculty members and students, too, have praised the system’s decision to be remote for now. But a year into the pandemic, many are having a hard time feeling positive about the future.

Margarita Berta-Avila, an assistant professor of education at California State University at Sacramento, said a big problem is that the lines between work and home life have blurred. The faculty have to stretch the hours they work and find it harder to carve out time to take care of children or others in their families, she said.

An open letter to Castro, from two faculty members who are also parents, calls on the chancellor to have some empathy for those who are juggling the care and education of their children by excusing them from teaching one full course.

As of now, faculty members are able to take sporadic days off, said Charles Toombs, professor of Africana studies at San Diego State University and president of the union that represents most of the system’s faculty. That plan is “a sort of glorified sick leave,” he said, “and doesn’t help because you still have to do all the work for that course.”

A spokeswoman for the system said that it “made a very generous offer of additional leave for Covid-19 related issues,” but the union has rejected that offer.

he system’s plan to open campuses for face-to-face instruction this fall once again gives students and staff lots of time to plan. But it’s not clear that this early announcement provides as much clarity or that everyone is bullish about a return to campus.

In fact, campus life and the amount of in-person instruction could vary quite a bit by campus. The president of California State University at Chico, Gayle Hutchinson, announced early in February that only 20 to 30 percent of fall courses might be fully or partially in person because of ongoing state and county restrictions, along with the university’s limited amount of space in classrooms to social distance.

“There is no easy explanation of what this means for students,” Hutchinson said in a news release. “Depending on your major and your current progress toward graduation, it could mean a fully online schedule or one that is both in person and online.”

Melys Bonifacio-Jerez, a senior at Chico State who uses the pronoun they, said in-person courses are far better than remote instruction. But they are still concerned about the spread of Covid-19. “We’re all stressed. I’m definitely stressed,” they said. “I’m feeling like I can’t keep going to school, but I’m pushing because it’s important to me.”

“The responsible thing would be to remain remote for fall 2021,” Jerez said.

How much campuses can open for instruction will depend heavily on the availability of vaccines in the state, as well as the willingness of students and employees to get vaccinated, said Castro, the chancellor. Officials are still discussing whether they can or will require people to be vaccinated before returning to campus.

The faculty union lists vaccine availability as the first of 16 concerns they have about in-person instruction. Classroom space may still have to be adjusted and require extra cleaning, said Toombs, the union leader, and vulnerable faculty members will need options to continue to teach remotely. “What if there is an additional outbreak?”

The system is still waiting to see if the early announcement will pay off in strong enrollment this fall. Applications to the campuses are about 5-percent lower than a year ago, according to a spokeswoman, but many campuses are still accepting applicants.

White, the former chancellor, takes the long view, noting that the system is already enrolling more students than ever even in the midst of a global pandemic. “Come the fall of 2021, there will be a lot of students and faculty ready to be on campus,” he said, “but many others who have discovered that remote learning works as well.”