The Beginner’s Guide to Seeing an Opera 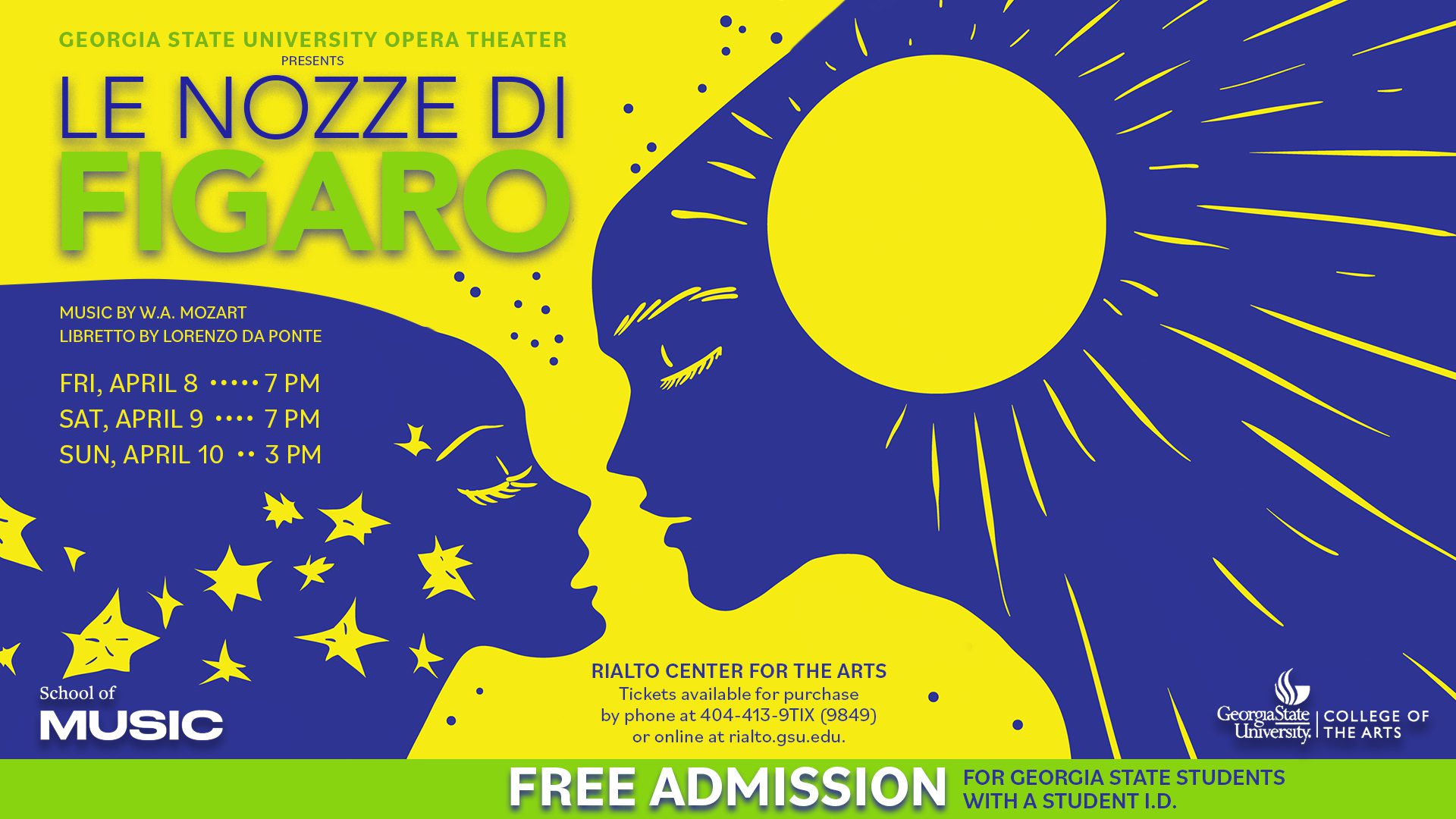 A night at the opera may seem like an intimidating experience for the uninitiated. A different language, an unfamiliar storyline, a few more high notes than you may be used to and concerns about obscure etiquette or dress codes; for many these seem like cumulative barriers to enjoying this historic art form.

That’s where we come in – let us break it all down for you and invite you to the Georgia State Opera Theatre’s upcoming production, Le nozze di Figaro, to put your new knowledge into practice! Did we mention the student tickets are FREE? Show your Student ID at the door for your free admission.

I’m thinking about going to the opera – how will I know what’s happening on stage?

It’s a great question, and some basic opera vocabulary can help. An opera is different from musical theatre in that it is entirely sung, there are no lines that are only spoken. But there are ways to break up the text you’re hearing: Arias and Recitative.

Most of the opera will be sung in recitative (ress-ih-tah-TEEV), which is designed to sound more like the rhythm of normal speech, even though it’s sung on pitch. When you hear recitative, you know the characters are moving the main plot along, telling a story, or giving the audience exposition to set a scene.

Arias (ARE-ee-ahs) are the big memorable song pieces from an opera. Arias are usually solo performances that pause the main action of a plot and expand on a feeling or idea. These are designed to carry more emotional weight and allow the singer to show off their skills.

For Figaro, it’s hard to choose our favorites because this show is stacked with greatest hits. Expect powerhouse performances from Alexandra Chappell, the soprano in the role of Susanna. You’ll see her on stage for nearly the entire performance as she lends her voice to five duets and two trios, not to mention taking center stage for a soulful solo in “Deh vieni, non tardar.”  Ryan Henry, a baritone in the role of Count Almaviva, deftly demonstrates his emotional range, conveying aggression and charisma by turns, depending on who shares the scene. Join us for this show, and you’re sure to be humming a new favorite of your own.

Want a preview of what’s to come? Check out this iconic performance of “Non più andrai” from Welsh bass-baritone Bryn Terfel, for whom the title character of Figaro was a signature role:

But how do I know what they’re saying if I can’t understand the language?

Don’t worry – we can’t either. For Le nozze di Figaro, the Rialto Center for the Arts will be using a common convention in opera performances called supertitles. When an opera is in a language not commonly spoken by the audience, facilities with the right technology can display supertitles with the translated lyrics above the stage, so you can easily glance overhead to follow along.

To get you started, Le nozze di Figaro, or The Marriage of Figaro, follows the title character and his bride-to-be, Susanna, through an eventful wedding day of intrigue, mistaken identities, schemes and battles of wits as the servants of Count and Countess Almaviva turn the tables on their employers.

But more than that, Opera Director Dr. J.J. Hudson notes, “The actors and I are working hard to present a theatrical work with clarity of physical action.  And this show will have plenty of physical action!  I believe that audiences new to this opera will be able to follow the story in real-time.” So be sure to stay tuned in to the characters, and you’ll be able to understand more than you expect!

What should I expect while I’m there?

You mean, other than a good time? No, we get it – if you’ve never been, it can be hard to know what the expectations are. Here are a few tips to help you feel like a pro:

Ok, I went to the opera, and I loved it – what should I see next?

We knew you would! From here, there’s a whole world of different types of operas for different tastes, but we’ll give you a few starting places.

One good place to start is what we call “The ABCs of Opera:” or Aida, La Bohème, and Carmen. These three gold-standard productions are mounted season after season by opera companies in major cities, meaning there’s a very good chance one of them will be coming soon to a city near you. Soaring set pieces and choruses in Verdi’s Aida, poignant characters and relationships in Puccini’s La Bohème, and unforgettable melodies from a provocative femme-fatale in Bizet’s Carmen make this trio the perfect broad foundation to build your familiarity with some well-known works.

And if you liked Le nozze di Figaro, be sure to check out its prequel, Il barbiere di Siviglia, or The Barber of Seville. Rossini’s follow-up to Mozart’s Figaro is something of an origin story, shedding more light on the relationships and conflicts you’ll see.

Dr. Hudson also wants everyone to know that not all operas are antiques. “It may surprise people new to opera that opera is still being composed.  Some operas premiered in the past twenty years include operatic adaptations of well-known novels and films such as Dead Man Walking, Our Town, The Grapes of Wrath, The Shining, The Little Prince, and Cold Mountain.”

Now that you’ve seen your first opera, you’re officially a “fan.” Come see us again and we’ll even call you a “buff.” Welcome to the club, you’re going to love it here.

A slideshow of images from the recent production of Le Nozze di Figaro can be found here.