‘Thanks for Letting Me Stay Awhile’ – NBC Los Angeles 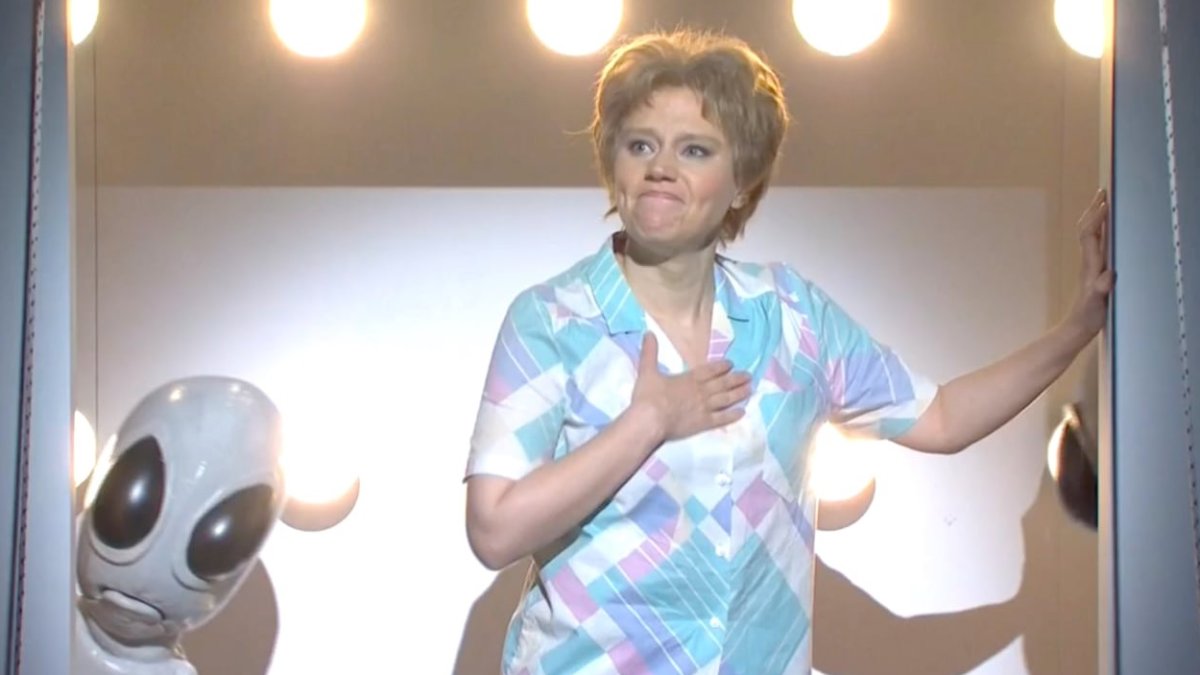 Kate McKinnon signaled the end of her 10-season “Saturday Night Live” run with a final — and ultimately emotional — take on her often abducted, reoccurring Mrs. Rafferty character, in this weekend’s cold open during the show’s 47th season finale.

The clip opened with Aidy Bryant and Mikey Day, as NSA agents in the Pentagon, and sustained applause — clearly directed at Bryant, who is also departing after the episode. McKinnon and Bryant are the longest-tenured cast members (following Kenan Thompson) with both joining the show in 2012.

The U.S. Government (Bryant and Day) are looking into verified alien abductions, and Mrs. Raffery has been abducted by aliens with two others (Cecily Strong and host Natasha Lyonne), but had a less-stellar experience than them.

McKinnon has played Ms. Rafferty in several episodes over the years, usually cracking up the guest hosts in the process — most notably with Ryan Gosling in 2015.

At the end of the sketch, the NSA agents said that the aliens wanted to offer Earth their advanced technology in trade for one of the ladies to return with them to space.

“Sure, why not?” she said. “I always kind of felt like an alien on this planet anyway.”

Without hesitation, Mrs. Rafferty volunteered, and as she walked up a walkway into the glow of the UFO’s entrance, McKinnon turned and, largely stepping out of character and through budding tears, said, “Earth, I love ya! Thanks for letting me stay a while.”

Pete Davidson appeared one last time during “Weekend Update” alongside co-anchor Colin Jost to discuss his tenure on the late night show, as hours before, he confirmed his exit from “SNL” in an Instagram post shared by his friend Dave Sirus.

“Hello, Colin and Che and millions of people only watching to see if I bring up Kanye,” Davidson began, referring to his very public feud with girlfriend Kim Kardashian’s ex.

Davidson explained that when he first auditioned for “SNL,” producer Lorne Michaels told him, “I don’t think you’re right for this show, so let’s screw this up together.”

“And that’s exactly what we did,” Davidson said. “And that’s why people who don’t think I deserve the job shouldn’t hate me, since we have so much in common. If anything, I should inspire hope that literally anyone can be on “Saturday Night Live.” Seriously, you see a guy bumming cigarettes outside a 7-Eleven at 2 a.m., that’s not some meth head, ‘That’s the next Pete Davidson!’”

He got visibly emotional as he closed things out by thanking “SNL” for “always having my back and allowing me to work on myself and grow.”

“And thank you to Lorne for never giving up on me and never judging me, even when everyone else was,” Davidson continued. “And for believing in me and allowing me to have a place that I could call home with memories that can last a lifetime.”

Reports of Aidy Bryant leaving “SNL” were also confirmed during a different segment on “Weekend Update,” as her and Bowen Yang’s popular “Trend Forecasters” added a touch of melancholy to their wildly over-the-top vibe.

The sketch involves Bryant and Yang telling the audience what’s “in” and trending; (“Grapes with seeds!” “Tying cherry stems with tongue to impress for sex!” “Watermelon! Sugar! Song!”) and “out” (“Navel orange!”)

The two berate co-anchor Michael Che and they try to make one another laugh by randomly slamming the desk, or trying to cram even more drama into a line reading as Bryant and Yang press their heads together.

In the last category the two perform, “Future Trends,” Bryant begins with, “In: Ten nice years” — signaling her tenure on “SNL.” Yang, with teary eyes, chimes in with, “In: A friend I couldn’t have done this without.”

Bryant follows up with “In: my best guys kissing me,” she says to end the sketch as both Che and Yang lean in for a smooch.

“Russian Doll” co-creator and star Natasha Lyonne hosted her first episode of “SNL,” speaking in her opening monologue about her Netflix series—which is back now for its second season following COVID delays.

“Gosh, will you look at this? I’m hosting the season finale of ‘Saturday Night Live.’ For a real New Yorker like me, that’s big,” Lyonne said up top.

“I have a show called ‘Russian Doll.’ The second season…just premiered on Netflix, and two things you really want to be associated with right now are Russia and Netflix.”

Lyonne went on to say that she’s “genuinely humbled” to be hosting NBC’s sketch series and that the truth is, she feels “a cosmic connection” to it. “The people here are my real-life chosen family. I’ve been coming here since I was a teenager,” remarked Lyonne. “I co-created ‘Russian Doll’ with Amy Poehler, and I have great friends from the show.”

Maya Rudolph and Fred Armisen came up on stage besides Lyonne, who asked Lyonne if she was busy, then proceeded to do their impressions of the host.

Following Armisen and Rudolph’s exit from the stage, Lyonne shared that she dated Armisen for a period of seven years.

“We’re the only couple with a sex tape nobody wanted to buy,” she joked, then transitioning back to discussing her love of the show.

Lyonne went on to discuss her history of being in the show business and auditioning for acting roles as a child.

The show cut to a clip of Lyonne as a kid in a 1986 appearance on “Pee-wee’s Playhouse,” which she joked is her “best work” to date, show “Anyway, I do some TV, my mom and I move to the Upper East Side. Suddenly, I’m in the movies,” said Lyonne. “Oh, I was in all those ’90s movies: ‘American Pie,’ ‘American Pie 2,’ ‘American Pie in the Multiverse of Madness,’ et cetera. Oh, and a cult favorite called ‘But I’m a Cheerleader.’”

Lyonne said that she went “to hell and back” at that time, and that life was once rough. “But just like when Fabio was on that rollercoaster and the bird flew in his face…Hey, do we have a photo of that?” she asked, as a shot of a bloody-nosed Fabio came on the screen.

“Yeah, yeah. Yeah. Just like when that happened, I brushed myself off, and I got back on the ride. And now I’m here,” Lyonne continued.

“All right, so I’m conflating events, glossing over entire decades. But I’m here, and I’ll tell you what I’ve found. There’s always hope in despair, and there’s always a reason to get back in the ring and fight another day.”

“Saturday Night Live” is scheduled to return in the fall of 2022 after the summer break.