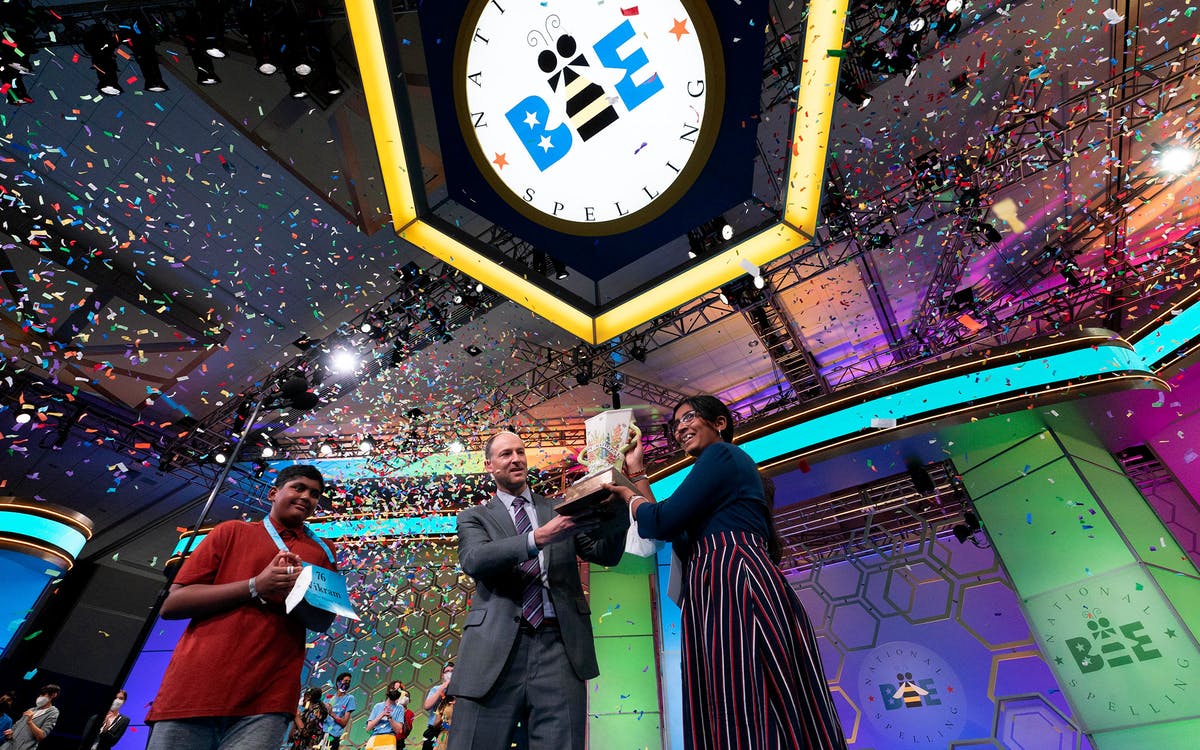 WHO: Harini Logan, a fourteen-year-old from San Antonio who knows how to spell.

WHAT: The Scripps National Spelling Bee.

WHY IT’S SO GREAT: So the Mavs flamed out. The Cowboys are back to waiting till next year. The Astros are coming off a rough World Series loss. The Stars, which are a professional hockey team from Dallas, missed the conference finals. What’s a Texan who wants to engage in some good old-fashioned sports jingoism to do? May we suggest: getting a tattoo with the name “Harini Logan” on your bicep, to celebrate the fourteen-year-old San Antonio middle school student who took first place last night at the Scripps National Spelling Bee!

Harini’s win came in a new format for the bee, which has run almost continuously since 1925 (it went on hiatus during World War II and skipped 2020 for COVID). She won a spell-off, an intense spelling shoot-out instituted after the 2019 bee ended in a downright un-American eight-way tie for first place. In the spell-off, Harini and her opponent, Colorado twelve-year-old Vikram Raju, were each given ninety seconds to spell as many words correctly as possible. And Harini was dominant in overtime, notching a rapid-fire 22 correctly spelled words to Vikram’s 15 to claim the prize.

It wasn’t the only dramatic moment in Harini’s quest for glory. Earlier in the event, during the “word meaning” round, when the young contestants have to prove they also know what the polysyllables they’re spelling mean, judges struggled to determine if she had correctly defined “pullulation,” which Merriam-Webster defines as both “swarm, teem,” and “to breed or produce freely.” Harini’s bell had dinged when she called it the nesting of mating birds, as judges had sought an answer related to the swarming of bees. (The root of “pullulation” is “pullus,” which means “a young bird in the downy stage.”) Upon review, the judges acknowledged that the contest’s myopic view of pullulation was a disservice to Harini’s understanding—and set up the dramatic finale.

Harini’s victory caps off a downright dominant run for Texas in the Scripps competition, as she becomes the seventh Texan in the past ten contests to finish in first place. The next-closest states are California and New York, which each have three winners in the past decade (because of years with multiple champions, the Spelling Bee has had twenty first-place finishers since 2012), making us the unequivocal home of the nation’s finest spelling talent. Harini’s victory came in her fourth year in the competition (her best previous finish was at number thirty, in 2019), and her victory means the end of her Scripps career, as champions graduate out of future contests.

Texans with an eye to the future have reason to be optimistic, though: among the twelve finalists was eleven-year-old Kirsten Santos, from Katy, whose impressive performance—with many years of eligibility ahead of her—spells D-O-O-M for states that think their spellers might challenge Texans’ dominance in the storied event.

Wendy Davis, Donna Howard worry the worst is yet to come after Roe falls