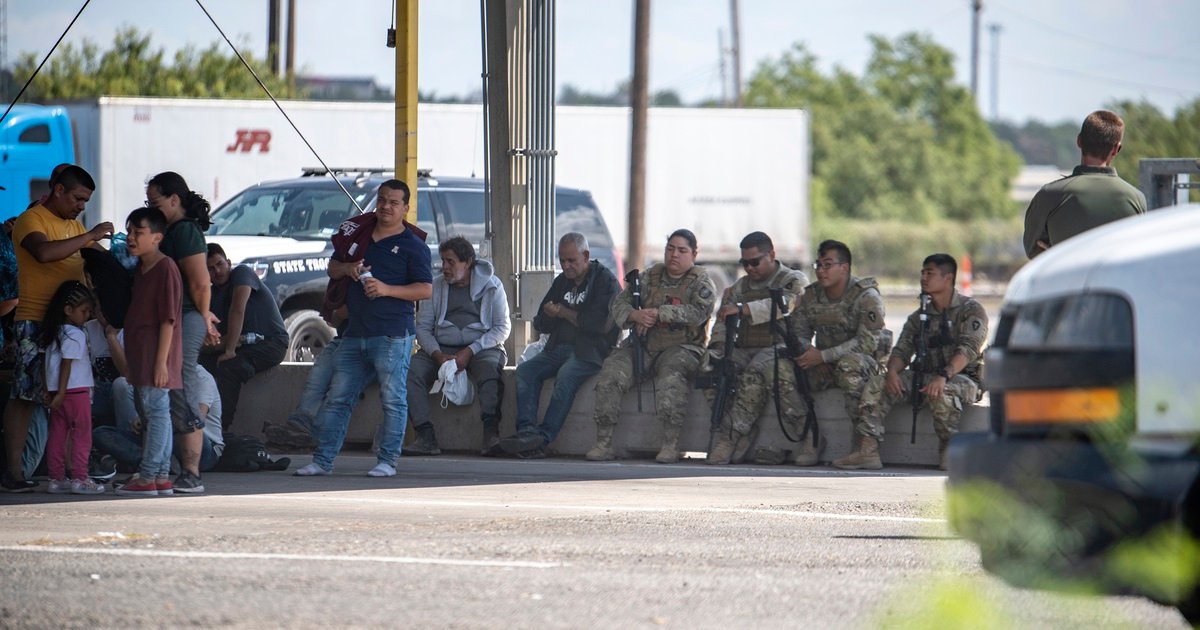 This article is co-published and co-reported with Military Times, an independent news organization reporting on issues important to the U.S. military. Sign up for its daily Early Bird Brief newsletter here.

Texas National Guard troops deployed to the border by Gov. Greg Abbott could be stuck paying hundreds or even thousands of dollars in unexpected federal taxes for their work on Operation Lone Star because of a payroll error made by state officials.

On Thursday, officials with the Texas Military Department acknowledged that the payroll system they used for the mission has withheld too little in federal taxes from service members’ paychecks since October 2021, when Abbott ramped up the number of troops on the mission from 2,500 to a peak of 6,500 in November. Many of those called up after November came to the mission involuntarily.

Officials said they became aware of the issue in July 2022.

“TMD and OLS responded to this issue rapidly through publications, command guidance, town halls, and other means to accomplish full awareness and support individual adjustments to tax withholding forms as needed,” the department’s public affairs office said in an emailThursday.

The tax blunder is the latest strike against a state bureaucracy that has been strained under the weight and haste of Abbott’s border mission. Previous missteps in 2021 included widespread problems in which soldiers were paid late, too little or not at all for months. Guardsmen have also complained about financial strains due to the unprecedented length of the deployment, which has prevented some members from being able to keep their civilian jobs.

The department did not answer specific questions from The Texas Tribune and Army Times about the overall cost of the error to Operation Lone Star personnel. Abbott’s office did not respond to a request for comment.

In the email, officials explained that the payroll system was set up to pay service members twice a month, rather than once a month, to mirror federal pay periods. Doing so led to the tax withholding error, which may affect 96% of service members on the mission who are paid twice a month, according to documents obtained by the Tribune and Army Times.

Officials said all service members on Operation Lone Star will be returned to once-a-month paychecks starting in January to fix the problem.

But some service members reached by the Tribune and Army Times said they had not been made aware of the problem.

One Air National Guard member who left the mission in May said he’d never heard of the withholding shortfall when reached by the Tribune and Army Times. But he did complain that the state still hasn’t paid his $1,100 travel voucher reimbursing his final trip home.

“I was wondering why I was making so much,” lamented one Army officer. “Wow. Just wow.”

Another service member who learned of the issue a few days before leaving the mission in September said troops had raised concerns about the withholding of taxes on their paychecks since last winter, when the mission was experiencing other pay problems.

“We questioned about it at the time and they said ‘Oh, everything’s all right,’” he said. “They told us everything was good.”

But the recent announcement of the tax issue has felt like another item added to a long list of grievances with the mission, he said.

A group of outgoing troops asked Maj. Gen. Win Burkett about the tax issue during a question-and-answer session of a briefing at Camp Swift near Austin in September, according to the service member. Burkett said the department’s leadership had known about the issue for months and he did not understand why troops had not been told, the service member added.

TMD officials did not respond to a request for comment on the interaction.

Troops also asked what kind of support the department would provide them in navigating their taxes because of the mistake.

“[We] basically got told it’s on the individual soldier to figure it out and that’s moreso what the frustrating part was,” the service member said. “Because that’s the typical answer that we’ve gotten from the Texas Army National Guard, like ‘hey, we need help’ and they basically just say, ‘well, you just are going to have to figure it out.’”

The service member said he was disappointed that there has been no investigation into the issue or a move to hold officials accountable.

“If it was someone like us low-level soldiers, we would have been held accountable,” he said.

Estimating what each member owes is complicated due to the different tax rates for different portions of their pay, which itself varies based on rank, experience, marital status and what kind of duty the Guard member is performing.

Generally, troops who make less money and have more dependents claimed on their taxes will owe less.

But some already know what their bills will be (several troops’ names are being withheld for fear of retaliation):

One of the state’s former adjutants general, retired Maj. Gen. Charles Rodriguez, declined to comment on the specifics of the tax issue because he did not have firsthand knowledge, but said in general, commanders should move quickly to fix administrative problems and notify soldiers quickly when they arise.

“When commanders can fix an administrative problem but choose not to, such avoidance can approach dereliction of duty,” Rodriguez, who retired in 2009 after nearly four years as the Texas Guard’s top general, told the Tribune and Army Times in an email. “When they cannot fix the problem soon or at all, then transparency and offered assistance are what they owe their soldiers.”

He also said he “trust[s] military commanders to take care of their troops and families, keep them informed and supported with solutions, and engage helpful partners if appropriate.”

Rodriguez added that he supports soldiers addressing their pay issues outside the chain of command if their typical administrative avenues aren’t helpful.

“They should invite pressure from elected officials and public opinion where such assistance is needed to remove immovable bureaucratic obstacles and receive fair and reasonably expected treatment,” Rodriguez added.

State Rep. Alex Dominguez, D-Brownsville, who has been critical of the treatment of soldiers on the mission, is calling on the Texas Military Department to provide immediate clarification and resolve the issue before January. If the department does not have funding to address it, he said the state Legislature should consider using its estimated $27 billion surplus to help service members.

“This issue must be addressed now — we cannot inflict further financial instability on our service members and their families,” Dominguez said in a letter sent to Maj. Gen. Thomas Suelzer, the Texas National Guard’s top leader, on Thursday.

Finance personnel recently added the withholding issue to the briefings they give troops when they depart the mission, which includes average projected income tax estimates by annual taxable income.

Another service member in the Air National Guard said supervisors are providing troops with tax classes to help them work through the issue.

But for those who went home before knowing of the problem, there’s little left to do but brace for impact.

The junior soldier who owes $1,300 was succinct when asked to describe the situation: “Shitty.”

“Thankfully, I have money for it,” the soldier said. “But I know soldiers who don’t … [and] we haven’t heard anything about anything for tax relief.”