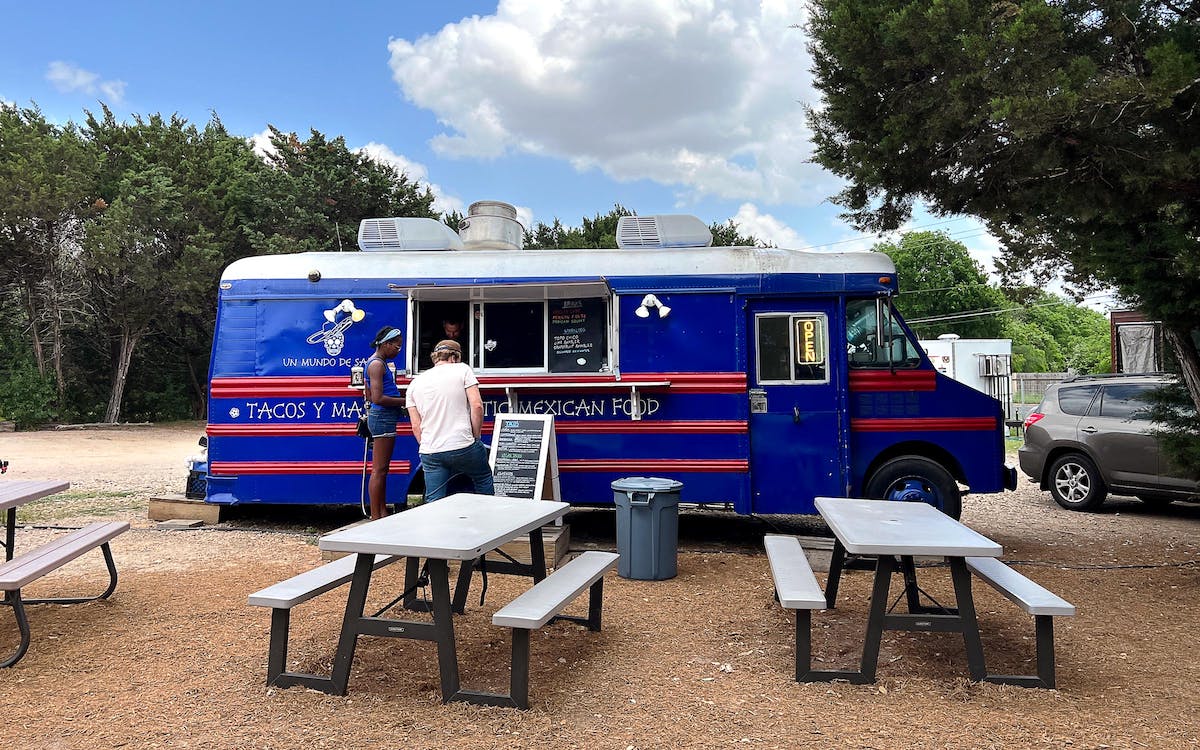 Luis Mendoza held down two jobs in Austin to make ends meet for his family. In the mornings, he helped a baker prepare kolaches; and in the evenings, he worked as a sous chef at pioneering Mexican restaurant La Condesa. At the latter, he worked alongside some of the best chefs and taqueros in the state, including Fermín Nuñez of Suerte and Daniel Fox of Taconeta in El Paso. But it was another colleague who helped Mendoza open his own taqueria, Un Mundo de Sabor.

Abraham “Flaco” Diaz, a former La Condesa butcher, owned a food truck but was looking to step away from it. Mendoza was interested in buying it from him, but it was a volatile time for the El Paso native. The young chef had just started working at an Italian restaurant, and his girlfriend, pastry chef Amanda Hernandez, was pregnant with their second child. He mentioned to Hernandez that he was thinking of buying the truck, but she responded with doubt. She pointed out that she was pregnant and their first child was still just a baby, never mind that they needed to keep up with the high cost of living in Austin. When Mendoza gave Flaco the down payment, Hernandez was furious. “How are we going to do this?” she kept asking. “This is one of the happiest days of my life, and honestly, you’re making me feel horrible,” Mendoza responded. Hernandez felt like she had let down her partner when he needed support, even though her concerns were justified. She agreed to back him up, and even signed on as co-owner and pastry chef. “I understand that this is your dream now,” Hernandez recalls telling him. “I’m going to be here. I’m going to do anything I can to make it happen with you.”

Along with the truck, the couple inherited its name. The new Un Mundo de Sabor opened in December 2020, and it couldn’t have gone worse. “I had this weird picture in my mind that I was going to see a lot of familiar faces,” Mendoza says. He thought he’d get a bunch of fist pumps and excited salutations from friends, former colleagues, and service industry workers. But none of that happened. The few customers he did have were looking for the Guanajuato-style Mexican food the previous owner had served, and most of them turned on their heels after realizing that Mendoza served West Texas border-style Mexican food. His idyllic vision of entrepreneurship morphed into a dark veil of self-doubt. “Who the hell am I to open a business like a food truck?” he thought. Mendoza even tried to return the truck, but Flaco told him in no uncertain terms that what he was experiencing was business ownership. He needed to work through the rough start. Mendoza’s perseverance is paying off. Un Mundo de Sabor is one of Austin’s best taco trucks.

His tacos—all on tortillas from Tortilleria Rio Grande in Austin—are filled with items like ethereally lean and perfectly flavored 44 Farms beef cheek barbacoa, Berkshire pork carnitas, and buttery, chunky guacamole. The campechano is a mixture of Black Angus carne asada and house-made chorizo under a snappy costra. There’s al pastor as well as specials, including the northern Mexican mixed-meat preparation of discada.

But first he had to contend with his location, the parking lot of a former bank on William Cannon Drive near Menchaca Road in South Austin. Mendoza hustled to bring in customers. He created social media profiles, he posted on the El Pasoans Living in Austin Facebook group page, and he rebranded with a small Mexican sombrero-accented calavera logo. It seemed to work. Customers, many of them El Pasoans, sought out the truck. Mendoza was working hard, doing what he could when he could, and it was incrementally paying off. “There were a couple of Sundays that we were super busy, and we thought we were finally getting there,” Mendoza says.

Then, in November 2021, a month before the Un Mundo de Sabor’s first anniversary, a COVID testing site was erected in the same lot. Its location blocked traffic to the truck. Not only did the testing site cause a reduction in business, it also made Mendoza the target of harassment. Whenever he arrived to prep for service, those who were waiting in the queue for COVID tests, as well as the test-site operators, thought he was attempting to cut in line. The situation got so bad, the taquero decided to temporarily shut down Un Mundo de Sabor.

It was about that time that Mendoza was approached by Adam Diaz, owner of the Thicket food truck park, on a wooded stretch of South First Street. Diaz, who regularly brought his family to the original Un Mundo de Sabor location, asked Mendoza if he’d be interested in moving to the Thicket if a spot opened up. The offer was tempting, but the taquero was worried about the unknown variables that come with a change of venue. Shortly thereafter, Diaz returned with an official offer. Mendoza and Hernandez rolled Un Mundo de Sabor into the Thicket in February 2022, and it quickly became a hit. “We had no idea how long the lines would get,” Mendoza said with awe in his voice.

Both of my visits required waiting in line, and I’d happily wait every time—especially for Mendoza’s enchiladas. He stuffs three rolled corn tortillas with salty, gooey Muenster cheese—an El Paso Mexican food essential—and lacquers in an earthy red salsa. To top them off, he gives them quick squiggle of crema, a sprinkle of queso fresco, and garnishes of avocado, pickled onions, and chiles. They’re different from guajillo chile–based Tex-Mex enchiladas. This sauce uses a Juárez import, chile colorin (a regional name for pasilla chile), whose flavor doesn’t overwhelm your palate. And Un Mundo de Sabor’s enchiladas are light—they are not an over-cheesed casserole simulation.

The truck offers a bevy of delightful vegetarian options with taco fillings that use real produce. The cauliflower al pastor balances char and caramelization, and has a natural, pleasant chewiness. It’s visually pretty too, with the vermillion tint of the marinade juxtaposed with the vegetable’s off-white color. The garnishes include cilantro cut into ribbons, pineapple chunks, and brambles of pickled red onions. The mushroom and kale taco in a corn tortilla is smeared with a bright white bean–lemon puree. It’s just enough to keep the greens and woodsy oyster mushrooms from Austin’s Hi-Fi Mycology from tumbling out of the taco as you bite into it. Shallots add a subtle sharpness.

However much you eat, get back in line to order the tres leches. Made by Hernandez, whose résumé includes a stint at the JW Marriott Austin, the dessert is served in a round to-go container in a pool of the cinnamon-dusted milks. Sitting in that beautiful liquid is an impossibly airy cake topped with strawberry slices and marzipan cookie crumbles cascading into the sweet pond.

Folks are catching on to Un Mundo de Sabor’s greatness. Business continues to improve despite the triple-digit temperatures, Mendoza says. In early August, Mendoza and Hernandez gave the truck’s exterior a new wrap, one that leans hard into the calavera imagery. It’s gorgeous and colorful. There’s a flair to it, one that matches the quality of Un Mundo de Sabor’s food.