Texas May 24 primary runoff elections: What you need to know 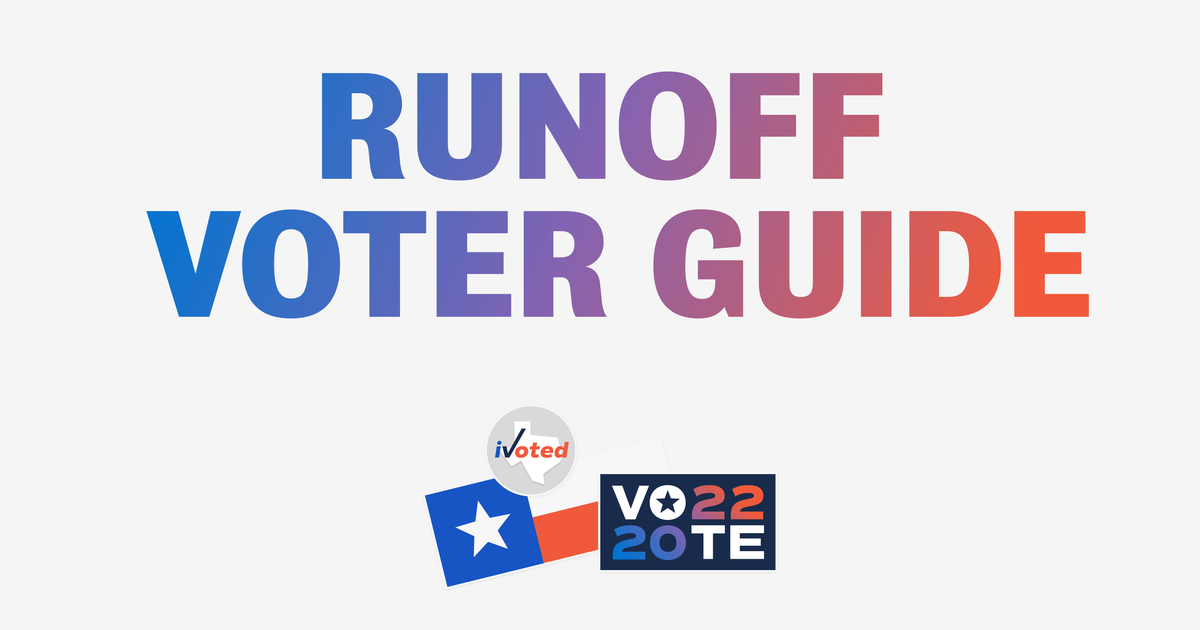 How do I know if I’m eligible to vote by mail?

This option is fairly limited in Texas. You’re allowed to vote by mail only if:

What identification do I need to vote by mail?

The Texas Legislature last year created new identification requirements for voting by mail that require voters to provide their driver’s license or state ID number or, if they haven’t been assigned those, the last four digits of their Social Security number on both the application for a ballot and the envelope used to return a completed ballot. If they don’t have either, voters can also indicate they have not been issued that identification.

More than 24,000 Texans lost their votes in the March primary because roughly 12.4% of mail-in ballots were rejected under the new voting law. The secretary of state’s office said it’s critical for voters to remember to add a license or ID number to their ballots.

“The issue that we saw was a lot of people just left that number off on the mailing ballots,” Taylor said.

Ahead of the March primary, hundreds of voters’ applications for mail-in ballots were also rejected, in some cases because they provided a license number that the state didn’t have on file. As of Dec. 20, a reported 493,823 registered voters didn’t have a driver’s license on file, which is the first number voters are asked to provide on both applications to register to vote and applications to vote by mail. The secretary of state has suggested contacting your local voter registrar to ask about how to add one of the required numbers to your voter registration record.

Other voting advocates suggest voters include both their driver’s license or state ID number and the last four digits of their Social Security number, if they have both, to avoid issues.

Does lack of immunity to COVID-19 qualify as a disability during the pandemic?

While a lack of immunity to COVID-19 alone does not allow a voter to request a ballot based on disability, the Texas Supreme Court ruled in 2020 that it was up to voters to decide if that lack of immunity, combined with their medical history, allows them to meet the state’s eligibility criteria.

Take note that the Texas election code’s definition for disability is broader than other federal definitions. A voter is eligible to vote by mail if they have a “sickness or physical condition” that prevents them from voting in person without the likelihood of “needing personal assistance or of injuring the voter’s health.” It’s up to the voter to decide this, and election officials don’t have the authority to question a voter’s reasoning.

What kind of postage do I need to return my mail-in ballot?

It depends on where you live. Postage for mail-in ballots will vary by county because the style and size of the ballot could be vastly different from county to county — and some counties may pay postage for you. Local elections offices should have the specifics once ballots are finalized. That said, if you don’t have enough postage, your ballot is not supposed to be returned to you. Instead, the Postal Service is supposed to deliver the ballot and bill the county for the insufficient or missing postage.

What if there’s an issue with my mail-in ballot?

This will be the first major election in which Texas will allow voters to correct their mail-in ballots if they are at risk of being rejected for a technical error, including missing information or signatures. This also applies to issues with the applications for those ballots. County officials are responsible for alerting voters if there is a defect with their application or ballot.

Voters can use a new online ballot tracker to check the status of both their application to vote by mail and their ballot. The tracker can also be used to make corrections. You can access the tracker here.

Disclosure: The Texas Secretary of State has been a financial supporter of The Texas Tribune, a nonprofit, nonpartisan news organization that is funded in part by donations from members, foundations and corporate sponsors. Financial supporters play no role in the Tribune’s journalism. Find a complete list of them here.

Juicy, Crispy Smoked Chicken Is Having a Moment – Texas Monthly