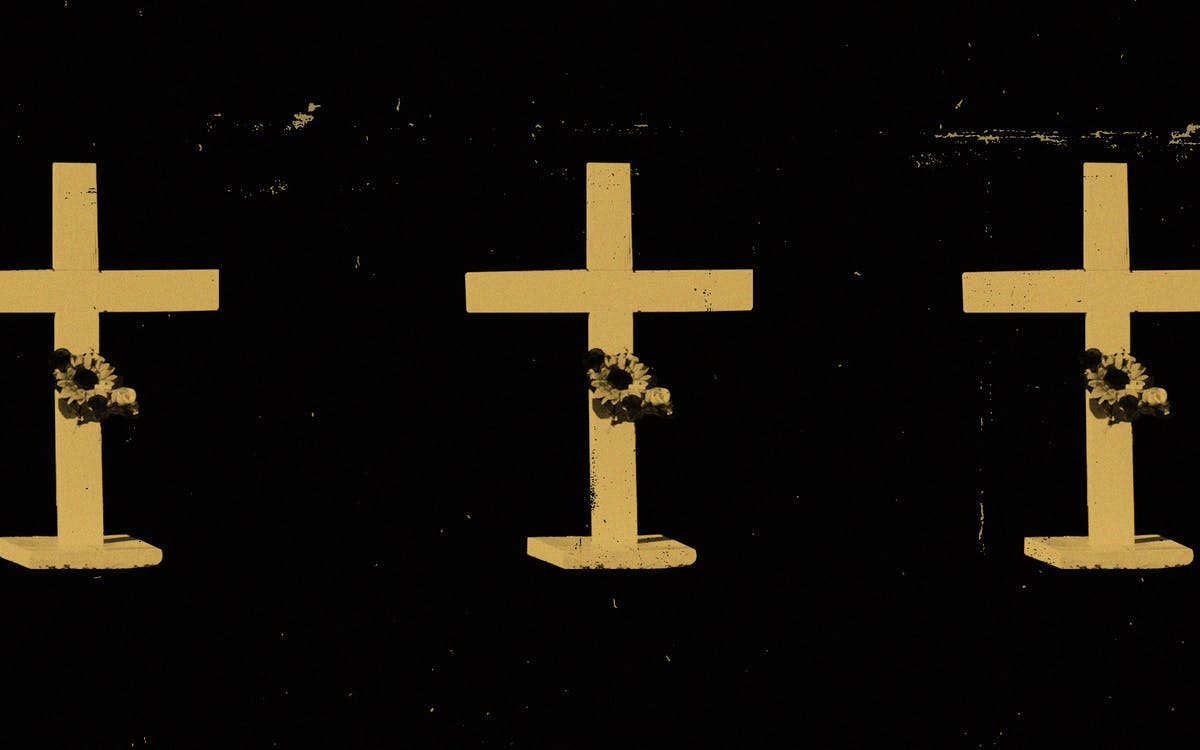 The most terrifying thing about each mass shooting is this: the knowledge that nothing will change, and the violence will happen again and again and again. Yesterday, El Paso. Today, Uvalde. Tomorrow, maybe your town—or mine. And this is just to speak of mass shootings, those headline-grabbing bloodbaths that punctuate the daily carnage of gun-related homicides, accidental shootings, and suicides.

In the aftermath of the unspeakable violence in Uvalde, I hear lots of heartbroken people saying, “We can’t go on like this.” I empathize with the sentiment, but the phrasing isn’t quite right. What we mean to say is that we shouldn’t go on like this. But, alas, we will, at least for the foreseeable future. We know this, in part, because our elected officials have told us so. Texas attorney general Ken Paxton, fresh off his demolition of George P. Bush in Tuesday’s primary runoff, offered the most blunt version in several interviews with right-wing media. School shootings “will happen again, we know it’s going to happen,” the state’s top law enforcement official told Fox News. To Newsmax, he said, “I’d much rather have law-abiding citizens armed and trained so that they can respond when something like this happens, because it’s not going to be the last time.”

Other elected officials have advertised their unwillingness to address the root problem—the superabundance of high-powered weaponry—in more indirect ways. Lieutenant Governor Dan Patrick, who once seemed open to modest gun-control measures, such as background checks, seems to have settled on a diminishingly small policy idea. For at least the last four years, at least since the 2018 shooting that left ten dead at Santa Fe High School, Patrick has returned over and over to the idea that fewer doors in schools would save lives. “We have to harden these targets so that no one can get in ever except through one entrance,” he told Tucker Carlson on Tuesday.

Even Patrick seems to intuit that his idea is half-hearted. “Maybe that would help,” he told Carlson. “Maybe that would stop someone.” Maybe! Patrick has been the leader of the Texas Senate for more than seven years, plenty of time to implement his school-hardening ideas—installing metal detectors, vehicle barriers, active-shooter alarm systems, armed teachers, etc.—and to see them produce few to no tangible benefits, including in Uvalde.

For his part, Governor Greg Abbott has been incapable of demonstrating anything other than a grim determination to soldier on into the darkness. Like Patrick, he once offered feeble support for modest gun measures, only to wilt in the face of pressure from the NRA and Second Amendment absolutists. Instead, he gleefully signed off on laws expanding access to firearms, including a “permitless carry” law that went into effect last September, allowing Texans 21 and older to openly carry a handgun without a license or training.

This time around, with the bodies still cooling, he could barely muster even a whiff of an idea for stopping the carnage during his Wednesday press conference in Uvalde. Instead, the governor recited the tired cliché that big-city gun violence in blue states somehow proves that no action is needed in Texas or the nation as a whole. “I hate to say this, but there are more people shot every weekend in Chicago than there are in schools in Texas,” he said. “And we need to realize that people who think, ‘Well, maybe if we implement tougher gun laws, it’s going to solve it,’ Chicago and L.A. and New York disprove that thesis.”

Abbott is by all accounts an intelligent man, a careful student of law and policy. He wrote a whole book on amending the Constitution and served early in his political career as a judge. He is a firm believer in the power of law and order to ensure public safety, going so far as to promise last year, for example, to “eliminate all rapists” in the state. He must know how unserious he sounds. The fundamental truth of gun violence in America, after all, is not hard to grasp: out of all high-income nations, we have the weakest gun laws and the highest rate of firearm-related deaths. Mass shootings almost never occur in other countries. Second Amendment fundamentalists simply do not have a good answer for this. Take Senator Ted Cruz, for example. When he was confronted this week by a British journalist asking, “Why does this only happen in your country?” Cruz seemed sincerely angry—a rare human moment for the famously oleaginous politician—and cut the interview short.

But to pretend that this is a high-minded policy debate is to miss the point. Arming teachers, school doors, Chicago—it’s all an attempt to, as Steve Bannon put it, “flood the zone with s—,” to distract from the reality that virtually no Texas Republican elected official wants to do anything. The intellectual debate is basically over; those who support gun safety have won on the evidence and also, mostly, in the court of public opinion. That’s why the defenders of the status quo seem to have such risible proposals or beg for the debate to be perennially postponed. They can’t win on the merits, but they don’t need to. This isn’t a moot court or public policy school; it’s America in 2022, a teetering democracy where an alarming swath of the heavily armed populace seems primed for another civil war.

And if you look behind the policy scrim, you’ll instead see all manner of theological justifications for encouraging a culture awash in gun violence. State representative Matt Schaefer, a low-key conservative from Tyler, nicely distilled two tenets on Twitter yesterday. “Legislation cannot solve the sin problem,” he wrote in one. (This is a simpler, more explicitly religious way of saying mass shootings are the result of mentally ill psychopaths who can’t be stopped, a common talking point among 2A absolutists.)

This is a position that goes beyond “constitutional carry,” which holds that the Second Amendment prescribes a fundamental right to carry firearms without first obtaining a license or training. But Schaefer sees 2A as divinely ordained, God’s will on earth. As with anti-abortion absolutism, there really isn’t any room for nuance here. What’s the point of debating the meaning of “well-regulated militia” when you can see God down the sights of your AR-15?

In the absence of meaningful change, or even the expectation of change, what are we left with? A general, society-wide atmosphere of imminent violence that encourages ordinary citizens to buy more weaponry and some of us to use it, a gift to would-be authoritarians and far-right activists. America is already home to more guns than people. We are in an arms race with ourselves, and there’s no end in sight.