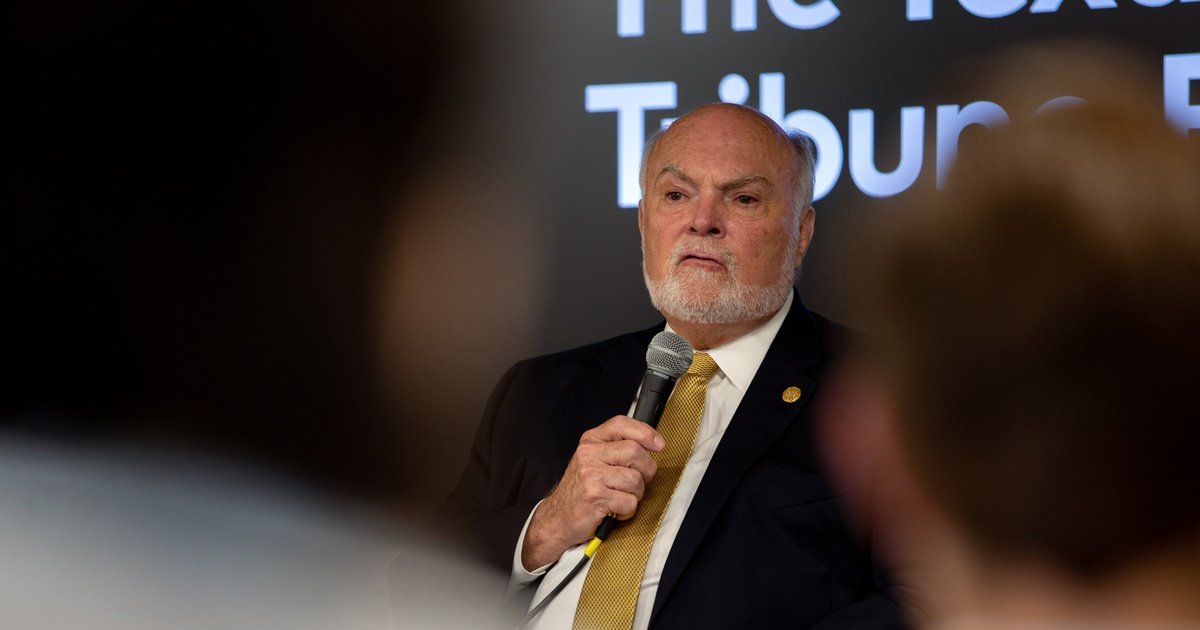 A leading statewide anti-abortion group suspended its endorsement of state Sen. Robert Nichols this week after the Republican leader from Jacksonville said he’d support a loosening of Texas’ abortion ban.

Nichols, who is up for reelection in November, said Friday during the 2022 Texas Tribune Festival that he’d vote in favor of an exception to Texas’ abortion prohibition in cases of rape.

In a Twitter thread on Monday, the Texas Right To Life organization said it was “deeply disappointed” by the East Texas senator’s comments and that it would not support any politician who “selectively chooses which children should have the Right to Life.”

“How politicians view exceptions reveals whether they have a consistent ethical principal motivating their pro-life views, or if its kind of a surface value,” Texas Right to Life President John Seago said in an interview with The Texas Tribune. “The comments we heard from Sen. Nichols shows there’s a distinction between us and him.”

Seago added that after Nichols made his comments on Friday, he spoke with the senator to understand his views on abortion.

“We had that conversation, and it is evident that we are still not unified on how we address these issues,” Seago said.

Nichols did not clarify over the weekend whether he’d support other changes to the abortion laws, such as an exception for the procedure in cases of incest. And he declined to comment for this story.

Texas’ near-total abortion ban went into effect after the U.S. Supreme Court overturned the constitutional right to abortion this summer. The state’s abortion ban is one of the most stringent in the nation, with no exceptions for rape or incest. The procedure is prohibited in almost all cases, except to save the life of a pregnant person, and performing an illegal abortion is a felony punishable by up to life in prison.

Nichols is one of the longest-serving Republican state senators, and he represents a part of Texas that has historically led the fight against abortion. Nichols has a strong anti-abortion record, and he has kept the support of Texas Right to Life since he first won the Senate seat in 2006.

Last year, Nichols voted in favor of the Human Life Protection Act — the legislation that triggered a rollback of abortion access after the U.S. Supreme Court decision — which was signed into law by Gov. Greg Abbott.

Texas Right to Life bills itself as the oldest and largest “pro-life” organization in Texas. Its views, however, are not consistent with other anti-abortion organizations.

Texas Alliance for Life, an anti-abortion organization based in Austin, has not wavered in its support for Nichols since his comments this weekend.

“We valued his support for the Human Life Protection Act when it passed in the last legislative session without the rape and incest exception,” said Amy O’Donnell, the organization’s spokesperson. She said that while Texas Alliance for Life does not favor any weakening of the abortion laws, the organization’s support for Nichols “has not changed.”

Angelina County Republican Party Chair Bob Flournoy shared a similar sentiment, calling himself a longtime supporter of Nichols. While Flournoy disagrees with the senator about abortion — Flournoy said he does not support an exception for rape — he will still support Nichols in the upcoming election.

“Whether I agree with him or not, I think he deserves our full support,” said Flournoy, an attorney in Lufkin.

Seago, of Texas Right to Life, said it was “mind-boggling” to hear that other groups that bill themselves as pro-life would continue to support Nichols.

“It reveals a fundamental misunderstanding of what it means to be pro-life,” said Seago. “To say that you’re going to punish the child for a sin of the father — that misses the point. That’s pro-life 101.”

Iran targets Kurds sheltering in Iraq: ‘We’re being used as a scapegoat’