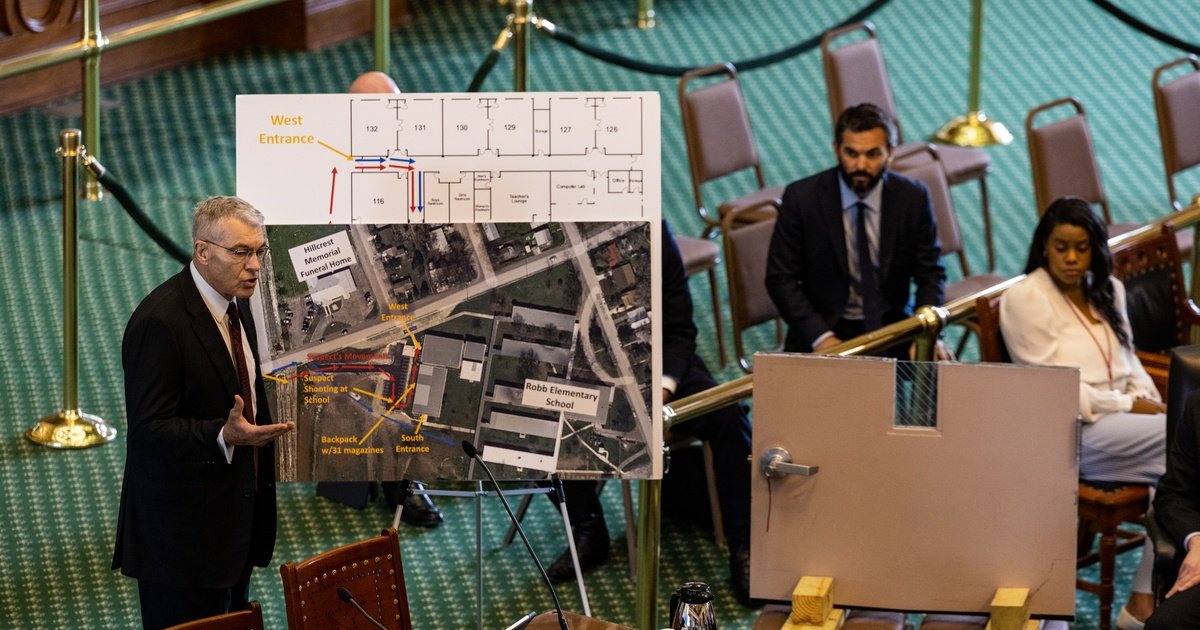 Department of Public Safety Director Steve McCraw told a state Senate committee Tuesday that the law enforcement response to the Uvalde school shooting was an “abject failure” and police could have stopped the shooter at Robb Elementary School three minutes after arriving were it not for the indecisiveness of the on-scene commander, who “decided to place the lives of officers before the lives of children.”

The revelations detailed by McCraw completed a remarkable shift in the police response narrative state officials have given since the May 24 shooting. Twenty-seven days after Gov. Greg Abbott said the shooting “could have been worse” but for officers who showed “amazing courage by running toward gunfire,” his state police director described stunning police incompetence that bordered on cowardice.

Arredondo, who testified in closed session to a House committee on Tuesday, told The Texas Tribune that after he and another officer determined the doors to the adjoining classrooms containing the shooter were locked, the best course of action was to wait for more officers, firepower, keys and a breaching tool.

McCraw laid out a starkly different set of facts: That officers with rifles arrived within minutes and the classroom doors could not have been locked from the inside. Reporting by The Tribune revealed that ballistic shields and a breaching tool, called a Halligan bar, were also quickly on scene. He also told lawmakers that sometime before the shooting that the teacher who taught in the conjoined classrooms 111 and 112 had flagged to the school administration that the door would not lock.

McCraw said though the state police are a far larger agency than the six-person Uvalde Consolidated Independent School District department, Arredondo was the rightful incident commander because he was the most senior first responder who had immediate jurisdiction over the district’s campuses. He said Arredondo could have transferred command to another agency, such as state troopers who arrived, but never did so.

Acting against the orders of an incident commander during an emergency can be dangerous and chaotic, McCraw said, responding to a question about why his troopers did not take charge. But he said the failure of one police agency means all law enforcement performed unacceptably that day.

“I don’t mean to be hypercritical of the on-scene commander,” McCraw said. “But those are the facts … this set our profession back a decade.”

As the school’s police chief, Arredondo was the rightful incident commander, said Gil Kerlikowske, a former Seattle police chief who led U.S. Customs and Border Protection between 2014 and 2017. But if he wasn’t performing that duty and if police knew this and the shooter continued to fire freely, he said larger agencies like the city or state police could have encouraged Arredondo to hand control to someone else.

“It is a bit difficult, but once you’ve made an assessment there are children in jeopardy that need medical care, then it almost seems like you’re going to want to bully or intimidate that person into relinquishing command,” Kerlikowske said. “You’re going to say, ‘My God, we know we’ve got people we need to rescue.’”

McCraw’s comments were the most extensive from DPS since the initial days after the shooting nearly a month ago. On May 25 and 26, the state police laid out the first accounts of how police responded, only to retract key elements, including that the shooter was confronted by a school resource officer before entering the school (he wasn’t, they later said) and that a teacher had left the door through which the shooter went in unlocked (she didn’t, they later said). Abbott said he had been misled by police about what happened and was “livid,” but has repeatedly declined to identify the source of bad information, which Arredondo denies came from him.

After weeks of silence, McCraw appeared before the committee and gave a meticulous account of the shooting from a detailed timeline his department had prepared with the help of the FBI. Dressed in a business suit rather than his uniform, McCraw spent more than three hours answering questions and pointing to diagrams of the school that state troopers brought. McCraw said he would release school surveillance and officer body camera footage when he receives permission from the Uvalde County district attorney.

He shared that at one point during the response, a Uvalde school police officer Ruben Ruiz, whose wife Eva Miralez was a teacher killed in the school, had been detained by other officers as he tried to enter the hallway to get to her.

“We’ve got an officer, Officer Ruiz, whose wife called in and said she’d been shot and she was dying. So certainly those things. What happened to him was he tried to move forward in the hallway. He was detained, and they took his gun away from him and escorted him off the scene,” McCraw told lawmakers, though it was unclear what officer detained Ruiz.

Tuesday’s meetings of House and Senate committees investigating the shooting offered lawmakers the opportunity to glean facts that can help guide proposals in the coming legislative session to improve school safety and prevent future massacres.

Sen. Royce West, D-Dallas, said he hoped his colleagues could remain open-minded about possible solutions. Soon, however, senators fell into familiar ideological camps. Sen. Bob Hall, R-Edgewood, deflected blame away from the military-style rifle the shooter used and said his ill intent was to blame. He said the shooter could have carried out the attack, and achieved a similar result, using a baseball bat.

Sen. Roland Gutierrez, the Democrat who represents Uvalde, pressed McCraw on whether Texans under 21 should be able to purchase a rifle like the one the shooter used. McCraw repeatedly dodged the question, saying only that some individuals, such as violent criminals, should not be able to obtain guns. The committee chair, Jacksonville Republican Robert Nichols, at one point interrupted Gutierrez to ask he soften his line of questioning so he sounded less like a lawyer taking a deposition.

Education Commissioner Mike Morath, another witness, offered new details about the shooter, Salvador Ramos Jr. The 18-year-old dropped out of Uvalde High School in the fall of 2021 and had once attended Robb Elementary. Morath said Ramos began missing school frequently in sixth grade and passed only a single course in his final year of enrollment. McCraw said police plan to interview Ramos’ grandmother, whom the teen shot in the face before stealing her truck and driving several blocks to the elementary school.

“Unfortunately, she can’t talk right now. It’s very difficult. She lost her jaw,” McCraw said. “But we’re arranging for an interview with her, and she’s been gracious to authorize that as long as her daughter’s there.”

Most of the hearing, however, focused on the flawed police response. Sen. Paul Bettencourt, R-Houston, questioned Arredondo’s competence.

“This incident commander finds every reason to do nothing,” he said.

He added, “this person should have never even been in the job. We have to have incident commanders that are ready for this.”

Bettencourt challenged Arredondo to answer questions about his decision making in public instead of testifying in the House behind closed doors, which he did Tuesday while the Senate met.

“Come to the Senate where the public of Texas can ask these questions,” Bettencourt said. “This is — it’s just abominable.”

Brian Lopez contributed to this report.