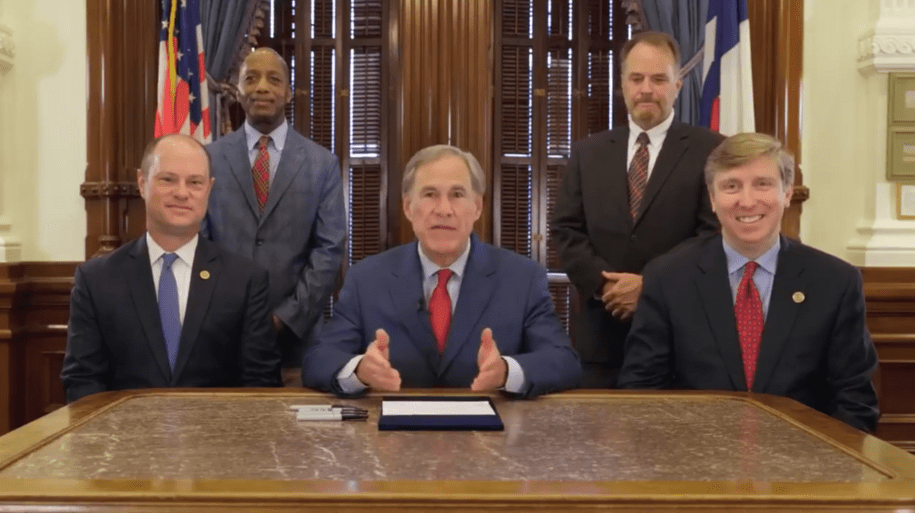 Here’s Abbott and a crew of sycophants selling Texas a slice of history devoid of context or … most of the history.

To keep Texas the best state in the nation, we can never forget WHY our state is so exceptional.

This move comes at the same time that Abbott and Republican legislators are moving to restrict discussions of critical race theory throughout schools. The above bill also requires that the 1836 Project promote “the Christian heritage of this state.” Unless that “Christian heritage” simply means talking about the Texas Christian community’s use of Paul’s Epistle to Philemon and other such bastardizations of the Old and New Testaments to support slavery, I doubt this has anything to do with teaching history.

Texas’ fight to become independent from Mexico heightened right around the time that Mexico banned the import of slaves into the territory. In fact, Mexico and Anglo-Texan landowners were at odds over slavery from the moment Mexico concluded its own war of independence in 1821. After various restrictions on the expansion of slavery in their Texas territory, Mexico banned slavery in 1829, with then-president of the Republic of Mexico, Vincente Guerrero, declaring all enslaved people emancipated. Anglo-Texan landowners worked on loopholes that allowed them to continue holding slaves and importing them into the territory for years.

Texians developed a scheme with which new settlers could evade Mexico’s ban on slavery. According to historical records, before leaving the United States and crossing into Mexican Texas, slave owners would meet with a notary public and draft a document in which slaves were given a specific value. The contract stipulated that though they would gain their freedom when they stepped on Texas soil, they would enter into a period of internment, in which they would work to pay off the debt of their value that they now owed to their previous master. Any costs for clothing or food or housing would be deducted from their “wages,” which were around $20 a year. Any sum not paid off by the time they died would be assumed by their children. Any of the former slaves’ children who were born after their parents passed into Texas would begin paying off their debts when they reached adulthood, presumably being considered property of the master until that point. Cheap labor from enslaved Black people was so central to the success of the early Texian colonies that settlers worked very hard to maintain it.

Texas gained its independence from Mexico in 1836. Texas subsequently applied for and became a state in our United States of America in 1845. At the time of the Texas Revolution in 1836 there were estimated to be around 5,000 slaves in Texas. By the time Texas was annexed into the United States there were an estimated 30,000 slaves in Texas, and by 1860 “the census found 182,566 slaves—over 30% of the total population of the state.” I guess that’s just a coincidence?

Let’s go to the other video tape! Texas’ ”Declaration of causes: February 2, 1861: This is the Lone Star State’s “declaration of the causes which impel the State of Texas to secede from the Federal Union.”* Here are some highlights [Note: The “she” spoken of in the Declaration is Texas]:

It turns out that Texas isn’t exceptional. At all. In fact, Texas’ history of slavery, slavery dependence, Christian hypocrisy, and white supremacy is pretty predictable and sadly pedestrian in comparison to the rest of the United States. One of the more unique aspects of Texas’ history is how little Texans and white supremacists like Abbott understand it. Texas was such a “shit-hole” Republic that thousands of Black slaves fled the state for Mexico in the two-plus decades of independence the Lone Star State had before the Civil War. The only thing “exceptional” about Texas is that it was so behind the times, it took until June 19, 1865 for Texans to realize they had had their asses handed to them in the American Civil War, and had lost.

Abbott has one aspect of Texas history and heritage correct: white supremacist attempts to drag human progress backwards, using racism, in the interests of big business power and profits. The problem with the snowflake crews across our country is that they are unwilling to face reality: While our country was founded with a sense of independence from authoritarian forms of government, much of it was built on the backs of African slaves. In fact, white Anglo-Saxon dominance in the wealth of our country was built on the backs of new immigrants from all over the world, with dehumanizing practices of murder and torture and rape visited most frequently upon people who weren’t white Americans. Our railroads and gold mines and cotton fields were all built, dug, and tilled by cheap labor in the service of a white supremacist system.

*Fun Fact: There are 21 mentions of slavery in the 24 paragraphs of this bit of history—and about 10 of those paragraphs are single sentences!