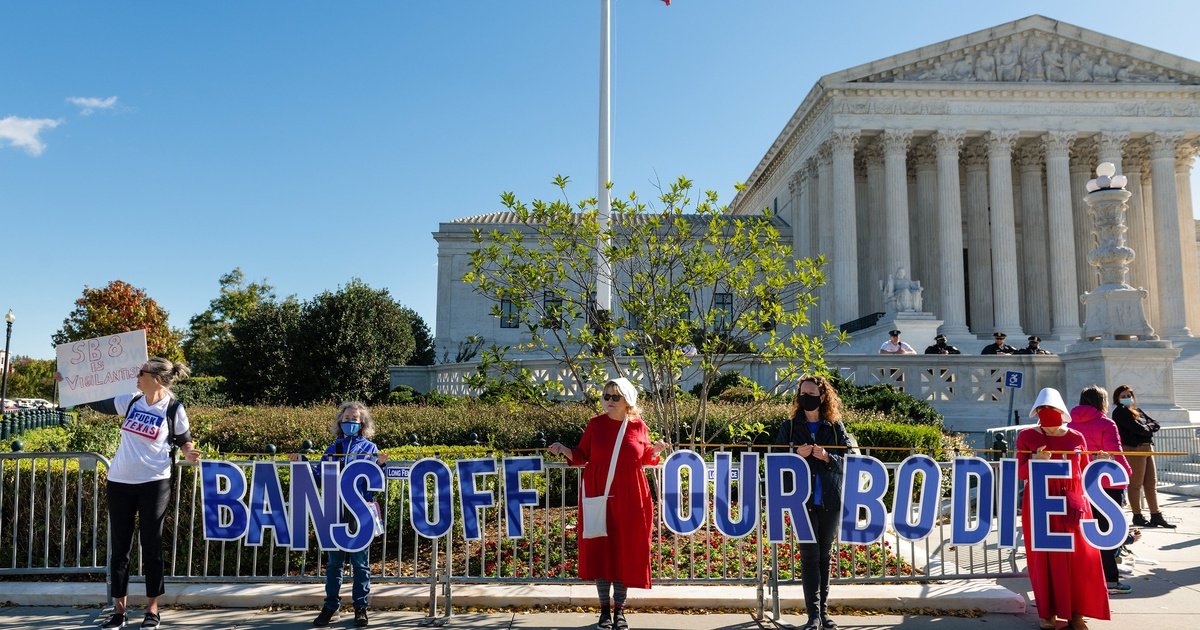 Texans who want to access abortion at any stage of pregnancy will soon have to travel over state lines, look beyond the U.S.-Mexico border or operate outside of the law, while others will carry unwanted pregnancies to term.

The U.S. Supreme Court on Friday overturned Roe v. Wade and will allow states to set their own laws regulating abortion access. Texas, along with 12 other states, has a trigger law that will automatically ban all abortions, with only narrow exceptions to save the life of the mother, 30 days after the Supreme Court issues its judgment, which typically comes a few weeks after the initial opinion.

More than half of all states, primarily in the South and Midwest, are expected to ban or severely restrict abortion access in the coming weeks and months, leaving most Texans hundreds, if not thousands, of miles from the nearest clinic.

Texas has already gotten a window into what’s to come; the state has been operating under one of the nation’s most restrictive abortion bans since Sept. 1.

Data gleaned from the early months under Texas’ existing abortion restrictions, as well as from countries that have banned abortion, show that many, though not all, pregnant patients seeking abortions will find ways to terminate their pregnancies.

“It has always been the case that people find ways to end pregnancies when they need to do so, and we’re so fortunate now that the methods are safer than they’ve ever been in human history,” said Farah Diaz-Tello, senior counsel with reproductive legal advocacy group If/When/How. “Abortion is, in many ways, too big to fail.”

But Diaz-Tello and other advocates warn that inequality of abortion access will only be exacerbated by these wholesale bans. And notably, some Texas lawmakers have signaled a desire to push legislation that would make it illegal for people to travel out of state to get the procedure.

Allowing each state to set its own laws is “cold comfort, of course, for the poor woman who cannot get the money to fly to a distant State for a procedure,” they wrote. “Above all others, women lacking financial resources will suffer from today’s decision.”

The new patchwork of laws

All of Texas’ neighboring states — except New Mexico — are expected to ban abortion to varying degrees.

Oklahoma is already operating under the strictest abortion law in the country, which bans all abortion using the same civil lawsuit enforcement mechanism that Texas debuted in September, empowering civilians to sue clinics and people who “aid and abet” prohibited abortions. That state also has a trigger ban that means abortion will be outlawed, with exceptions to save the life of the mother, going forward.

Louisiana and Arkansas also have trigger laws that will ban abortion, with exceptions to save the life of the mother, almost immediately now that Roe v. Wade is overturned.

New Mexico is expected to become a “haven state,” where abortion remains legal and largely accessible. That state currently has six abortion clinics and is gearing up for an influx of patients. Jackson Women’s Health Organization, the Mississippi abortion clinic at the center of the Supreme Court case, has said it’s considering relocating to New Mexico.

But even the closest New Mexico clinic is a 10-hour drive from Dallas and 12 hours from Houston — Texas’ two largest population centers.

Abortion will also remain legal in Colorado and Kansas, although Kansans will vote in August on a constitutional amendment to overturn abortion protections. If the amendment passes, the Kansas Legislature is expected to swiftly enact strict abortion restrictions, including possibly banning the procedure altogether.

The other states that are expected to fully preserve abortion access are much farther away from Texas — along the Wet Coast or clustered in the Northeast. Most of Texas’ population centers will be hundreds of miles, if not farther, from the nearest abortion clinic.

Abortion advocates are creating networks and strengthening existing ones to help people travel to states that allow abortion. But that’s not an option for everyone. Neesha Davé, deputy director at Lilith Fund, an Austin-based abortion fund, said the impact of these abortion laws will not be felt equally by all.

“Folks who have resources, folks who are wealthy, will always be able to access the care they need, even if they have to navigate countless barriers to be able to do so,” Davé told The Texas Tribune in May. “But it is lower-income folks, people of color, the folks that we are serving on our hotline who are disproportionately impacted by abortion bans.”

It’s not just about the cost of a plane ticket or hotel, Davé said. Many of their clients cannot afford or find child care or don’t get paid time off of work or aren’t able to safely share their plans with family. And some people can’t leave the state, including undocumented immigrants and teenagers, especially those in foster care.

People who cannot travel out of state may find ways to access abortion-inducing medication outside of the law, either by ordering it online or obtaining it through advocacy networks.

Even before the Supreme Court ruling, it was illegal for anyone other than a doctor to distribute these medications or to provide them through the mail. Existing Texas law and the trigger ban specifically exempt the person undergoing the abortion from prosecution.

A medication abortion, approved by the Federal Drug Administration for use through the first 10 weeks of pregnancy, is a two-drug regimen of mifepristone and misoprostol. Taken as prescribed, medication abortion is extremely effective and overwhelmingly safe, and makes up a majority of abortions in Texas.

But in recent years, as abortion access has narrowed in Texas and around the country, more people are seeking to access these medications through other means. Some people order from online pharmacies that operate overseas, beyond the reach of U.S. law, or have someone mail them the medication from another state, in violation of state law.

AidAccess, an international nonprofit, provides Texans with the medication through the mail, despite state laws that prohibit them from doing so. While the federal government has made efforts to crack down on AidAccess, they continue to operate openly.

Demand for abortion-inducing medication surges in the wake of increased restrictions, according to University of Texas researcher Abigail Aiken. After Texas passed its law banning abortions after about six weeks of pregnancy, Aiken found that requests to AidAccess increased by more than 1000%.

“And of course, this time, it will not just be Texas,” Aiken said. “When we have these geographical blocks of the country that are basically abortion ban zones, that’s going to increase the need for self-management.”

The medication must be used early in pregnancy, and a patient must have a location where they can safely undergo the abortion, which many experience as being similar to a very heavy menstrual period, depending on their stage of pregnancy. It also, inherently, requires operating outside the legal and health care system, which may make some patients uncomfortable, Aiken said.

“We know that really severe complications are very rare, but at the same time, someone might worry a lot about what happens if they do need to go to a hospital or want a follow-up,” Aiken said. “They may feel unable to do that, because of fear of surveillance.”

Cracking down on the mailing of abortion-inducing medication is expected to be a future area of focus for Republican legislators in Texas. Even with exemptions for the pregnant patient, Diaz-Tello warns that some pregnant people will inevitably get caught up in the dragnet of investigations and prosecutions.

“We know that prosecutors are going to try to criminally punish people, irrespective of what the law says,” she said. “So for us to be able to resist that, it’s important to note that it is unlawful criminalization.”

Texas saw this firsthand in April when a prosecutor in Starr County charged a woman with murder after she self-managed an abortion. Texas’ murder statute specifically exempts abortion; the charges were later dropped after an international outcry.

Traveling south of the border

As abortion access narrows in the United States, some pregnant patients may look south of the border for care. In Texas, that’s already happening.

Residents living in the Rio Grande Valley have long turned to pharmacies over the border to access a variety of medications, including abortion-inducing drugs. There is little available data on how many pregnant patients seek to self-manage their abortions this way, but advocates working near the border expect to see that become more common going forward.

Clinic-based care in Mexico is also becoming a more feasible option in the wake of a 2021 Mexican Supreme Court decision decriminalizing abortion nationwide. Legalization still varies from state to state, even after the ruling, but it was seen as a major victory for abortion advocates in the world’s second-largest Catholic country.

State Rep. Erin Zwiener, D-Driftwood, visited Mexico recently as part of a delegation of state lawmakers to learn about the impact of that ruling. While abortion advocates in Mexico have long looked to the United States as a “beacon” of hope, she said, “now Mexico is leading.”

“Seeing the care and the compassion that people I serve are being treated with across our borders was incredibly touching,” Zwiener said. “I’m so grateful to those offering Texans that lifeline right now.”