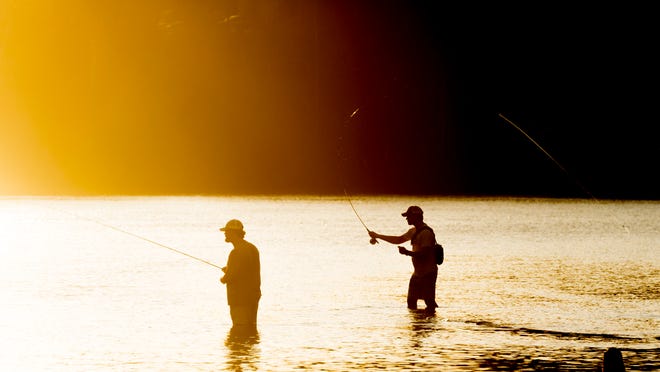 When Brad Collett assigned his landscape architecture students a project to reimagine the Tennessee River Valley, he had no idea that one would propose an idea that could change the region’s relationship with one of its essential natural resources.

Nearly six years later, what started as a 2016 class project has evolved into a dynamic vision for a trail system that could pump upwards of $104 million into Tennessee and surrounding state economies.

The goal: turn the Tennessee River, and the public land connected to it, into North America’s next great trail system.

Tennessee RiverLine, an emerging trail system following 652 miles of the Tennessee River, is reframing the natural resource as a tourism hub and reconnecting communities to the water in their backyard.

Snail darters are no longer endangered: The tiny fish is a true part of Tennessee history

“That student recognized that in order to build a community of care around the Tennessee River, we needed to show people what it was and how valuable it is and that it is something there for us to embrace and to experience,” Collett, the Tennessee RiverLine director and UT associate professor, told Knox News.

What is Tennessee RiverLine?

The initiative, led by a collaborative team at UT and the Tennessee Valley Authority, could stimulate new economic opportunities by providing paddling fleets to communities and helping them get people out on and near the water.

Investments from the UT Institute of Agriculture, the UT Extension, UT Knoxville, the TVA, and grants from federal, state, and local partners could bring an estimated more than 808,000 new paddlers to states that touch the river, according to researchers at the University of Tennessee at Knoxville and the University of Alabama.

Right now, only about 284,550 paddlers across Alabama, Kentucky, Mississippi, and Tennessee visit the Tennessee River annually.

More paddlers exploring the river means more people visiting and spending money in nearby communities. The RiverLine could lead to 2,000 new jobs and $104 million into the four states’ economies, UT and Alabama researchers said.

This breaks down to:

Tennessee River could be one big park

Instead of viewing the river as its own entity, Collett wants to think about the natural resource, the land that surrounds it, and the communities that support it, as one big 1.2 million-acre river park.

Unlike greenways or trails that have to work with or go around private land, nobody owns the river, and it can be used as a way to travel freely through the region.

“Our waterways provide a great deal of connectivity in our communities that, if we can re-conceptualize them as part of that open space system, then we have a really great level of connectivity,” Collett said.

To help with that connectivity, communities along the river can apply for the Tennessee RiverTown program. The program helps cities and counties reframe their relationship to the river, build awareness of what the river has to offer, and connect their community to others along the RiverLine.

‘History is complicated as hell’:Cherokee will ask to restore native name for Clingmans Dome

One of the barriers to water recreation is the cost to consumers and towns. Gear such as canoes, kayaks, and paddleboards can be expensive. But the RiverTown program provides paddling fleets to communities to help them organize recreation events and get people out on the water.

“That’s important on a couple levels. One, it shows communities that, ‘Hey, this is a resource that’s accessible to us,'” Collett said. “But also it raises awareness of the RiverLine vision overall and helps build a constituency around the river through through that programming.”

Which cities are participating in Tennessee River project?

So far, more than 20 communities have signed up for the RiverTowns program. Knoxville is one of those communities.

There’s still more to be done to make sure the 2.4 million people connected to the Tennessee River can utilize everything it has to offer, including the estimated $24 million in annual health-related cost savings thanks to exercising by paddling along the river.

“The pandemic taught us how important landscape is to our physical health, our mental health, our spiritual health, right?” Collett said. “What if that river was unlocked as a part of our public space system? How great would that be? How much more benefit would that provide?”

Current RiverTowns on the Tennessee RiverLine

Becca Wright (she/her) covers the University of Tennessee and statewide higher education for Knox News. She can be reached at becca.wright@knoxnews.com or 865-466-3731. You can follow her on Twitter @beccamariewrong. Our newsroom is dedicated to the public good, and you can support that by subscribing at knoxnews.com/subscribe.