Tennessee in Training – The Tennessee Magazine 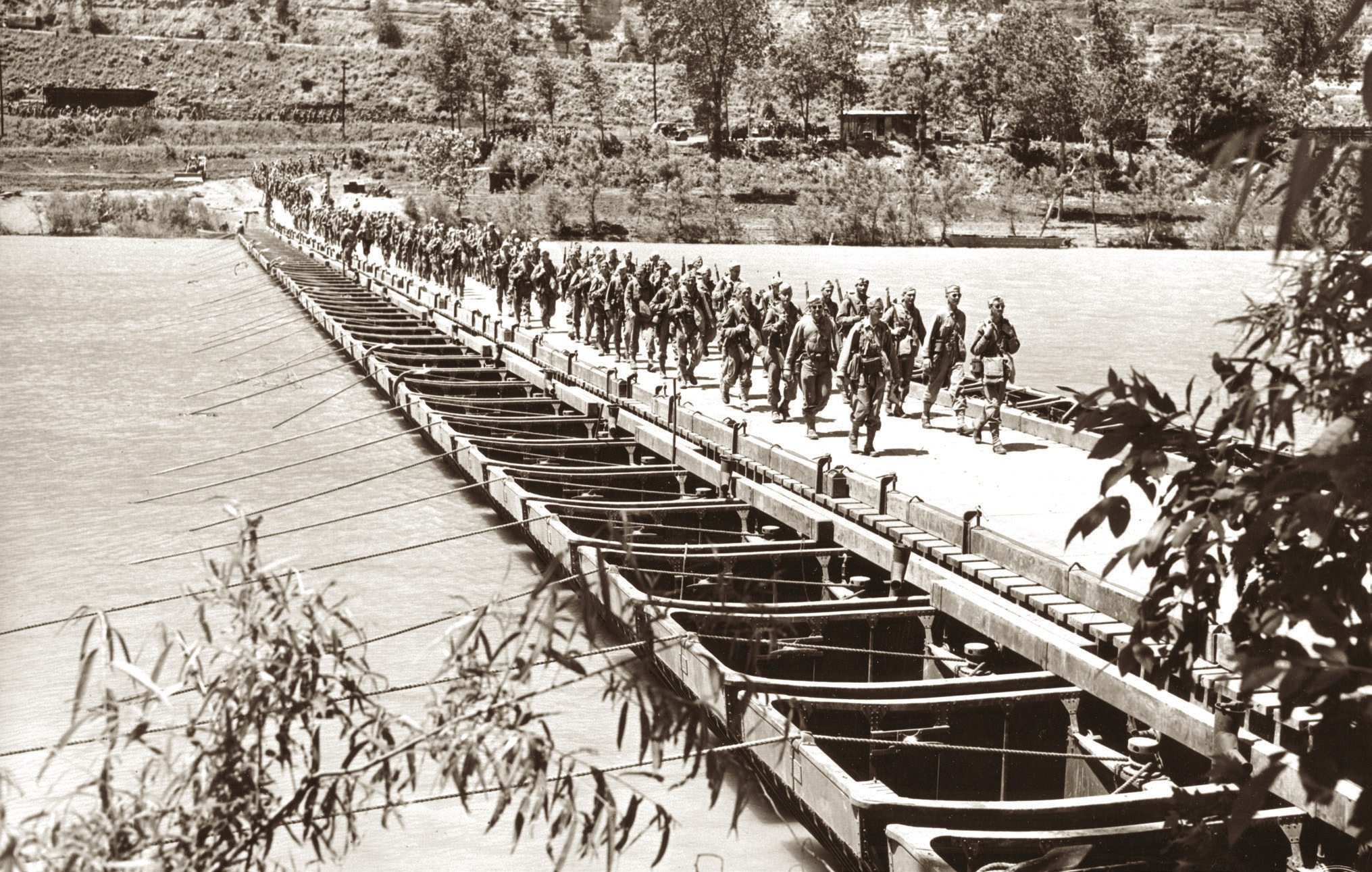 I’m happy to say that Americans aren’t used to seeing soldiers, tanks and warplanes unless they happen to live near a military base. But during World War II, the U.S. Army used Middle Tennessee for maneuvers; more than 850,000 soldiers trained in the state. During these military exercises, it wasn’t unusual for a farmer to see tanks driving through his cow fields or for children to encounter soldiers marching down the road.

Today the very idea that the U.S. military would use private property for military maneuvers is so alien to us that I’ve put together a series of obvious questions and their answers:

Why were so many of the maneuvers staged in Tennessee?

The terrain in Middle Tennessee is similar to that of France, Belgium and Germany, which is where the U.S. government anticipated that the war would be fought. Also, Tennessee Gov. Prentice Cooper and U.S. Sen. Kenneth McKellar reportedly urged the Army to stage maneuvers in Tennessee.

What types of soldiers and weaponry were involved?

Foot soldiers (infantry), soldiers who jump out of airplanes (airborne), tanks and aircraft were all involved. Fighting forces were divided into two opposing sides: red and blue. Neither side used live ammunition; Army officers wandered through the maneuver area and acted as umpires, determining which soldiers, tanks and units had been “killed” and which had prevailed.

In what counties were the maneuvers staged?

Were the maneuvers continuous?

No. There were seven separate events that took place in Tennessee between 1941 and 1944. Most would last about two months, and the Army would announce them in advance.

How did the U.S. Army deal with private property laws?

The U.S. Army sent letters to every farmer in the counties where soldiers intended to operate, asking property owners to agree to allow soldiers to trespass and promising farmers in advance to reimburse them for any damages. “Our army can’t be ready unless we have practice,” the letter said. “Such practice may be annoying to you as a property owner, but we hope you will make a sacrifice in order to make your army efficient.” Property owners agreed to allow soldiers to “enter, maneuver upon, pass over and bivouac or camp” and “use the water therein or thereon for drinking, cooking and cleaning purposes.”

I don’t know what happened if farmers refused to sign the agreement with the Army. In fact, I can’t find a single article that mentions that ever happening.

Did the maneuvers affect day-to-day life in Tennessee?

Absolutely. The war maneuvers made parts of the state impassable, wore out a lot of old roads and bridges, clogged up mail delivery, and ran hotels out of rooms and restaurants out of food. It even disrupted hunting season, which was called off or delayed in war maneuver areas!

I’m sure a lot of people complained about the inconvenience. But newspapers were far more likely to quote people who didn’t mind. “Why, mister, they (the U.S. Army) can tear this place up if they want to,” one Wilson County woman told a reporter. “I got four boys in the Army, and they’re learning how to keep alive by tearing somebody else’s place up.”

Did the maneuvers affect towns or just the countryside?

Both. A vivid example took place on June 12, 1941, when the Army simulated a bombing raid on Shelbyville. Residents were ordered to execute a complete “blackout” in advance of the event, and most residents stood out in the streets and watched the planes fly overhead.

Oh, yes. Countless fences, driveways and crops were damaged, and a U.S. Army department known as the Board of Rents and Claims wrote more than 20,000 reimbursement checks. By the end of the war, the Army had installed more than 5 million feet of wire fencing in Tennessee and repaired more than 1,000 bridges damaged by its tanks and trucks. Even with all this work, however, many of Middle Tennessee’s roads and bridges were in a sorry state by war’s end.

The most famous instance of damage occurred when a tank from George Patton’s 2nd Armored Division accidentally drove through Bell Buckle’s city hall. “The damn city hall was not on the map!” Patton reportedly joked.

What are some of the personal stories that came out of the maneuvers?

At a time before television, many people in Tennessee thought the maneuvers were the most exciting thing they had ever experienced. The most interesting event of the day was when soldiers marched past, a warplane flew overhead or a tank rolled by. “When those steel monsters clattered through the streets of the small towns here, all of the townspeople turn out to line the sidewalks and look at one of Uncle Sam’s most potent fighting machines,” the Chattanooga Daily Times reported on June 30, 1941.

John Hood, a former state representative from Murfreesboro, says he remembers the maneuvers very well. “I had a friend whose father owned a grocery store, and we would buy food from the store and sell it to the soldiers and make a little money in the process,” he said. “Sometimes we’d trade food for insignia.”

Hood says his family would hear gunfire at night and look out a window to see soldiers firing weapons (with blanks) in their front yards. “It sort of frightened us, but it was very exciting,” he says.

Were the maneuvers dangerous?

More so than you would think. More than 250 soldiers died while stationed in Tennessee during maneuvers, most of them in truck and jeep accidents, plane crashes and failed river crossings.

Two tragedies stick out. On June 6, 1943, 19 soldiers died when a U.S. Army truck crashed through a wooden guardrail and fell 30 feet into a train track in the Woodbine section of Nashville — in what may be the deadliest traffic accident in Tennessee history. Nine months later, a raft crossing the Cumberland River near Hartsville capsized, killing 21 soldiers.

Did reporters travel along with the maneuvering Army?

Yes. During active maneuvers, two or three times a week, reporters from various newspapers published stories starting off with the vague identifier “WITH THE SECOND ARMY ON TENNESSEE MANEUVERS.”

One of these reporters was a woman — Marion Coleman of the Chattanooga Times and later Associated Press. One of Coleman’s descendants later donated her papers to the Walker Library at Middle Tennessee State University.

Did the soldiers get to take time off while in Tennessee?

Yes, which is why churches, schools, YMCAs and even some private homes were converted to USOs and other social venues for soldiers. The most popular weekend destination was Nashville — which, according to Woody McMillin’s book “In the Presence of Soldiers,” had no fewer than 22 specially arranged places where servicemen could relax, take showers and sleep. This sudden addition of tens of thousands of servicemen brought with it the expected mischief; Middle Tennessee law enforcement officers had to deal with far more crime than normal during the maneuvers.

Did the soldiers make permanent connections to Tennessee?

Some did. Researchers have uncovered stories of many former soldiers who moved to Tennessee after the war because they liked what they saw of the place during the war. Also, many Tennessee women met and married soldiers while the men were stationed in Tennessee during the war. “I would have no way of estimating how many marriages came out of the maneuvers,” says Smith County researcher Tressa Bush. “I think it’s safe to say that the number was in the hundreds.”