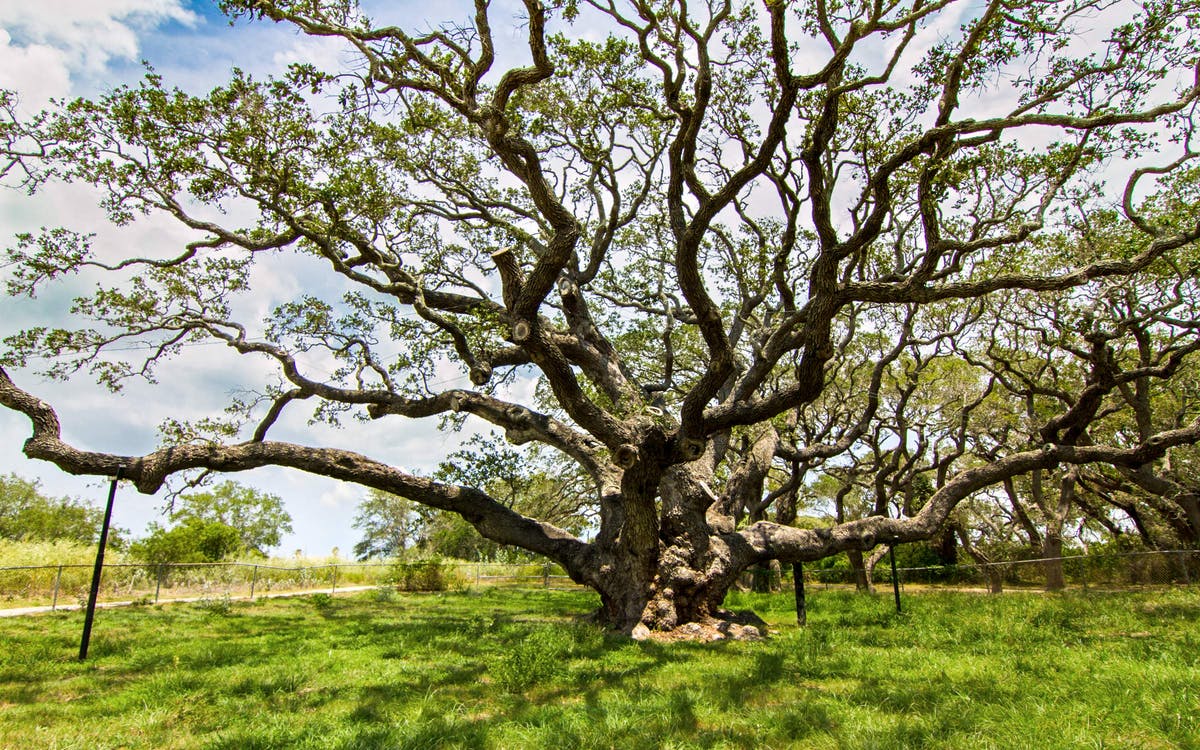 There are countless trees in Texas, vastly outnumbering the thousands of Californians who have flooded the state in the past few years. But unlike our new neighbors, trees serve a purpose—many, in fact. They clean our air, provide much-needed shade, house animals, dampen road noise, and beautify our neighborhoods. It is easy to overlook the trees that surround us every day, but it can’t hurt to take a moment and appreciate the simple beauty of our leafy friends, whether they are in your backyard, in some far-flung state park, or even on the side of a highway. There are as many as 281 native tree species in Texas, from the universally beloved southern live oak to the unfairly maligned ashe juniper (a.k.a. mountain cedar). Our trees range widely in appearance and ecology: consider the Rio Grande Valley’s exuberantly coiffed sabal palms; East Texas’s slender, elegant shortleaf pines; and the stubborn mesquite clinging to the walls of Caprock Canyons.

I began pondering the trees of Texas earlier this month, when I posted on Twitter about a tree I enjoy looking at from my office window in downtown Austin, a small live oak perched incongruously atop the Bowie luxury high-rise apartment building. From there I began thinking about trees I come across daily on my commute, trees our family passes on our monthly drives to visit relatives in Brownsville, and trees I saw in 2020 on my big bicycle trip around the perimeter of Texas. I even bought a book on Texas trees to hone my identification skills and started scouring the Texas Big Tree Registry from the Texas A&M Forest Service for nearby state and national champions to admire. I’d gone tree-crazy.

Below are ten of my current favorite trees in the state. Some I’ve personally enjoyed; others are on my short list to visit in the future. On this Earth Day, take a minute to think about the trees in your life. Hang a hammock between two trees in your yard, or set up a picnic in the shade of your local park’s trees. Maybe even find a tree to hug. We need them, and they need us.

It’s likely that when you think of Texas pines, you immediately imagine the thick pine curtain of East Texas. And you probably picture such iconic species as the longleaf or the loblolly, rather than a quirky Aleppo pine like this fine specimen in El Paso. Also called the Jerusalem pine, it’s originally from the Mediterranean and seems well suited to the Sun City’s desert climate. This is one tree I’ve never actually seen in real life, but just the Google Street View of it has me wanting to grab the family and jump in the car. Located at the bus stop where Magoffin and San Antonio Avenues meet, it offers an inviting patch of shade downtown. At 76 feet tall, it’s a state champion, and the urban forester who cares for it, Oscar Mestas, was named Texas’s 2015 Arborist of the Year.

A half-hour drive northwest of Dallas, in the town of Bartonville, a 150-year-old pecan tree comes to life each winter after it loses its leaves. Since 2007, on Barbara Nunneley’s ranch, the tree has been adorned with 60,000 lights from Thanksgiving to New Year’s Day. Nunneley first lit the tree as a surprise to cheer up her father, who was struggling with prostate cancer. He died the next day, but the family decided to carry on the tree lighting as a tradition in his memory. “My daddy did not ever see it from Earth, but I’m real sure he saw it,” Nunneley told Texas Monthly’s Mary Beth Gahan. Sure, you could go by and see the tree any time of year, but wait until next winter if you want the full show.

One of the largest live oaks in the nation, the accurately named Big Tree has spread its massive roots outside Rockport for at least a thousand years (some estimates put it closer to two thousand). In fact, it’s not just one of Texas’s oldest trees, it’s one of the state’s oldest living organisms. As Dan Oko wrote for Texas Monthly, “This gargantuan live oak was already more than five hundred years old when Cabeza de Vaca arrived on Texas shores.” Hurricane Harvey didn’t seem to faze it, nor did at least forty other major storms, along with assorted fires and droughts. Its trunk measures more than 35 feet around, and it’s 44 feet tall, so you’ll feel like an ant when you stand beneath it.

Not to be confused with the active-adult community in San Marcos of the same name, the Kissing Tree in Klein (technically Spring) looms large on its small patch of land behind a Circle K. The majestic live oak, dripping in Spanish moss, is reminiscent of the southern live oaks I grew up with in Central Florida. In 2017 developers nearly chopped down the tree, but it was saved after a heroic community effort spurred on by the students of Klein Oaks High School. Three years later, it was designated a Famous Tree of Texas by the Texas A&M Forest Service.

Close to the banks of Lake Marvin, not far outside Canadian, this perhaps-two-hundred-year-old cottonwood (and a state historical marker honoring it) still stands as a landmark from the Panhandle’s wild past. Native Americans, buffalo hunters, and stagecoach drivers are said to have used this tree as a waypoint during their travels here in the late nineteenth century. If I’d known about this tree when I was riding through Canadian in 2020, I could also have rested under its branches on my journey. It would have made for a much more adventurous and scenic ride than along U.S. 60.

Did you think I was going to get through this list without a brewery mention? I’m TM’s resident beer expert, after all. Sipping beer under a tree is an activity that’s been around since the invention of beer. Live Oak’s old-world-style beers are practically brewed to be enjoyed in the shade. Unsurprisingly, their brewery’s beer garden, in far East Austin, just across from the airport, is chock-full of hearty live oaks (duh), casting a wide canopy for drinkers, kids, and dogs. Even on the hottest summer days, these oaks do the work to keep us cool. Well, cool enough to enjoy one or two pilsners.

Pilgrims flock by the hundreds to Estella P. Garcia’s yard, ninety minutes east of Laredo, in the belief that this twenty-year-old tree (believed to be a eucalyptus) might ease their burdens. “Like a Rorschach test, Garcia’s tree appears differently to every visitor, shifting to accommodate each individual’s prayers,” wrote Texas Monthly’s Cat Cardenas. “One lost soul might take comfort in finding the Virgin Mary’s face hidden in the tree’s bark; another visitor might feel physical relief when she holds her injured limb against its smooth, cool trunk.”

On a shadeless stretch of Texas Highway 35, there is a rest stop twelve miles south of Tivoli. When I was passing through here on my bike ride around Texas in September 2020, it was quite hot, and I was dying for a bit of rest. The rest stop’s two picnic shelters were both rusted relics, with roofs that had long since rotted away. The only patch of shade was a young live oak, which may have saved me that day. I was able to sit a spell and rehydrate before climbing back into the saddle to battle the heat all the way to Port Lavaca.

Named after onetime mayor of Brownsville, photographer, and botanist Robert Runyon, the Runyon’s Esenbeckia is an extremely rare tree that grows only in the Lower Rio Grande Valley and Mexico. It was discovered in 1929 along the banks of a resaca. There are just a few places in the Valley where you can spot the tree, including at Runyon’s former home, where one has been growing for more than ninety years. But your best bet at catching a glimpse is by visiting the Gladys Porter Zoo. Plus, you can watch orangutans and snack on nachos at the same time.

Somewhere between Armstrong and Raymondville, near the line dividing Kenedy and Willacy Counties, there used to be an iconic group of more than three hundred palm trees in the median of U.S. 77. They were an arboreal “Welcome to the Rio Grande Valley” sign, indicating that your journey to the Valley was nearing its end. Texans were up in arms in 2019 after the Department of Transportation removed and relocated many of these trees to make room for a highway expansion. More than 55,000 people signed a petition calling for their preservation. Thankfully, TxDOT listened, and the agency has since replanted a new grove of palms to serve the same purpose. If my kids happen to peel their eyes away from their screens as we’re passing through this section, they will inevitably exclaim “Palm trees—we’re almost there!”