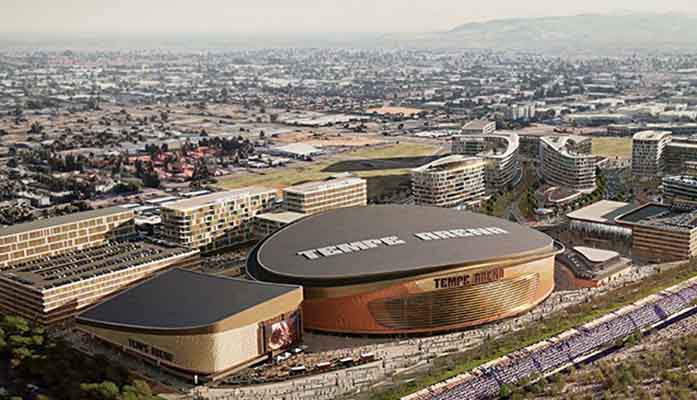 TEMPE – More than a month has passed since the Arizona Coyotes ended their season. While some NHL teams are still chasing the 2022 Stanley Cup, team management is focused on finding a new, permanent home for the franchise.

At 10:08 p.m. Thursday night, the Tempe City Council voted 5-2 in favor of beginning the formal negotiation process with the Coyotes on their proposal for a $1.7 billion sports and entertainment district. This is the first step for Arizona’s NHL franchise to secure a permanent home in the Valley.

“We still have a long way to go and will acknowledge that,” Coyotes President and CEO Xavier Gutierrez said. “But tonight is a night to celebrate. This is something that we know is a great vision, and a great opportunity to really be the home all these fans and our fans in waiting have deserved.”

Gutierrez was joined by attorney Nicholas Wood in presenting the project during the hearing that began at 2 p.m. The proposal is highlighted by a 16,000-seat arena that would be home to the franchise. It also includes a 3,000-seat music venue, spaces for upscale retail and room for over 1,600 residential units.

“It doesn’t hurt to have conversations with people to see if there’s some way you can get to a deal,” Tempe Mayor Corey Woods said after the decision. “What’s the worst that could happen? You spent a couple of months talking, eventually just to say, ‘We can’t get there.’ If that’s the worst thing that happens, all you’ve really lost is time. There’s no other pitfall, so why wouldn’t we want to go forward and engage in those conversations?”

The afternoon began with a flood of people who represented both sides of this project. During the bulk of the day, members of the public were able to share their thoughts (in-person or on Zoom) within a three-minute time frame. By the end of the night, less than 100 people remained, with most wearing some form of Coyotes apparel.

Multiple current and former players were on hand to both witness and play a role in the hearing. Current forward Clayton Keller, who was joined by teammates Nick Schmaltz and Christian Fischer, gave a statement during the hearing:

“Speaking to other players around the league when they come here, they speak wonders about the restaurants, the way of life, the golf and everything to do in this city. I think Arizona is important to the NHL and we want to stay here so I hope you guys vote yes to start negotiations for this project.” 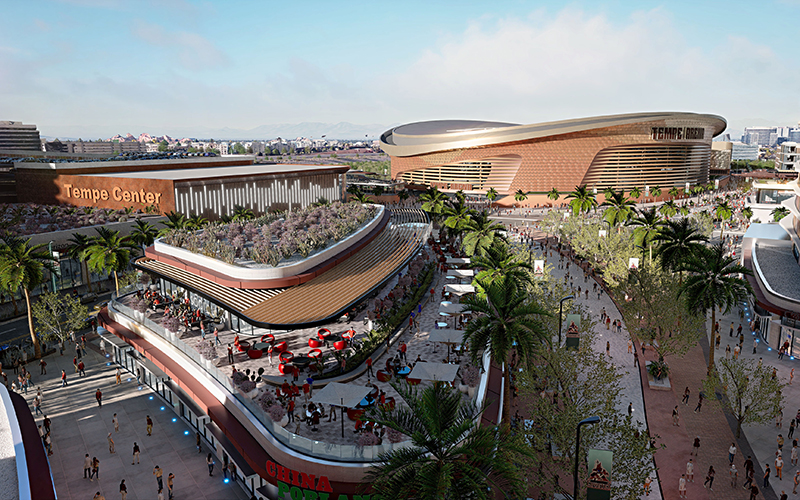 The proposed plan not only includes a hockey arena but an entertainment district including fine dining, shopping and a public ice rink. (Rendering courtesy of Arizona Coyotes)

How did they get here?

In July of 2021, the City of Tempe issued a request for proposals for “a project incorporating a professional sports franchise and entertainment district for two parcels of city-owned land totaling 46 acres at the northeast corner of Priest Drive and Rio Salado Parkway.”

Only one submission was received by the city: the Arizona Coyotes.

The Coyotes started the search for a new home after the city of Glendale announced in August 2021 that it would not renew the operating agreement for the team to use Gila River Arena.

The arena was constructed and has been the home of the hockey franchise since 2003. In a Twitter thread, the City of Glendale said the parting of ways was for an “increased focus on larger, more impactful events and uses of the city-owned arena.”

Tensions were rising. In December of 2021, the city threatened to lockout the team after its failure to pay $1.3 million in state and city taxes. A statement released by the team stated the unpaid bills were due to “human error.”

The background of the team that was pulled into bankruptcy court in 2009 had some councilmembers questioning its history. Councilmembers Lauren Kuby and Doreen Garlid were the two opposing votes. In Kuby’s comments during the hearing she stated, “This is about more than hockey.”

Kuby also mentioned concerns about two possible sportsbooks that were part of the proposal, noting that sports gambling targets both the poor and college students, which Tempe has many of, she said.

Since the Winnipeg Jets became the Phoenix Coyotes in 1996 (and then the Arizona Coyotes in 2014), there will now be three (with four potentially on the way) different buildings which the Coyotes have called “home.”

Upon their arrival in the Valley, the Coyotes played in the now-Footprint Center in downtown Phoenix, where they split the arena with the Suns. Then, they moved to Gila River Arena in 2003.

For the next three years, Arizona State and the Coyotes will share the new multipurpose arena that is expected to be finished in the fall of 2022. The new arena will also be the home of ASU gymnastics and wrestling.

Arizona State’s newest venue will have a capacity of 5,100, which is significantly less than the 18,300 seats in Gila River Arena. The agreement between the university and the Coyotes has a “good behavior” clause in addition to a majority of restrictions when it comes to the Coyotes’ ability to market inside the arena.

The deal between ASU and the Coyotes can be extended for another year (2025-26) if completion of the new potential project is delayed.

This is just a small step in the entire process, but a very important one at that. Negotiations can take as much time as needed, but now both the city and the franchise can engage in those talks.

“Clearly, we’re a long ways away at this point,” Woods said. “There’s a lot of work that has to be done … but at the same time, I’m always very happy when something like this actually takes place where you’re working with a professional sports franchise and talking about bringing an entertainment district to your area. So quite honestly, I’m excited about seeing where those conversations go and if we can actually arrive at a deal.”

For more information on the proposed project, visit: https://www.coyotesintempe.com