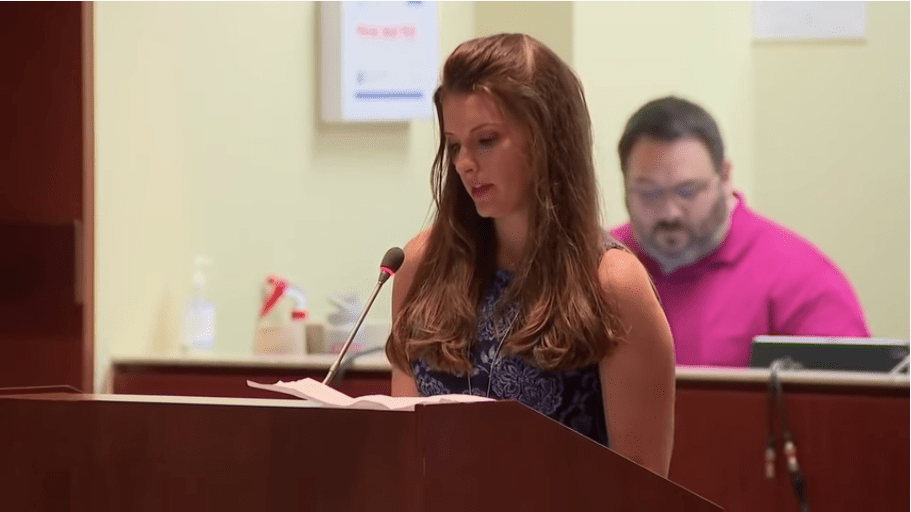 “School board, I quit,” elementary school teacher Laura Morris announced, adding that she quit the school’s policies, trainings, and “quit being a cog in a machine that tells me to push highly politicized agendas on our most vulnerable constituents … The children.” Morris was speaking in reference to a trans-inclusive policy recently adopted by the Loudoun County School Board in Loudoun County, Virginia, that is in accordance with the state’s new guidance for the department of education to develop policies for model language for trans students.

“I was told, in one of my so-called equity trainings, that white, Christian, able-bodied females currently have the power in our school and that, quote, ‘This has to change,’” Morris, who says she has been an educator for 10 years, five of which were in the Loudoun district, said at the Aug. 10 meeting. She said she “struggled” with the decision to return to work at a district that offered a “flashy” salary but “promotes political ideologies that do not square with who I am as a believer and Christian.”

“You’ve made your point,” she continued. “You no longer value me, or many other teachers you’ve employed in this county. So since my contract outlines the power that you have over my employment in Loudon County Public Schools, I thought it necessary to resign in front of you.” She then encouraged all parents to “flood” private schools and noted she will find work elsewhere.

You can watch a clip of her resignation here.

A woman who says she’s a Loudoun County teacher just broke into tears addressing the school board saying she would not honor the transgender pronoun policy because of her faith and she told the board she was quitting her job, right there on the spot. @nbcwashington pic.twitter.com/GTPa2C0Twz

If you’re wondering just what the trans-inclusive policy includes, here are some highlights:

In short: all good, reasonable, simple changes that are no significant effort on the part of the school or staff, but can be legitimately lifechanging for students.

The new guideline also states in part: “Staff or students who intentionally and persistently refuse to respect a student’s gender identity by using the wrong name and gender pronoun are in violation of this policy.” Mental health professionals at schools will also have to complete additional LGBTQ+ competency training that focuses on topics like preventing bullying and discrimination.

Emily Hart, a substitute teacher, also said the policy would “force” teachers to act against their religious beliefs, according to local outlet NBC 4 Washington.

Luckily, not everyone who showed up at the meeting was spewing transphobia.

Cris Candae Tuck, another parent with children in the school, said the policy will allow trans kids to feel “accepted” and “affirmed.” Tucker added that students “can just be an average normal student without all of this hanging over their head.”

If the chaos of this county sounds vaguely familiar, it’s perhaps because elementary school physical education teacher Tanner Cross rallied against trans-inclusive policies back in May. Cross was suspended, which resulted in him suing, and he has since been reinstated. You also might recall that Step Up Virginia, a staunchly conservative group, has gone to a number of school board meetings to fight against trans rights.

Given that the nation is still facing a global pandemic, families are worried about getting food on the table and making rent, and hospitals are reaching capacities, one would think people would be mobilizing to help one another, but when it comes to transphobia, people really know no limits.