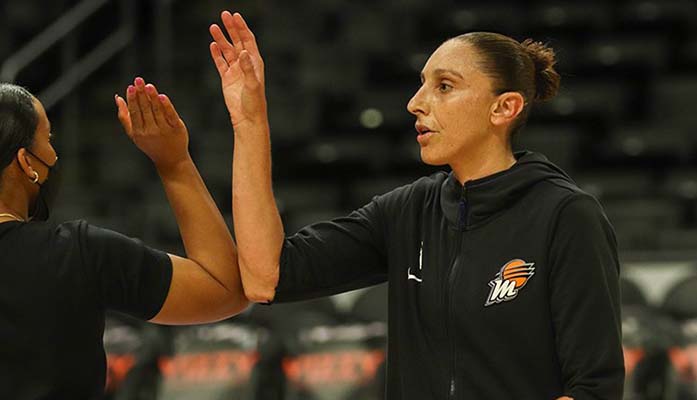 PHOENIX – Imagine this: A West Coast professional basketball team plays a home game Wednesday night, and then arrives at the airport the next morning, weary and exhausted, for a flight to the East Coast for a Friday game.

At the airport, the team learns its Southwest flight has been delayed. After eight hours, the flight is canceled. Players and coaches scramble for overnight options, and once they arrive in the connecting city, they are forced to take different flights, cramming their long frames into cramped seats. Twenty-five hours later, everyone arrives at their destination, just several hours before tip.

Welcome to the WNBA.

This is a true story that happened to the Las Vegas Aces in 2018. The team was forced to cancel its game against the Washington Mystics and missed a playoff berth that season by one game. It could have been avoided had the team and coaching staff traveled by charter from Las Vegas to Washington D.C.

Recent travel challenges and COVID-19 protocols have renewed the debate about WNBA travel. WNBA players have long asked to have their flights upgraded from commercial to charter, primarily because many players are tall and need more legroom. Plus, each team has a strict regular season schedule that must be followed over the summer months. WNBA revenue is lost when extreme situations like the Aces faced arises.

“It’s unfortunate that we have to travel this way because it really does take a toll on you physically, and now your health is at risk for you and your family,” Phoenix Mercury guard Diana Taurasi said. “It’s a shame that we are still talking about this 25 years later when there’s big pockets out there that could change this thing, but you know, we’re just women.”

NBA players fly on charters and 28 of the league’s 30 teams have an agreement with Delta, which provides special 757 aircrafts and features 54 leather business-class seats and plenty of space. The Heat, Mavericks and Rockets use their own companies.

The 3-8 Mercury has been hit hard on the road. The team is 1-5 away from the Footprint Center and only recently ended its winless trek across the United States at four games.

“That’s the reality of life, (due to) our early-season schedule,” Mercury coach Vanessa Nygaard said. “This is just part of what we’re doing. We’re a little banged-up right now – a little short-handed with some COVID illnesses.”

The team played with eight players, the allowed minimum, at the Los Angeles Sparks on May 25th. Sophie Cunningham, the team’s sharp-shooting 3-point specialist off the bench, was placed on the health and safety protocols list that morning. Many players have stated that commercial flights are contributing to the spread of COVID-19 in the league.

Following the 94-84 loss to the Dallas Wings on May 19th, Taurasi blasted the commercial flight situation, giving another wave of COVID-19 outbreak throughout the United States.

“We have players out, staff, trainers, coaches, you know, it’s the situation that we are in,” Taurasi said. “We find ourselves always in these conditions that are tough. We are in these airports that obviously in the summer are crowded, people go on vacation. … We (traveled) to Vegas, there were thousands of people in the casino. You just have to be as safe as possible with the conditions the way they are.”

Earlier in June, Seattle Storm star forward Breanna Stewart also tested positive for COVID, and she let it known how she felt about the WNBA and flying commercial on social media by retweeting an injury report and posting, “Fly commercial they say…”

Mystics’ guard Natasha Cloud expressed similar beliefs when she, too, was placed in health and safety protocols May 10th, tweeting, “Shoutout to the @WNBA for flying us commercial during a pandemic. (And no mask mandates)”

The New York Liberty, under new owners Joe and Clara Wu Tsai, flew chartered flights for the second half of the 2021 season to avoid health hazards and logistical problems.

Because the team repeatedly flew on upgraded flights instead of standard commercial ones – which to the eyes of the WNBA, was a sign of a competitive advantage – the organization was levied a $500,000 dollar fine.

Sports Illustrated reported that the league was considering “losing ‘every draft pick you have ever seen’ to suspending ownership, even ‘grounds for termination of the franchise.’”

The Liberty lost each of those road games during that stretch.

Myles Ehrlich, a beat writer covering the Liberty for Nets Republic and Winsidr – a WNBA-centric platform – said “the chartered flights conversation has been there for years.”

The challenge is that the WNBA is using the $75 million it received during the past two years from over two dozen investors primarily on marketing and upgrading the league’s digital products, the New York Times reported in February.

“At that time, I hadn’t known anything about what was going on behind the scenes,” Ehrlich said. “Kathy kind of pushed the question aside, with the greater context now in play.”

Last September, the WNBA Board of Governors considered a proposal to make charter flights the de-facto option for the next three years. It fell through, as some owners were concerned that players would get used to the ample legroom and other amenities, Sports Illustrated reported.

Los Angeles Sparks center Liz Cambage, who is 6-feet-8, said in February that she is upset nothing has been done to accommodate players of her build for air travel.

“It’s frustrating because I played overseas, and I know the treatment and the standard of how athletes, period, should be treated,” Cambage said. “It’s hard to come here and fly economy, fly exit rows. It’s tough, especially when this league is full of owners and GMs that want to do more.”

Engelbert said in an interview with ESPN that the league cannot afford to fund charter flights.

“It would be more than $20 million a year to fund charter flights for an entire WNBA season,” she said, adding that the only way the league could afford the flights is if sponsors or supporters agreed to fund them.

Until the players’ union and the owners come together for a new Collective Bargaining Agreement in 2025 at the earliest, the players will have to keep waiting. Until then, they will have to just sit tight in row 24A of their standard commercial flight.