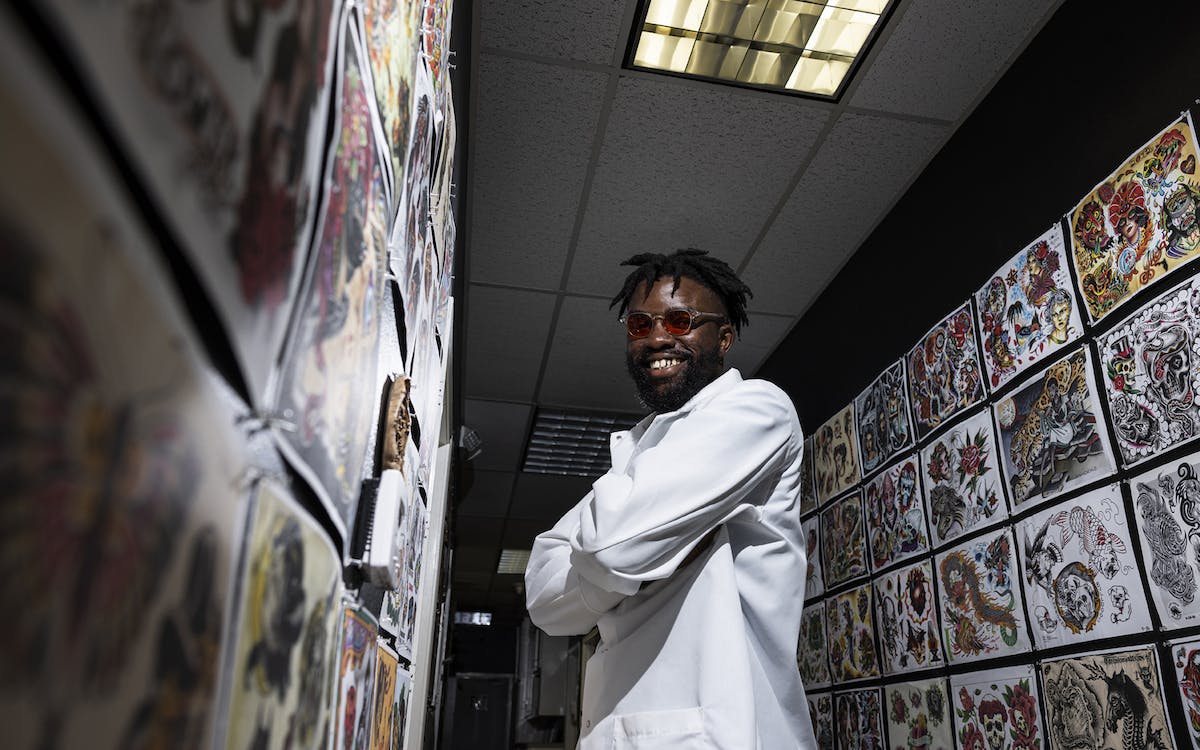 So, when he was given the task of studying how the mechanisms of tattooing could be used as an intradermal drug delivery system, it was right up his alley.

As a qualifying exam for his doctoral program, Lawal, a doctoral candidate in the Department of Chemical Engineering, housed within Texas Tech University’s Edward E. Whitacre Jr. College of Engineering, was given six weeks to design a project to investigate the physics involved in intradermal drug delivery using tattoo devices.

“I took interest in it because I didn’t know people actually researched tattoos,” he said. “I don’t have one of my own, but I find tattoos really cool. So, I was like, ‘whoa, yeah, I’m in.’ Even after I was done with the project I continued to work on it to a point where I was able to publish a paper.”

The paper, “Visualization of drug delivery via tattooing: effect of needle reciprocating frequency and fluid properties,” was published in January and examines the underlying physics involved in the tattooing process with the aid of high-speed imaging.

In March, Lawal presented his research at a meeting of the American Physical Society, with a video that demonstrates his work.

“In our lab, we record each injection in slow motion and we have skin models. We’re able to observe how this ink is delivered into the skin and what the mechanism is that drives it.”

While past studies had investigated the potential of tattooing as a drug injection technique, there was little understanding of the fluid dynamics involved in the process. Lawal’s research provided insight into a different method for delivering fluids that could provide a useful system for administering vaccines in the future.

As it stands vaccines are delivered by hypodermic needles. The needles are hollow and the delivery mechanism is to push them through the skin and into muscle, depress the syringe and push the fluids through the hollow tube of the needle.

Tattoo needles work differently. Rather than being hollow and having fluid passed through it, a tattoo needle is dipped in ink. And, unlike a hypodermic needle, a tattoo needle’s purpose isn’t to penetrate muscle but to puncture skin.

As the tattoo needle withdraws the small puncture wound created by the micro-injury begins to close and is filled with the ink the needle was dipped in.

Using the high-speed cameras, Lawal was able to demonstrate exactly how ink is delivered and how the skin, the largest organ in the human body, reacts.

It’s this reaction that could lead to a medical breakthrough.

“What you have at the end of a tattoo is hundreds, maybe even thousands, of micro-injuries, from these small needles,” Lawal said. “That leads to the immune system’s inflammatory response kicking in and with that is a flood of immune cells.”

The injuries on the skin each attract immune cells to the injured area, including immune mast cells called macrophages.

“Immune cells are always patrolling,” Lawal explained. “Once they find something, an imposter – which typically happens by immune cells binding to this imposter’s antigen – they can then signal for more immune cells to flood the site. This ostensibly happens at the sites of the micro-injuries and is the proposed reason for the heightened immune response.”

Lawal’s research also looked at the viscosity of the fluids being injected, an important factor for the potential uses of tattoo needles in the medical field, where DNA vaccines are typically too thick to circulate using the intramuscular method.

The use of tattoo needles brings with it the possibility of applying vaccines to a larger area of the skin using multiple smaller punctures. The larger application area and the response of the body’s immune system also allow for the possibility of smaller doses and fewer side effects.