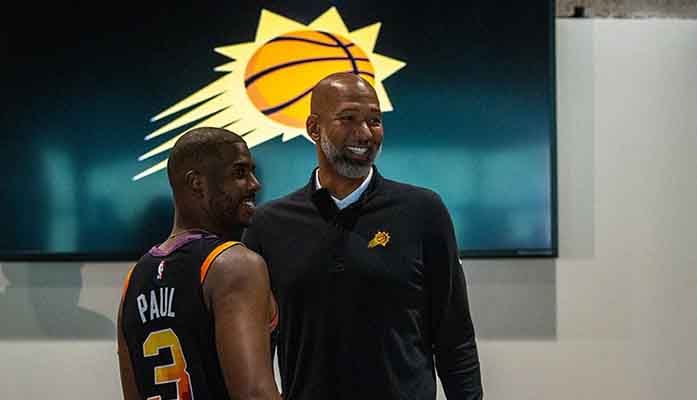 PHOENIX – For a franchise coming off an extraordinary 64-win regular season, the Phoenix Suns faced an offseason that can best be chronicled as tumultuous and bizarre.

As with every season, media day marks the start of training camp, and for the Suns, it’s the end of what has been a story of plot twists.

From the glaring findings in the investigation of longtime Suns and Mercury owner Robert Sarver to the sudden departure of veteran forward Jae Crowder, the team has endured a multitude of issues as a franchise. Those issues and more were brought to focus in a very somber and serious line of questioning during Monday’s Suns Media Day.

The issue surrounding Sarver has been the latest lead headline in recent weeks. After the bombshell report that the 17-year owner will begin the early stages of selling both the Mercury and the Suns, the focus has been on how the team will move forward.

Suns coach Monty Williams spoke on the ownership issue hanging over the franchise and how he plans to lead this team back in the right direction.

“When I first came to Phoenix, I asked myself how do I add value? The one way I know how to add value is by loving and serving others,” said Williams, who is entering his fourth season with the team. “Our guys are ready to go. Having a long summer like this has paid dividends for our players. It is the first true offseason since I’ve started coaching this team.”

Williams will have most of his core group back for the upcoming season, but there will be a missing face in the starting lineup on opening night. The Suns and Crowder agreed that the forward will not participate in camp as the team searches the trade market to find a new landing spot for the hard-nosed veteran. Crowder reacted to the decision on his personal Twitter account.

ONE MUST SEEK WORK WHERE HE IS WANTED.. WHERE HE IS NEEDED.! I AM THANKFUL FOR WHAT THESE PAST 2 YRS HAVE TAUGHT ME.! NOW I MUST TAKE ON ANOTHER CHALLENGE WITH CONTINUED HARDWORK & DEDICATION.! FOR THOSE OF YOU WHO CLOSED THE DOOR ON ME…. THANK YOU! 99 BACK SOON.! 🥷🏾🤫🤐

“It’s a little unfortunate. He’s done a lot of really good things, but I wish him the best as a brother,” Suns guard Booker said. “There is only so much I can say, but it all has to do with moving forward.”

Crowder has carved out a role in the league in the last couple of years as a versatile wing who can defend at a high level while also being able to knock down three-pointers at a career 35% clip. His career average of 9.6 points may not pop off the statistics sheet, but his presence on the court has been an integral piece on numerous contending teams over the years, including the Suns.

With every offseason departure comes an opportunity for another player to step in and contribute.

Luckily for Suns big man Dario Šarić, the departure of Crowder could free up a larger role for the talented Croatian. Coming off a successful arthroscopic procedure on his right meniscus, he enters the season looking to hop into a well-rounded frontcourt rotation.

Offensively, it’s simple. Šarić can do it all. 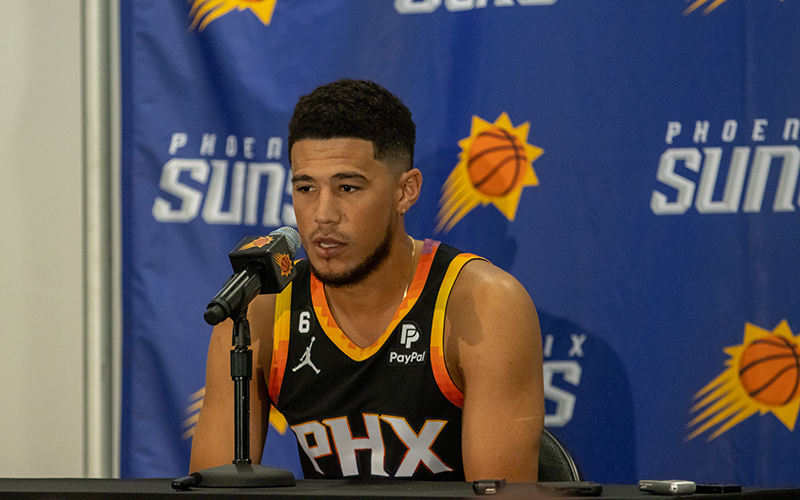 Suns guard Devin Booker said the offseason “was tough for me because that is not the Robert Sarver I know.” (Photo by Susan Wong/Cronkite News)

Šarić hit the hardwood for the Croatian national team during the Fiba EuroBasket tournament earlier this month in his first game since July of 2021. For him, gaining those reps against elite international talent expedited his rehab progress, and started to crack a glimpse of what his role could look like this season.

“In the second unit, I could’ve helped with ball movement,” said Šarić, who is entering his fourth season with the Suns. “I can go in the low post, and I can pass out of the post as well.

“I am happy I am here, and all this work and mental hurdles are behind me.”

He will join a frontcourt rotation led by former first overall pick Deandre Ayton, who was involved in contentious contract negotiations dating all the way back to the beginning of last season.

Ayton was not his characteristically buoyant self when fielding questions about his offseason, his new contract and the Sarver situation.

It is unclear whether he has lingering hard feelings about the contract situation, or if he is just more focused on returning with a more business-like attitude.

That question and others will have to be answered as training camp and the preseason quickly near.