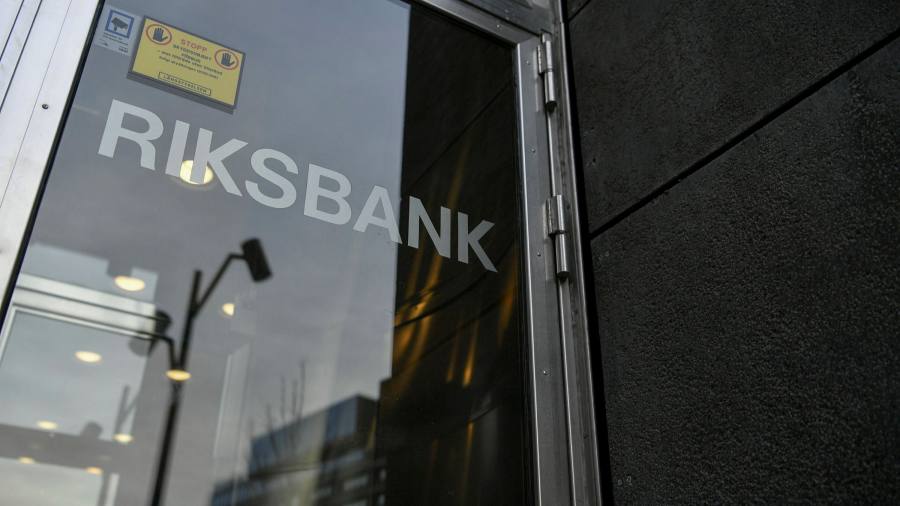 Sweden’s central bank has joined the growing line of monetary authorities to have raised interest rates by a more aggressive half a percentage point in response to soaring inflation.

The Riksbank, saying that “price increases are spreading through the economy”, on Thursday announced it would raise its main policy rate by 50 basis points to 0.75 per cent, in line with market expectations. The bank signalled more increases this year.

The central bank said it would shrink its balance sheet faster than initially announced in April when it said it would buy SKr37bn ($3.6bn) of bonds in the second half of the year, half the level of the first six months.

The rate rise followed a 25bp increase in April and came in response to a sharp acceleration of Swedish inflation, which rose to 7.2 per cent in the year to May, the fastest increase for 31 years. The bank’s target rate is 2 per cent.

The Riksbank board forecast that “the policy rate will be raised further and that it will be close to 2 per cent at the start of next year”. It said Swedish inflation was expected to remain above 7 per cent for the rest of the year and it aimed to “counteract the high inflation becoming entrenched in price setting and wage formation”.

Analysts believe the Riksbank is raising borrowing costs in anticipation of likely rate rises by the European Central Bank and US Federal Reserve in July, which could put downward pressure on the krona.

“The Riksbank holds fewer meetings each year than other central banks, and that means it has to make each one count,” said analysts at ING in a note this week.

“The ECB is poised to hike twice before Swedish policymakers meet again in September, and the Riksbank will want to get out in front — not least given the recent depreciation in the krona.”