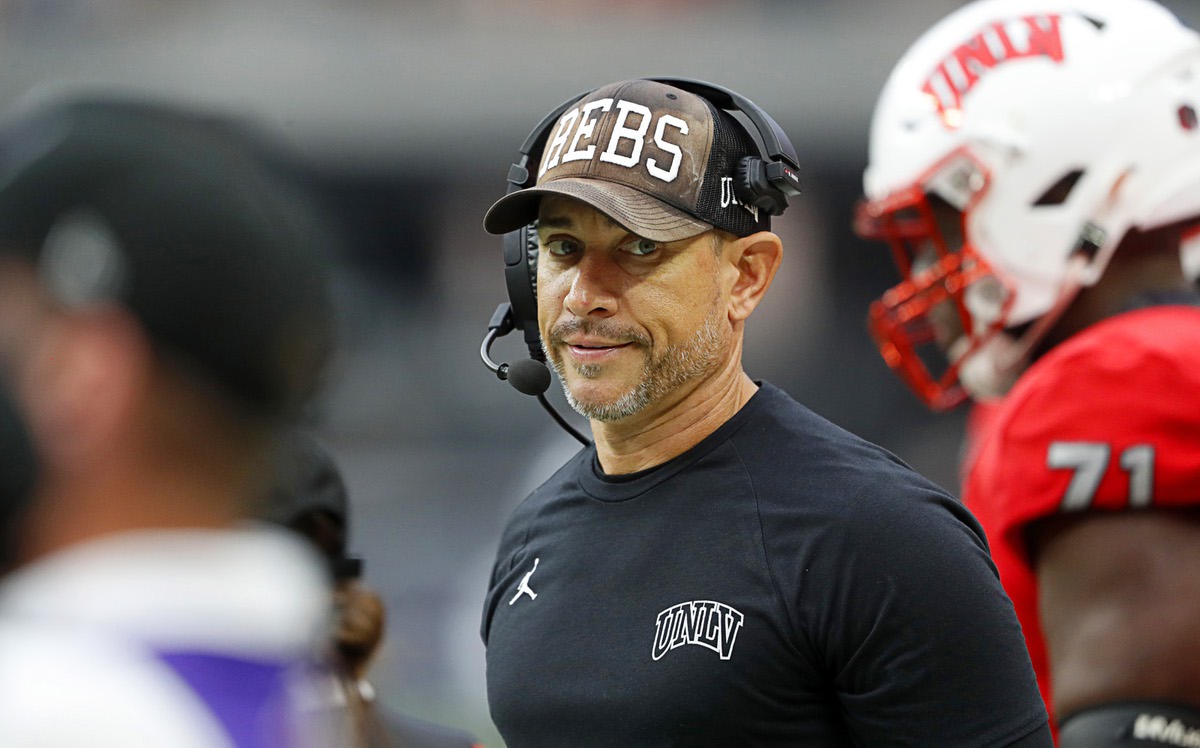 UNLV Rebels head coach Marcus Arroyo is shown on the sidelines during an NCAA college football game against the Idaho State Bengals at Allegiant Stadium Saturday, Aug. 27, 2022, in Las Vegas.

UNLV football is back from the dead.

Through a quirk of the bowl eligibility rules, it appears as though the Scarlet and Gray’s 2022 campaign may not come to an end on Saturday — if they can beat UNR.

A win in the season finale would improve UNLV’s record to 5-7, which ordinarily wouldn’t be good enough to get them to a bowl game — the NCAA’s benchmark for postseason eligibility is six regular-season wins. But with 41 bowl games scheduled, there are currently not enough six-win teams to fill all 82 slots, and there’s a chance there will still be openings after this weekend’s action.

If there aren’t enough six-win teams, the bowls can then accept five-win teams, and here’s where it gets interesting for UNLV: Those slots are dictated not by TV ratings or the ticket-buying power of the fan base, but by APR score.

The APR, or Academic Progress Rate, is an equation that measures the percentage of players in a program who are academically eligible and on track to graduate. And UNLV currently has the second-highest APR score of all teams with a chance to finish with five wins this weekend, trailing only Rice.

Basically, good grades will bump zombie UNLV to the front of the line if they take care of business against UNR.

How likely is it to happen? Likely enough that even Marcus Arroyo must be smiling right now.

The Athletic projected out every bowl slot, and their forecast has 80 teams making it with six wins, and Rice and UNLV sneaking in the side door via APR. In that scenario, UNLV heads to Orlando, Fla., to take on UConn in the Cure Bowl on Dec. 16.

Brett McMurphy of Action Network did a similar projection and also has UNLV making the cut, traveling to Myrtle Beach, S.C., to face Liberty in the Myrtle Bowl on Dec. 19.

All of a sudden, Saturday’s game has huge stakes for the Scarlet and Gray. Not only will Arroyo be trying to win the Fremont Cannon for the first time, but the team can punch a ticket to a bowl game for the first time since 2013.

It’s not going to be easy to bounce back from last week’s shocking loss at Hawaii.

It was UNLV’s sixth straight defeat and eliminated the Scarlet and Gray from bowl contention, or so everyone thought at the time. It was reported that several key players and team leaders were emotional afterward, to the point of shedding tears outside the locker room.

Now they’ll have to refill the tank and do battle against a UNR team that takes the Fremont Cannon way more seriously than UNLV does. The Wolf Pack may be 2-9 on the season and 0-7 in Mountain West play, but they’ll go down fighting. And the chance to play spoiler will no doubt serve as added motivation.

On its own, a win won’t be enough for UNLV — the team is also going to have to do some scoreboard watching throughout the day.

There are currently 75 teams who are already bowl eligible with six wins. There are another 13 teams with five wins who could win their way in this weekend, so UNLV would need eight of them to lose to feel good about their chances.

If you’re a UNLV fan, here’s who you are rooting against in order to make room for UNLV: