Summer of misery ahead for UK rail and air travellers 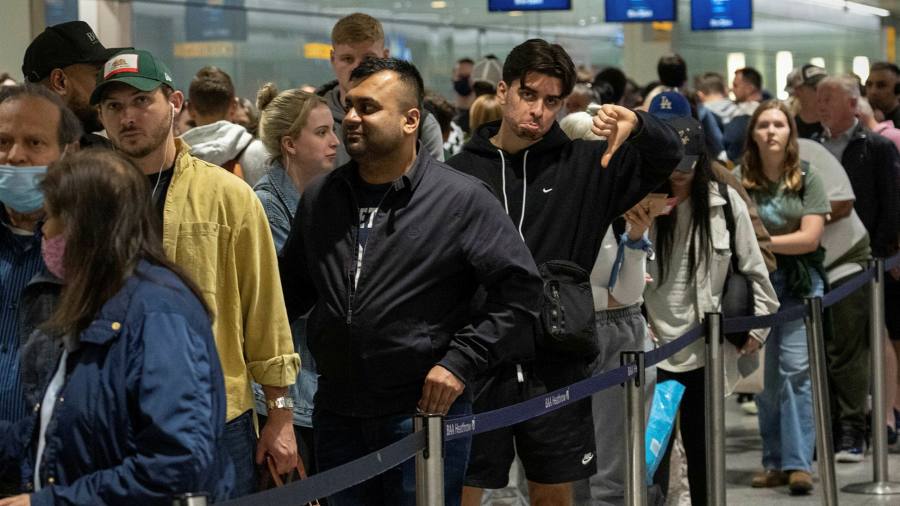 Travellers in the UK will be hit by a summer of travel misery as the chief executive of London’s Heathrow airport warned it would take up to 18 months for the aviation industry to return to pre-pandemic levels and the largest rail union announced the biggest strike action in 30 years.

Thousands of holidaymakers have been stranded over the last week with hundreds of flights cancelled due to staff shortages and air traffic control delays.

“I think it will take 12 to 18 months for the aviation sector to fully recover capacity, so we will have to really carefully manage supply and demand,” John Holland-Kaye, Heathrow’s chief executive, told the Financial Times’ Global Boardroom conference.

The aviation industry cut tens of thousands of jobs during the pandemic and is now struggling to rehire after demand for travel snapped back very quickly this year. Holland-Kaye said ministers could help by further easing the rules around security background and employment history checks for new staff.

Meanwhile, the UK rail network will be severely disrupted after the RMT union said more than 40,000 workers would stage three days of walkouts on June 21, 23 and 25.

The union said the initial protests would “shut down” the entire network after it failed to reach a settlement with infrastructure operator Network Rail and more than a dozen train operators. RMT leader Mick Lynch promised a “sustained campaign” of action, suggesting the union may announce additional strikes over the summer.

Industry bosses said that by staggering the stoppages, the rail network would also be badly hit on the days between the three walkouts because staff would not have clocked on to their shifts the previous night

“We are essentially out for the week,” said one executive. The strike action is more damaging than previous walkouts because it includes Network Rail signallers.

On the railways, freight will be prioritised during the strike to ensure supply chains continue to function, and intercity services will be given priority over commuter trains, according to people familiar with the industry’s emergency plan.

Airports race to fill thousands of jobs cut during pandemic

One train operating company said it expected to run around 20 to 30 per cent of its timetable on strike days.

“While we will keep as many services running as possible, sadly if this action goes ahead, significant disruption will be inevitable,” said Steve Montgomery, chair of the Rail Delivery Group, an industry body.

The RMT is at the vanguard of a “summer of discontent” which could also involve industrial action by two other rail unions, the TSSA and Aslef. It said rail companies and ministers would need to come up with new proposals if they wanted to prevent “months of disruption”.

The unions are protesting against multiyear pay freezes and the possibility of thousands of job cuts.

“Despite intense talks with the rail bosses, RMT has not been able to secure a pay proposal nor a guarantee of no compulsory redundancies,” it said in a statement. The union also announced a localised strike on the London Underground on June 21. Grant Shapps, transport secretary, said the announcement was “incredibly disappointing” and warned that the action could drive passengers away from the rail network just as it was beginning to recover from the pandemic.

The RMT’s announcement comes against a backdrop of rising industrial unrest, as inflation erodes workers’ earnings and many employers are struggling to fill vacancies. The CWU communication workers’ union warned on Tuesday that a pay dispute at Royal Mail could also be heading towards a ballot on nationwide strike action.

On Monday 500 staff at British Airways began voting on whether to strike in a row over pay, with the union Unite warning it would time any industrial action with the summer holidays to cause maximum disruption.

In West Yorkshire around 700 bus workers, including drivers and engineers, have been on strike indefinitely since Monday, demanding a 10 per cent pay rise from operator Arriva. Services have been suspended as a result.