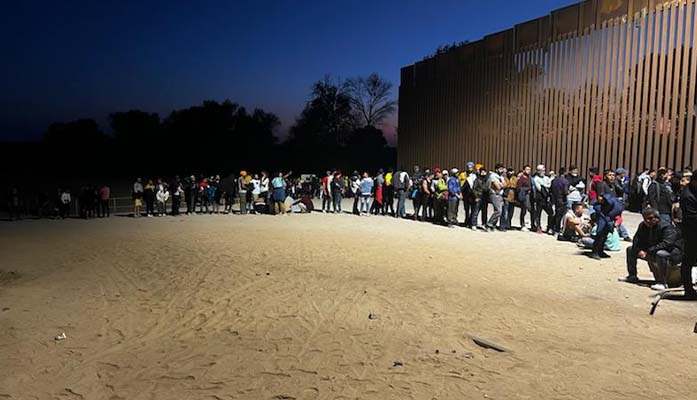 News that the Biden administration’s plan to end Title 42 has been halted by a federal judge has not reached the thousands of aliens that continue to flood across the U.S. – Mexico border in the Yuma Sector.

Just on Saturday alone, between 1,000 to 1,300 illegal aliens entered the U.S. near the Morelos Dam, where the border is essentially wide open.

The news of the federal judge’s ruling was welcomed by Border Patrol agents, law enforcement officials and community leaders, who have been buried under the sheer volume of entries since January.

According to one top law enforcement officer, speaking off the record, “The Yuma Sector has probably hit 200,000 apprehensions here this fiscal year. We had 138,000 last year. Most we’ve ever had. We are obviously well past that now. In April, we about 27,000 enter, and no idea how many got-aways.”

The officer told the Arizona Daily Independent that they have discovered 21 bodies in the desert so far this year, and “we had a total of 35 for all of last year.”

The social welfare organizations tasked with caring for the new arrivals cannot keep up with the need either.

With the Biden administration planning to appeal the federal judge’s ruling, the increase in arrivals is expected to continue highlighting the inability to keep up by both the Border Patrol and the social welfare organizations.

“It is insane that a President of the United States would deliberately work against the interests of his own country and his own people the way that Joe Biden is doing,” said State Senator David Gowan, who represents a border district in the Arizona State Senate. “He is encouraging our country, our hospitals, our schools, and our communities to be overrun by foreign nationals with no legal right to be here. November truly can’t come soon enough.”