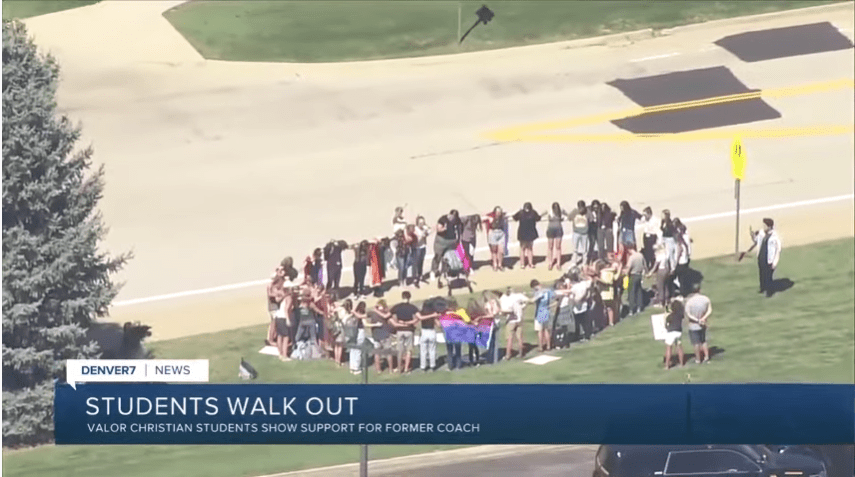 Two coaches at Valor Christian High School in Highlands Ranch, Colorado, have recently alleged they were forced from their jobs because they’re gay. Inoke Tonga, who coached junior varsity girl’s volleyball, says the school made him choose between denouncing his sexual orientation and keeping his job. Lauren Benner, who coached women’s lacrosse at the school and was once coach of the year, says a similar situation happened to her back in 2019. Now, students are protesting in solidarity.

On Tuesday, about 30 students left class to support Tonga. The students also want the school to make big-picture changes to its policies and the overall culture. Sixteen-year-old Lucy Sarkissian organized the protest and told local outlet CBS4 that it’s heartbreaking for queer teenagers to be told they’re essentially a “danger.”

Cole Watson, an alumnus of the school who graduated in 2018, attended the protest and told News9 he was out of the closet despite a less than welcoming environment. “I had a teacher in one of my classes lead a discussion about what part of Hell I would end up in because of my choices,” Watson recalled.

Like any good organizer, Sarkissian has clear demands for the school. “Number one is going to be not firing teachers based off of their sexuality,” she stated. “Additionally, we would like to see that students are able to be more open about their sexuality without fear of being reprimanded by the deans.”

In speaking to the local CBS outlet, Tonga described the school’s stance toward him as, “Their terms were renounce being gay or be released as a coach fully.” In a Facebook post, Tonga says he received a “culture document” during his interview for the job that did not mention “anything” about its stance on LGBTQ+ issues.

Benner has decided to share her experience in solidarity and to raise awareness—and it’s notably similar to Tonga’s allegation. “If I decided that I wanted to pursue a relationship with another female that I would no longer be in alignment with Valor’s culture statement and that I would be asked to leave,” Benner told The Denver Channel. “It’s not, ‘You’re fired,’ it’s, ‘You’re no longer in alignment.'”

Benner says she initially denied she was dating a woman to keep her job. But school administrators confronted her, saying their practice was to match a gay employee with a “spiritual partner” who would guide them to believe that “homosexuality is wrong.”

Benner shared a lengthy statement about her experience on Instagram, in which she describes finally leaving the toxic environment. When Benner ultimately decided to leave the position, she says she had to edit her farewell email to students and parents explaining her departure; the school deemed it too “mature.” Benner says she was simply honest about her sexual orientation and stated clearly that the school was no longer safe for her.

In speaking to CNN, Tonga said he knows he can be both a gay man and a Christian and that in his ideal world, he’d be happy to work with his students and continue to coach. Benner expressed similar sadness about leaving the students, saying she at one point thought her role there was the best job she’d ever had.

You can check out an interview with Tonga below.

You can check out an interview with Benner below as well.