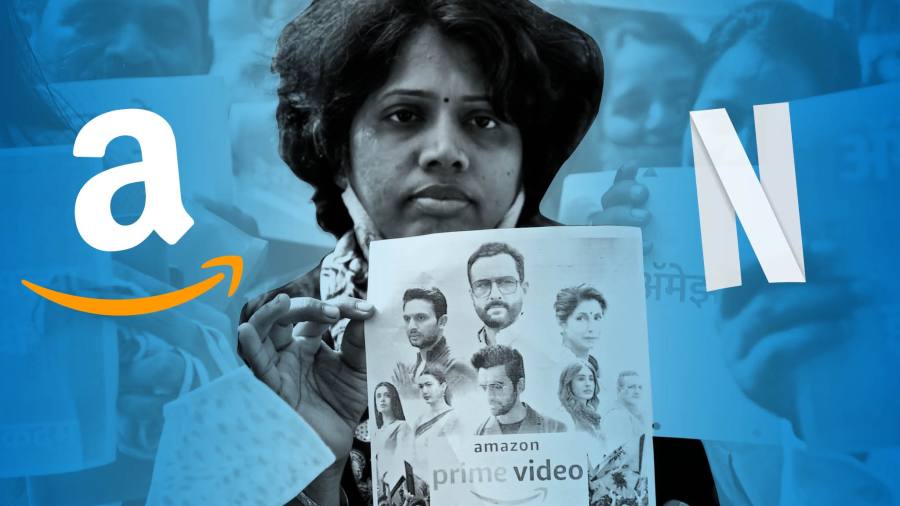 A handsome student leader struts on stage, his face painted the blue of the Hindu god Shiva. Before a chortling crowd at a leftwing university he cracks a series of irreverent, potty-mouthed gags about the poor state of political freedom in India, all while in character as the deity.

The backlash is an extreme example of the challenges confronting Amazon, Netflix and other international streaming services in India, a market of tantalising promise. From outcries about their edgy content to difficulties convincing consumers to pay to subscribe, they have found cashing in on the country’s entertainment-hungry audiences more complicated than initially imagined.

“They have not even scratched the surface,” said Mahesh Bhatt, a veteran Bollywood film-maker. “The audience which [streamers] are appealing to at the moment is a very small section of Indian society, which looks westwards or has a global mindset. But does it touch that Indian who is the heartbeat of this huge nation?”

With investors fixated on subscriber growth, success in India has become critical for US streaming giants — especially since they were shut out of China. No other emerging market is as big, accessible or as wildly enthusiastic about show business as India with its 1.4bn population. Already it accounts for roughly a quarter of Disney Plus’s 95m global subscribers.

“If China is not available to you and you have already conquered the US, you’re not going to be worrying about Spain,” said Efe Çakarel, founder of MUBI, a streaming service for cinephiles that launched in India in 2019. “India is the single most important territory after the US and China. So it became strategically crucial for the streamers.”

“[Streamers] have not even scratched the surface”

But for all its promise, India’s complex politics has become a stumbling block for big international services, while rapid expansion has been coupled with the realisation that a lucrative streaming business here may be some way off.

Although gritty thrillers or dark comedies delight critics and viewers, they often prompt outrage from the BJP, which is planning new regulations to rein in the freewheeling industry. And in a country where subscription businesses are in their infancy, groups have been forced to roll out ever more aggressive discounts and promotions.

“The customers are really clear about what they’d like to pay for and the value they seek in that,” Gaurav Gandhi, Amazon Prime Video’s India head, said.

The rosy optimism over India’s potential was best voiced by Netflix founder Reed Hastings when he declared in 2018 that the service’s “next 100m” subscribers would be in the country.

Netflix and Amazon have poured vast resources into winning eyeballs, experimenting with more pricing and marketing innovations in India than arguably any other international market. Behind their ambitions lies a relentless quest for scale for a business model where cost advantages increase with the number of subscribers.

Netflix spent more than $400m on its Indian content in 2019 and 2020, churning out award-winning productions such as Delhi Crime.

Guneet Monga, an Oscar-winning Indian film producer, said international streamers bankrolled a creative boom. Streaming “has created space for many more actors, writers and directors to come in”, she said. “It is far more powerful, far better financed, the footprint is far bigger because the need for content is far larger.”

Late-entrant Disney leapfrogged its rivals when it acquired 21st Century Fox, a deal which brought Indian broadcaster Star and streaming platform Hotstar, which hold the rights to popular cricket tournaments including the Indian Premier League.

This helped to spark a price war. The newly rebranded Disney Plus Hotstar, which launched last April, offers subscriptions ranging from free limited access to a Rs1499 ($20) yearly package which offers Indian shows, Disney and HBO along with cricket and Premier League football and more.

Netflix slashed its rates to offer a mobile subscription at Rs199 a month. Amazon last month launched its own mobile offer for Rs89, and is also entering live sports with the India rights for New Zealand cricket.

Yet subscriber numbers remain relatively modest. Netflix had just 4.5m in India by the end of 2020, according to Media Partners Asia, compared with more than 200m overall. The consultancy estimates that Amazon, which bundles video into its broader Prime offerings, has 17m out of a global total of more than 150m. Disney had about 28.5m Hotstar subscribers at the end of December, the vast majority in India.

Despite low prices by global standards, executives say Indians outside affluent hubs remain reluctant to sign up given the unfamiliarity with subscription models and rock-bottom cable TV prices. “The propensity to spend on content is growing but very small today,” said Satyan Gajwani of the Times Group, a media conglomerate with its own advertising-driven streaming service.

There is a limit to how far Netflix will follow its rivals in chasing an audience. Disney’s average revenue per Hotstar user is just $0.90, compared with $5.37 for its non-Hotstar subscribers. MPA puts Netflix’s India user revenue at $4.90, compared with about $9 across Asia Pacific.

Disney is on course to pip Netflix to Hastings’ coveted 100m target. “They’re well on track,” said MPA vice-president Mihir Shah. “For Netflix, they need to gear up now.”

Creativity vs the censors: ‘It has definitely got more intense’

International streaming companies now face their biggest challenge yet as authorities prepare to bring them under official oversight.

But this made them a target of India’s vocal Hindu rightwing, who rail against corrupting outside influences. BJP politicians responded furiously to Netflix’s A Suitable Boy over a scene depicting a Muslim boy kissing a Hindu girl in a temple.

“It has definitely got more intense,” Monga said. “We are all grappling with where does this stop, and where are the limits in India.”

New Delhi has rebuffed industry pleas to accept a self-regulatory code. When a BJP lawmaker warned in parliament this month that Netflix and others could corrupt Indian youth and undermine national values, minister Prakash Javadekar replied that regulation “shall be implemented very soon”, without clarifying what those rules would look like.

Shubhra Gupta, a prominent film critic, said it was inevitable that India would seek to exert greater control over streaming services once they gained scale.

“This is something that would have happened sooner versus later,” she said. “Anything that is unfettered — which goes out to millions of people, without any kind of checks on how this is going to play out — was never going to be a tenable thing for India.”

Speaking before the Tandav controversy, Gandhi said Amazon was “committed to offering the right balance [between] high-quality content to our audiences and offering freedom to our creators, while respecting the legal and cultural sensitivities of the country”.

The heavy-handed tactics used against Amazon’s Tandav have played into wider concerns about eroding freedom of expression in India. Industry insiders fear this could pose a commercial risk, with self-censorship hurting companies’ reputations and damping the creative licence that made their productions popular to begin with.

For now, though, the streaming giants remain undeterred. Disney’s share price has risen more than a third in the past year, despite the pandemic hitting cinemas and theme parks, as investors rallied around a streaming push whose heady growth was fuelled by India.

“Whoever gains that 100m subscribers will achieve breakout value, both in terms of market dominance and in terms of the health of the business,” said one streaming executive.