Steel plant under siege; Zelenskyy prepares for US officials 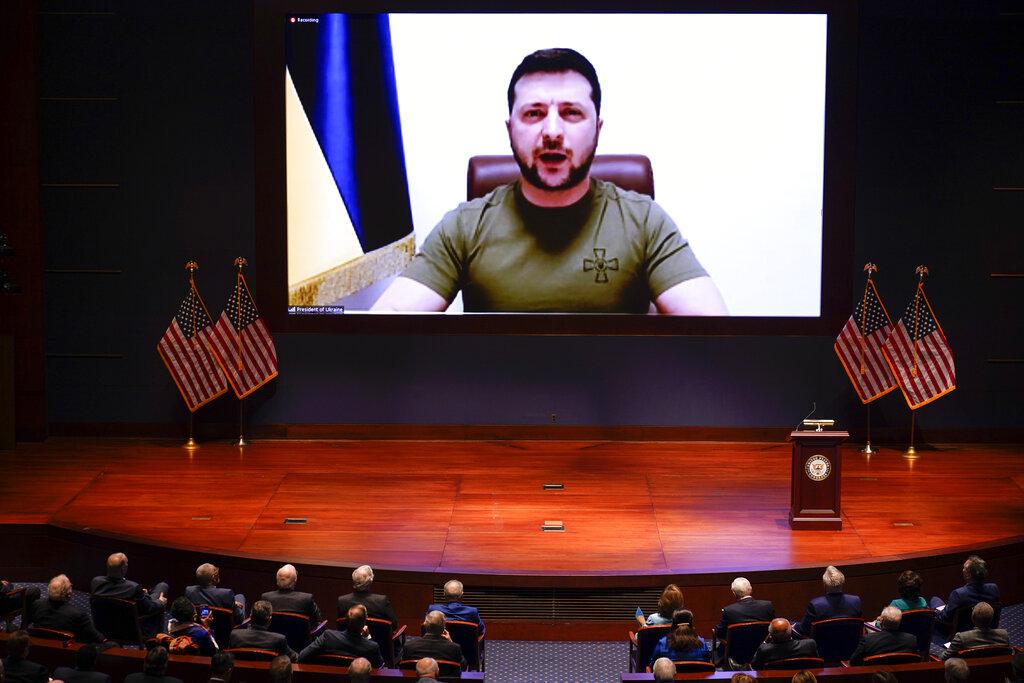 Ukrainian President Volodymyr Zelenskyy speaks to the U.S. Congress by video to plead for support as his country is besieged by Russian forces, at the Capitol in Washington, Wednesday, March 16, 2022.

Zelenskyy in a news conference gave few details about the logistics of his upcoming encounter with Blinken and Austin but said he expected results — “not just presents or some kind of cakes, we are expecting specific things and specific weapons.”

It would be the first high-level U.S. trip to Kyiv since before the war began on Feb. 24. While visiting Poland in March, Blinken stepped briefly onto Ukrainian soil to meet with the country’s foreign minister. Zelenskyy’s last face-to-face meeting with a U.S. leader was Feb. 19 in Munich with Vice President Kamala Harris.

Russia’s effort in Mariupol is aimed at crushing the last pocket of resistance in the city, a place of deep symbolic and strategic value to Moscow. Completing its capture would give Russia its biggest victory yet, after a nearly two-month siege reduced much of the city to a smoking ruin.

In attacks on the eve of Orthodox Easter, Russian forces also pounded cities and towns in southern and eastern Ukraine.

“The war started when this baby was 1 month old. Can you imagine what is happening?” Zelenskyy said. “They are just bastards. … I don’t have any other words for it, just bastards.”

The Ukrainian military said Saturday it destroyed a Russian command post in Kherson, a southern city that fell to Russian forces early in the war.

The command post was hit on Friday, killing two generals and critically wounding another, the Ukrainian military intelligence agency said in a statement. The Russian military did not comment on the claim, which could not be confirmed.

The fate of the Ukrainians in the sprawling and besieged seaside steel mill in Mariupol, where Russia says its forces have taken the rest of the city, wasn’t immediately clear.

A Ukrainian military unit on Saturday released a video reportedly taken two days earlier in which women and children holed up underground, some for as long as two months, said they longed to see the sun.

“We want to see peaceful skies, we want to breathe in fresh air,” one woman in the video said. “You have simply no idea what it means for us to simply eat, drink some sweetened tea. For us, it is already happiness.”

In Sloviansk, a town in northern Donbas, the AP witnessed two soldiers arriving at a hospital, one of them mortally wounded.

Sitting in a wheelchair outside her damaged Sloviansk apartment, Anna Direnskaya, 70, said, “I want peace.”

One of many native Russian speakers in eastern Ukraine, Direnskaya said she wishes Russians would understand that Ukrainians are not bad people and that there should be no enmity between them.

British officials said Russian forces had not gained significant new ground, but Ukrainian officials announced a nationwide curfew ahead of Easter Sunday, a sign of the war’s disruption and threat to the entire country.

Mariupol has been a key Russian objective and has taken on outsize importance in the war. It would deprive Ukraine of a vital port, free up Russian troops to fight elsewhere, and establish a land corridor to the Crimean Peninsula, which Moscow seized in 2014. Russia-backed separatists control parts of the Donbas.

An adviser to Ukraine’s presidential office, Oleksiy Arestovych, said Russian forces resumed airstrikes on the Azovstal plant and were also trying to storm it, in an apparent reversal of tactics. Two days earlier, Russian President Vladimir Putin had given an order not to send troops in but instead to blockade the plant.

Ukrainian officials have estimated that about 2,000 of their troops along with civilians are taking refuge in its tunnels.

Earlier Saturday the Azov Regiment of Ukraine’s National Guard, which has members holed up in the plant, released the video of around two dozen women and children. Its contents could not be independently verified, but if authentic, it would be the first video testimony of what life has been like for civilians trapped underground there.

The video shows soldiers giving sweets to children who respond with fist-bumps. One young girl says she and her relatives “haven’t seen neither the sky nor the sun” since they left home Feb. 27.

The regiment’s deputy commander, Sviatoslav Palamar, told the AP the video was shot Thursday. The Azov Regiment has its roots in the Azov Battalion, which was formed by far-right activists in 2014 at the start of the separatist conflict in eastern Ukraine and has elicited criticism for some of its tactics.

More than 100,000 people — down from a prewar population of about 430,000 — are believed to remain in Mariupol with scant food, water or heat. Ukrainian authorities estimate that over 20,000 civilians have been killed in the city.

Yet another attempt to evacuate women, children and older adults from Mariupol failed Saturday. Petro Andryushchenko, an adviser to Mariupol’s mayor, said Russian forces did not allow Ukrainian-organized buses to take residents to Zaporizhzhia, a city 227 kilometers (141 miles) to the northwest.

“At 11 o’clock, at least 200 Mariupol residents gathered near the Port City shopping center, waiting for evacuation,” Andryushchenko posted on the Telegram messaging app. “The Russian military drove up to the Mariupol residents and ordered them to disperse, because now there will be shelling.”

At the same time, he said, Russian buses assembled about 200 meters (yards) away. Residents who boarded those were told they were being taken to separatist-occupied territory and not allowed to disembark, Andryushchenko said. His account could not be independently verified.

In the attack on Odesa, Russian troops fired at least six missiles, according to Anton Gerashchenko, an adviser to Ukraine’s interior minister.

“Residents of the city heard explosions in different areas,” Gerashchenko said via Telegram. “Residential buildings were hit. It is already known about one victim. He burned in his car in a courtyard of one of the buildings.”

Zelenskyy’s news conference was held in a Kyiv subway station, where he paused at one point as a train noisily passed through. The subway system, which includes the world’s deepest station, attracted widespread attention early in the war when hordes of people took shelter there.

Regarding the expected visit Sunday by U.S. officials, Zelenskyy said: “I believe that we will be able to get agreements from the United States or part of that package on arming Ukraine which we agreed on earlier. Besides, we have strategic questions about security guarantees, which it is time to discuss in detail, because the United States will be one of those leaders of security countries for our state.”