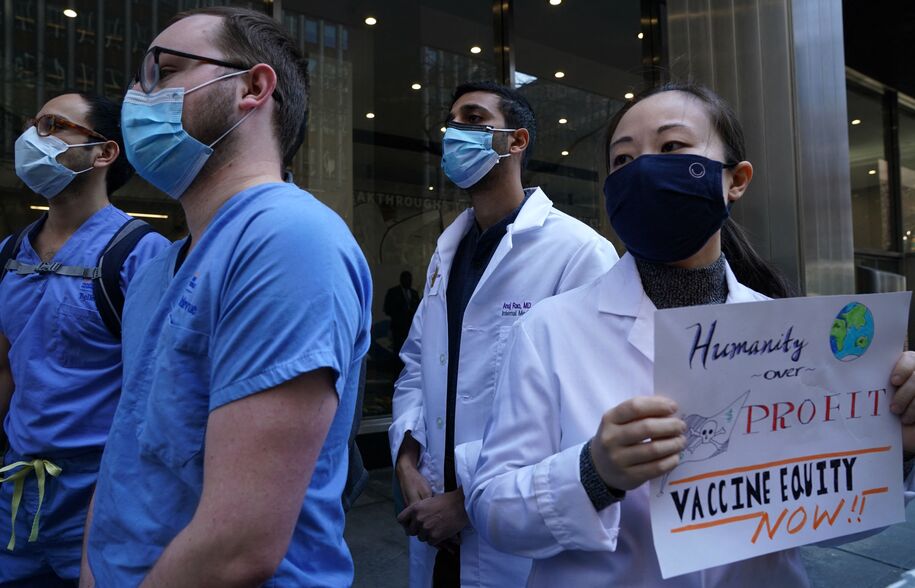 But the pandemic will not end like the flip of a light switch. The 1,500 Americans dying each day from COVID-19 are still 1,500 stories of grief and loss that will never be replaced. The end of the pandemic is being drawn out by governors who are dropping mask-mandates and reopening businesses in full knowledge of the threat these actions bring.

In communities of color, the grief is also being extended by an inability to get access to vaccines. And part of the problem is a lie that’s being repeatedly told about levels of vaccine acceptance in the Black community.

According to the CDC COVID-19 Data Tracker, the states of Georgia and Alabama are at the very back of the pack when it comes to getting vaccines delivered into the arms of their citizens. These states are running well behind even neighboring states like Mississippi and Florida both in the percentage of citizens vaccinated, and in the percent of vaccines actually administered.

As NPR reports, there’s at least one clear reason that vaccines aren’t getting where they’re needed in Georgia—officials are making assumptions about vaccine acceptance among the Black community that are based on preconceptions rather than looking at the facts on the ground.

It’s a story we’ve heard again and again since the beginning of the vaccine rollout. The shots that can keep people from getting COVID-19 are not being given equitably to people of color who are more likely to die of the disease. In Alabama, one Birmingham clinic that serves a mostly poor Black population has not been given a single dose.

The result of situations like this is that whites in Georgia are getting vaccinated at twice the rate of Blacks. And because Black workers have all the risks they’ve faced since the beginning of the outbreak—more likely to work essential jobs, less likely to have adequate access to health care—the lopsided rate of vaccination means that infections and deaths from COVID-19 are being preferentially shifted away from white communities into communities of color.

Jefferson County commissioner Sheila Tyson provides a number of reasons for this inequitable response. One of those is how Georgia, like many states, has depended on internet access to schedule vaccine appointments. Those who don’t have good internet, or the ability to spend time constantly searching for appointments, are being shut out. Transportation is also an issue, when vaccine events may be scheduled many miles away in areas not accessible by public transportation.

But in an interview with NPR’s Ari Shapiro, Tyson points out another frustrating factor that’s contributed heavily to the unequal rates of vaccination.

SHAPIRO: You said state leaders are telling you they are not distributing the vaccine to majority-Black neighborhoods because they expect people there are going to be vaccine-hesitant, that they’re not going to want to get vaccinated. Is that your experience when you talk to people? Is that what you hear?

TYSON: No. I am finding out thousands and thousands of people within the state of Alabama want the vaccine. We have over 125,000 people in Jefferson County on the waiting list. We want it now.

This idea that Black folks are unwilling to accept the COVID-19 vaccine is completely counter to information that is readily available. The latest numbers from Civiqs show that 57% of Black Americans who have not already been vaccinated are a definite “yes” for the vaccine. This compares with 40% for white Americans. Monmouth University measured the number of people unwilling to accept the vaccine, and found this to be 14% among people of color, and 28% percent among whites.

But the idea that Black people will not accept the vaccine continues to be pervasive, continues to appear in media accounts, and is clearly being used as an excuse to withhold vaccine from communities of color. As Tyson states in the NPR interview, there’s little that people or officials in these communities can do, because all of this is dependent on the actions at the state level.

It’s not clear how much this failure to meet vaccine demand in communities of color has contributed to the overall low level of vaccination in Georgia, but it’s obvious that each time vaccine is sent to areas where it is not used, there is a level of waste and a delay that can be extensive. As KSDK reported on March 1, of the doses sent to a vaccine event in one largely white rural county in Missouri, over half of the doses ended up not being utilized. Some of those doses had to be discarded after the vaccine was allowed to be thawed for too long. Three days later, Gov. Mike Parson admitted that the event had been a mistake saying, “That site should have never happened the way it did; that’s just the bottom line.”

As the St. Louis Post-Dispatch reported on March 4, Parson acknowledged that distribution vaccines was shortchanging urban areas. “A higher percentage of people are interested in receiving the vaccine in urban centers than in rural areas,” said Parson. However, Parson then announced he was making no change in that distribution, because “For the urban areas we know because the population is much larger, it’s just going to take much longer to do.” At the same time, Parson said people who live in rural areas “are less likely to want the vaccine.” That is in line with a Kaiser Family Foundation survey from February that found 3 in 10 rural Americans saying they would “definitely not” get the vaccine.

If that sounds like communities of color are continuing to be shortchanged even though Parson was absolutely aware that he was sending more vaccine than necessary to areas where it wasn’t going to be used … it sounded like that to local officials as well. After considerable pressure, Parson announced a change. As the Gasconade County Republican reported on March 10, Parson promised to make more vaccine available in “urban areas” and “vulnerable communities.” At the same time, he once again acknowledged again that demand for vaccine is not even.

“We do recognize that some Missourians are less interested in receiving the vaccine than others,” Parson said, noting people in urban areas tend to be more eager to be vaccinated.

This story is being replicated across the nation. The excuse may be that urban areas are “too large” to tackle right away, or it may be the persistent myth that Blacks are less likely to accept the vaccine. But the result is that Black Americans are getting vaccinated at a lower rate, despite a higher level of vaccine acceptance. This inequity demands to be remedied across every state.

With things getting better, there’s a real tendency to treat the pandemic is as if it’s over. As of now, after all these months, America can finally relax and just let the rest of this spool out toward an inevitable end. But there is still plenty of time to get sick, plenty of time to be left with a lifelong disability from the still mysterious effects of the virus, still plenty of time for families to suffer irredeemable loss. That burden should not fall unequally on communities of color—the way it has been falling, since the first moments of the pandemic.

Omicron variant is ’cause for concern, not panic’