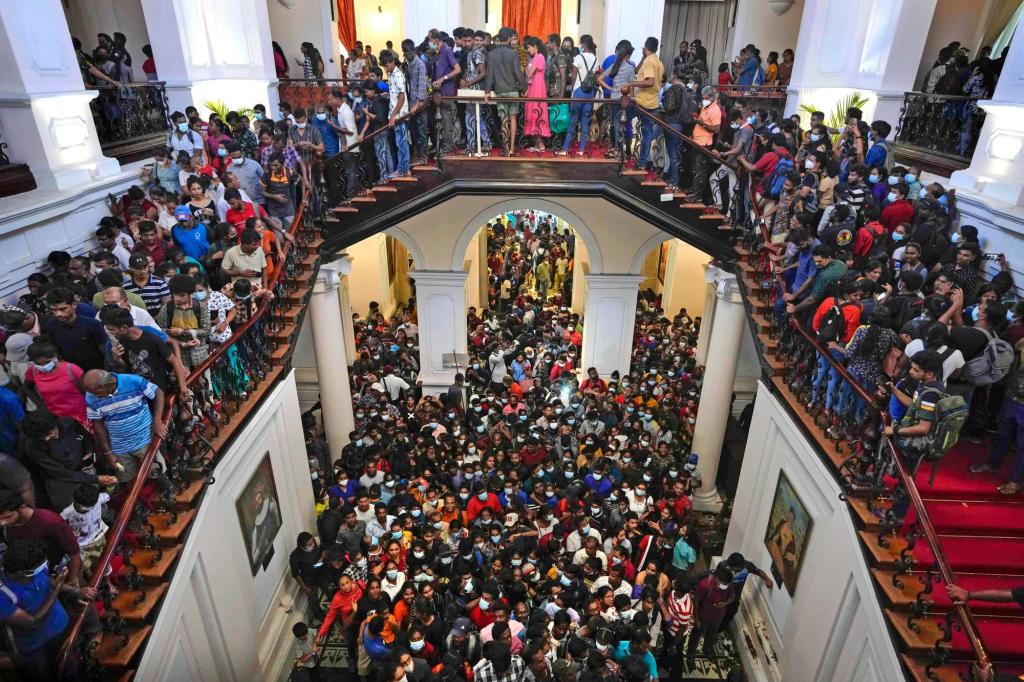 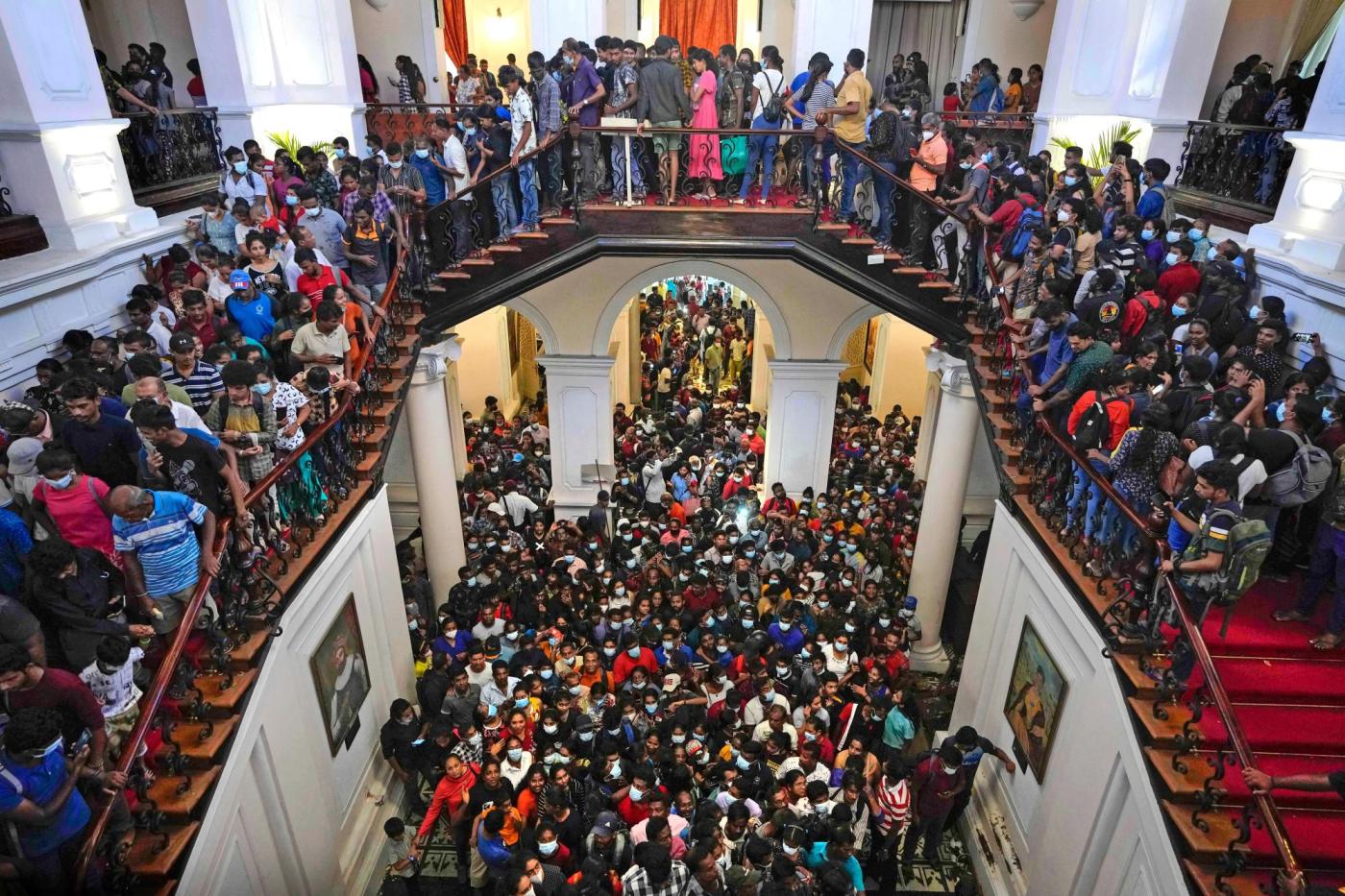 COLOMBO, Sri Lanka (AP) — Sri Lanka was in a political vacuum for a second day Monday with opposition leaders yet to agree on who should replace its roundly rejected leaders, whose residences are occupied by protesters angry over the country’s deep economic woes.

Protesters remained in President Gotabaya Rajapaksa’s residence, his seaside office and the prime minister’s official home, which they stormed on Saturday demanding the two leaders step down. It marked the most dramatic day of protests during three months of a relentless crisis that has pushed many to the brink to despair amid acute shortages of fuel, food, medicine and other necessities.

The protesters, who come from all walks of life, vowed to stay put until the resignations of the leaders are official. Rajapaksa has said he will step down on Wednesday, according to the parliamentary speaker.

In a video statement Monday, the first since Saturday’s protests, Prime Minister Ranil Wickremesinghe reiterated that he will stay on until a new government is in place because he wants to work within the constitution.

“A government has to function according to the law. I am here to protect the constitution and through it fulfill the people’s demands. What we need today is an all-party government and we will take steps to establish that,” Wickremesinghe said.

He also explained the sequence of events that led to the burning of his private residence on Saturday. He said that angry protesters gathered around his house after a lawmaker, in what Wickremesinghe said was an inaccurate tweet, said that he had refused to resign at a meeting of parliamentary party leaders.

“Police baton charged and fired tear gas. The last option was to shoot. We did not shoot but they came and burnt the house,” he said.

“My biggest treasure was my library with 2,500 books,” Wickremesinghe said, adding it contained books written during the Portuguese and Dutch colonial period from the 16th and 19th centuries. There were old books written on Buddhism, those signed by leaders like former U.S. Secretary of State Henry Kissinger, historical paintings and Buddhist artifacts, which he had planned donating to his old school and a university after his death.

He said all but one painting had been salvaged.

Wickremesinghe said he took over as prime minister to salvage the economy, and it would take at least one year to complete the initial steps needed for a full recovery.

Also Monday, a group of nine Cabinet ministers announced they will quit immediately to make way for an all-party government, outgoing Justice Minister Wijayadasa Rajapakshe said. Wickremesinghe’s office said meanwhile that another group that met the prime minister decided to stay on until a new government is formed.

The president hasn’t been seen or heard publicly since Saturday and his location is unknown. But his office said Sunday that he ordered the immediate distribution of a cooking gas consignment to the public, suggesting that he was still at work.

Opposition party leaders have been in discussion to form an alternative unity government, an urgent requirement of a bankrupt nation to continue discussions with the International Monetary Fund for a bailout program.

Lawmaker Udaya Gammanpila said the main opposition United People’s Front and lawmakers who have defected Rajapaksa’s ruling coalition have had discussions and agreed to work together. Main opposition leader Sajith Premadasa and Dullas Alahapperuma, who was a minister under Rajapaksa, have been proposed to take over as president and prime minister and have been asked to decide on how to share the positions before a meeting with the parliamentary speaker later Monday.

“We can’t be in an anarchical condition. We have to somehow reach a consensus today,” Gammanpila said.

Opposition parties are also concerned over military leaders making statements about public security in the absence of a civil administration.

“A civil administration is the need, not the military in a democratic country,” Makalanda said.

They said that Wickremesinghe should promptly resign and allow Speaker Mahinda Yapa Abeywardena to be acting president — the next in line according to the constitution. The Bar Association of Sri Lanka, the country’s main lawyers’ body, has also endorsed that position.

Rajapaksa appointed Wickremesinghe as prime minister in May in an effort to solve the shortages and start economic recovery. But delays in alleviating the shortages of basic supplies has turned public anger against him with protesters accusing him of protecting the president.

Wickremesinghe had been part of crucial talks with the IMF for a bailout program and with the World Food Program to prepare for a predicted food crisis. The government must submit a plan on debt sustainability to the IMF in August before reaching an agreement.

Sri Lanka is relying on aid from India and other nations as leaders try to negotiate a bailout with the IMF. Wickremesinghe said recently that negotiations with the IMF were complex because Sri Lanka was now a bankrupt state.

Sri Lanka announced in April that it was suspending repayment of foreign loans due to a foreign currency shortage. Its total foreign debt amounts to $51 billion, of which it must repay $28 billion by the end of 2027.

Months of demonstrations have all but dismantled the Rajapaksa political dynasty, which has ruled Sri Lanka for most of the past two decades but is accused by protesters of mismanagement and corruption.