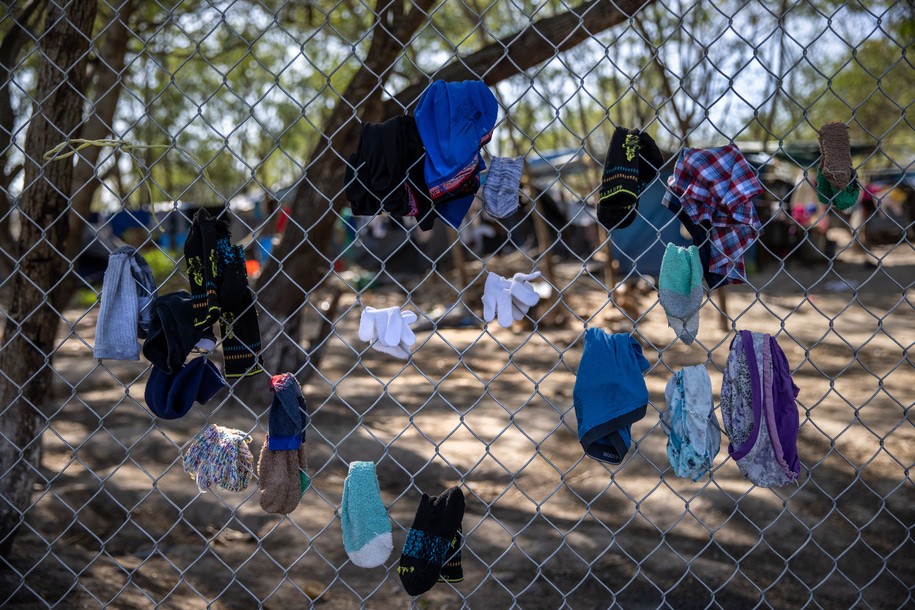 Following a visit to the Matamoros camp early last year, Illinois Rep. Chuy García had urged the American public to “not forget” the then-2,500 asylum-seekers who were stranded there are a result of U.S. policy. “I talked with many people in the camp,” García wrote in a post published on the website Medium. “They told me harrowing stories of suffering. They escaped violence, and yet our government’s policy is further endangering them.”

García described no access to running water, “a primitive sewage system,” no official U.S. government presence, “and very little official Mexican government presence.” The lack of that presence no doubt aided the thugs profiting off of official U.S. policy by targeting vulnerable families. In a report last year, Human Rights First documented over 800 instances of violence against returned asylum-seekers, including kidnapping and attempted kidnapping.

“I hear people speaking Spanish, but I also hear indigenous languages,” García continued. “It seems unreal—I wish it were. This is a refugee camp—a refugee camp President Trump created.”

The novel coronavirus pandemic hit the camp just months after García’s visit, but efforts from international NGO Global Response Management and volunteers helped to quickly contain the outbreak and stop it from reaching disastrous levels. Slate reported in August that only about 50 asylum-seekers had tested positive. That fact sure hasn’t stopped Republican legislators from spreading gross lies about asylum-seekers. Nevertheless, advocates said the infections at the camp didn’t have to happen at all.

“This was avoidable,” Refugees International tweeted during the summer, saying that as it “and public health experts suggested at the start of the pandemic, asylum seekers in the Remain in Mexico program could have been paroled safely to family members in the United States.” The Biden administration has begun to do just that, though the vast majority of 25,000 asylum-seekers subject to Remain in Mexico have not yet been able to enter the U.S. “As of Friday, some 1,127 people in the MPP program across Mexico have been permitted to enter the United States since Biden rescinded the policy last month,” Reuters reported.

Advocated are also urging that the Biden administration give the thousands of asylum-seekers who were unjustly denied a chance at asylum under the policy by the previous administration a second chance. One recent report from Human Rights Watch found some asylum-seekers missed their court dates because they’d been kidnapped, and if they don’t make their dates, they lose their cases. “Others were bused south by the Mexican government, leaving them thousands of miles from their hearing locations,” the report said.

Among the nearly 900 people who were still at the camp when the Biden administration began to allow in some asylum-seekers last month was Enda Marisol Rivera and her 10-year-old son. The Associated Press reported that when the family’s propane gas stove froze during the recent winter storm, the two have been trying to stay warm under piles of blankets. “Despite the added hardship from the Arctic blast that hit Texas and northern Mexico, Rivera was in good spirits and closely watching the news,” the report said.

Rivera held out hope her name would be called soon so she could travel to L.A., where she has relatives she can shelter with. “We have faith in God that we will be allowed in,” she said in the report. “We have already spent enough time here.”