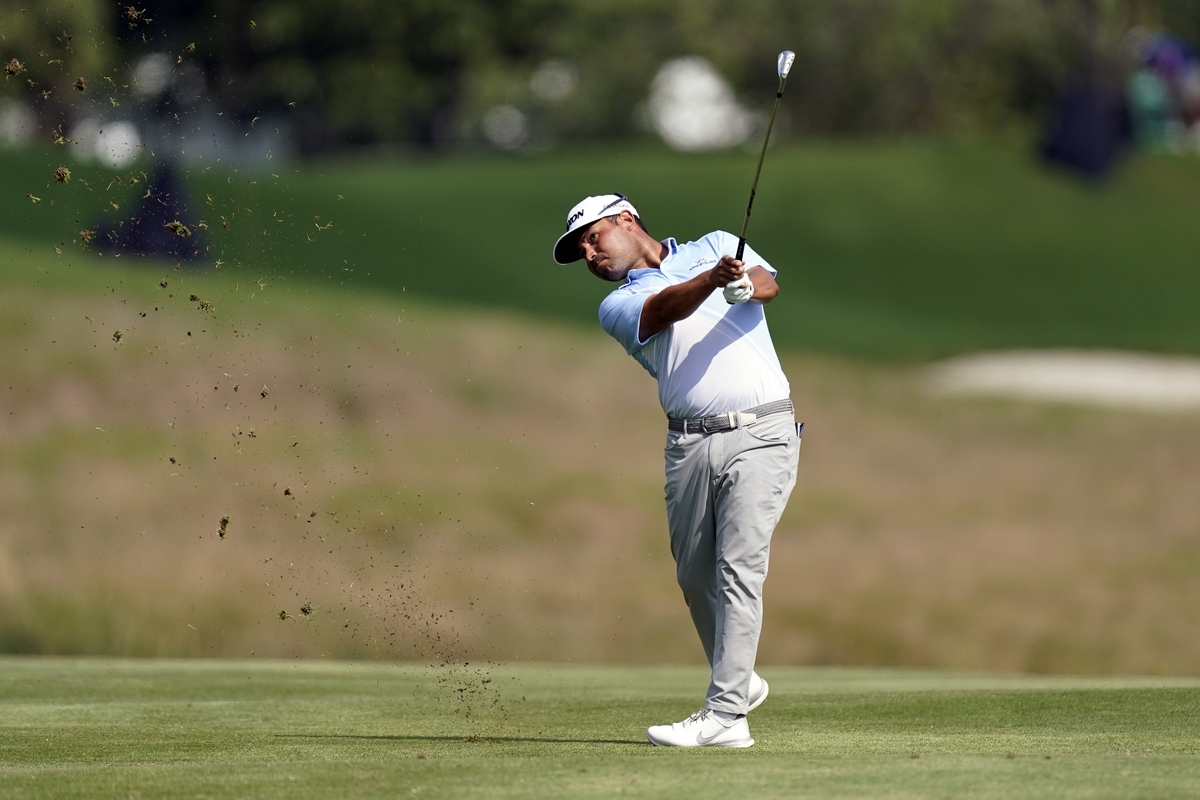 J.J. Spaun hits from the second fairway during the second round of the St. Jude Championship golf tournament Friday, Aug. 12, 2022, in Memphis, Tenn.

MEMPHIS, Tenn. — J.J. Spaun hopes he’s only getting started on the road to the FedEx Cup finale. Scottie Scheffler, Rory McIlroy and Jordan Spieth will have to wait another week.

As for Jason Day, his season is over.

Spaun made a late birdie for a 3-under 67 to take a one-shot lead Friday in the FedEx St. Jude Championship, the opening event in the PGA Tour postseason that no longer has three of its biggest stars for the weekend at the TPC Southwind.

Scheffler, the Masters champion and No. 1 player for the last five months, never quite recovered from what he could only describe as an “out-of-body experience” with his putting in the first round. He had birdie chances on two of the last three holes he couldn’t convert and his 68 was one shot short of making the weekend.

“Obviously, it’s really frustrating coming into the playoffs,” Scheffler said. “I was practicing really hard at home, actually playing really good, and I showed up and had the worst putting day ever. Golf smacks you in the face sometimes.”

McIlroy went from rough to gallery to fringe to bogey on his last hole for a 69 for only his second missed cut of the year. Spieth’s hopes of playing the weekend ended with a tee shot into the water on the par-3 14th that led to a 74.

At least they get to play next week in the BMW Championship, being high enough in the standings not to lose too much sleep over it.

Day opened with a 65 and was hopeful of a big finish to advance into the top 70 who made it to the next playoff event. Instead, the former world No. 1 dropped five shots over the last eight holes, shot 74 and missed the cut by one shot.

Day was among 31 players who started outside the top 70 in the FedEx Cup and missed the cut, meaning their season is over.

Rickie Fowler, who came in at No. 125, ended the back nine (double bogey) and front nine (bogey) poorly and shot 71. He was tied for 33rd, around for two more days but needing to contend to advance.

He was one shot ahead of Sepp Straka, who birdied his last three holes for a 66, and Troy Merritt, who had a 65. Merritt started at No. 64 in the standings, so this was just what he needed to make sure he would be moving on.

With a clear sky, hot sun and a little more wind, Spaun was as proud of his 67 on Friday as his 64 the day before. Mostly, he feels his game his coming around after going into a lull following his first PGA Tour title at the Valero Texas Open in early April.

“It’s so hard to be consistently good at the highest level. Some guys that do it like that, like Tiger and McIlroy and all those guys. It’s just insane how good they are for so long,” Spaun said. “I did it for a few months and then kind of fell off, but here I am kind of making my way back.”

Straka knows the feeling. He had not made it to the weekend since the Memorial in early June. And then he opened with rounds of 64-66.

“Hadn’t played great coming into this week. Missed a bunch of cuts coming in,” Straka said (in his case, “a bunch” would be six in a row). “But that’s golf. You’re going to have the ebbs and flows and just kind go with it.”

And off he went, especially at the end, when he finished with three straight birdies to get to 10 under.

Tony Finau, coming off two straight victories, had his 11th consecutive round at 68 or lower dating to the final round of the British Open. His 68 on Friday left him three behind.

Spaun didn’t feel as though he had much of a lead — one shot, not to mention 15 players within four shots of the lead and 36 holes still to play.

“It’s anyone’s weekend, and it’s going to mine,” he said playfully.

The first part for so many players was getting to the weekend, and two players who seized on the opportunity were Ryan Palmer and Lucas Glover.