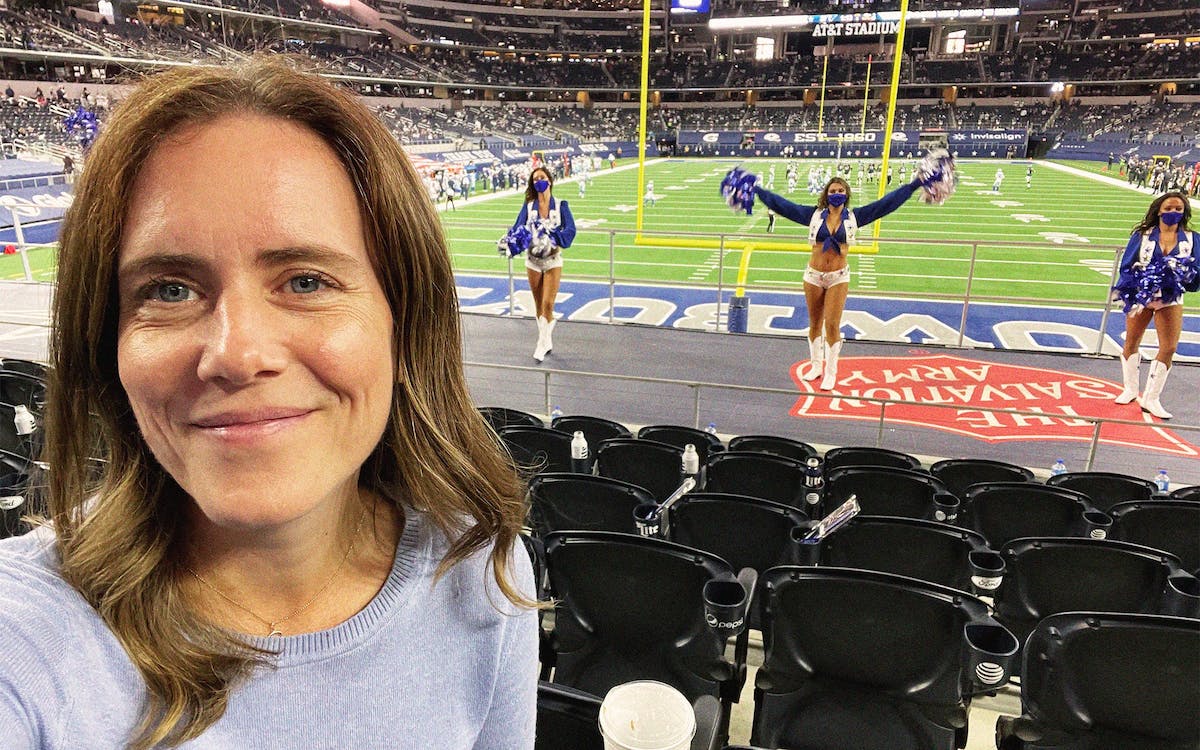 The author of this month’s cover story, Sarah Hepola, describes her mother, a therapist in Dallas, as “earthy”—someone who favors plain clothing and clogs, and seldom wears makeup. Sarah, on the other hand, took to flashy outfits as a young girl, especially a shiny blue leotard. Sarah also idolized the Dallas Cowboys Cheerleaders, who in the late seventies were beginning to appear on posters around the city. Her mom nicknamed her Sparkle Plenty, after the glamorous young girl in the old Dick Tracy comic strip. “Mom tried to raise gender-neutral children,” Sarah says, “but she got two gender clichés”—including a son who served as an officer on a nuclear submarine and today ranks as a captain in the Navy Reserve.

As a teenager, Sarah shifted into what she self-mockingly calls “the contemplative, dour, writerly stage of my life.” After graduating from the University of Texas at Austin, she developed her skills as a journalist and essayist in Texas and New York and wrote an acclaimed memoir, Blackout, about her struggles with alcoholism.

Sarah considers herself a feminist, but she never stopped admiring the beauty and presence and athleticism of the Cowboys cheerleaders. “The seeds of my childhood fascination never left me,” she says. Though images of the cheerleaders were ubiquitous, “nobody really knew anything meaningful about them. Who were they as individuals? What were their backgrounds? How did this whole squad get started? What made it a global phenomenon? How did they start out as eye candy for male sports fans, and then become better known as a talented dance squad with a huge corps of female fans, based on their reality TV show?”

A few years ago, with the cheerleaders’ fiftieth anniversary approaching, Sarah began discussing these questions with J. K. Nickell, our features editor. “When she first mentioned this story, I had little interest,” recalls J.K., who, like Sarah, resides in Dallas. The two had worked closely together on earlier projects, including Sarah’s insightful cover story on inspirational author and speaker Brené Brown, which we published in June 2020. As Sarah began digging into the cheerleaders’ stories, J.K. reports, her enthusiasm proved infectious. “The most fun part about working with Sarah,” he says, “is that she always tells me something surprising. She’s always going against the grain. You never know where her brain is going. She writes with such honesty and vulnerability, and she brings that out in the people she interviews.”

Ultimately, J.K. felt the cheerleaders’ tale was so sweeping that it should be told first in an eight-episode podcast, which Sarah reported and wrote and narrated, with expert help from J.K. as well as from our editor of new story platforms Megan Creydt, multimedia producer Brian Standefer, and podcast producer Patrick Michels. When Sarah first reached out to current and former members of the cheerleading squad, she says, “many of them assumed we were doing a video” for which they would have to worry about their appearance. “When I explained that the podcast would be all about their voices and their stories, they visibly relaxed” and spoke more frankly than they would have otherwise.

That podcast, America’s Girls, proved quite popular, earning critical acclaim and attracting 1.4 million downloads since we launched it in December. (You can find it on our website, under “Podcasts.”) But different members of our audience enjoy storytelling in different ways. Some prefer listening while they drive or exercise. Some would rather read on their phones or laptops, and some savor stories in print accompanied by engaging photos and illustrations. Sarah embraced the challenge of telling the cheerleaders’ saga across very different mediums and says she’s “grateful for the opportunity to finally meet and get to know these remarkable women” after having “grown up in their long, sparkly shadow.”

This article originally appeared in the September 2022 issue of Texas Monthly with the headline “Sparkle Plenty.” Subscribe today.