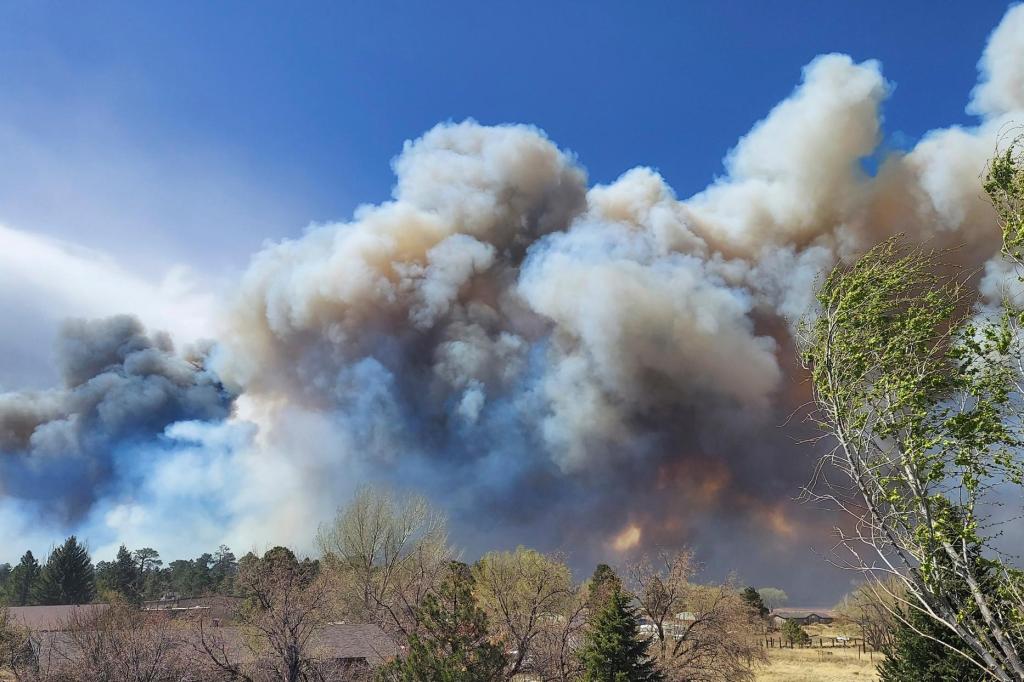 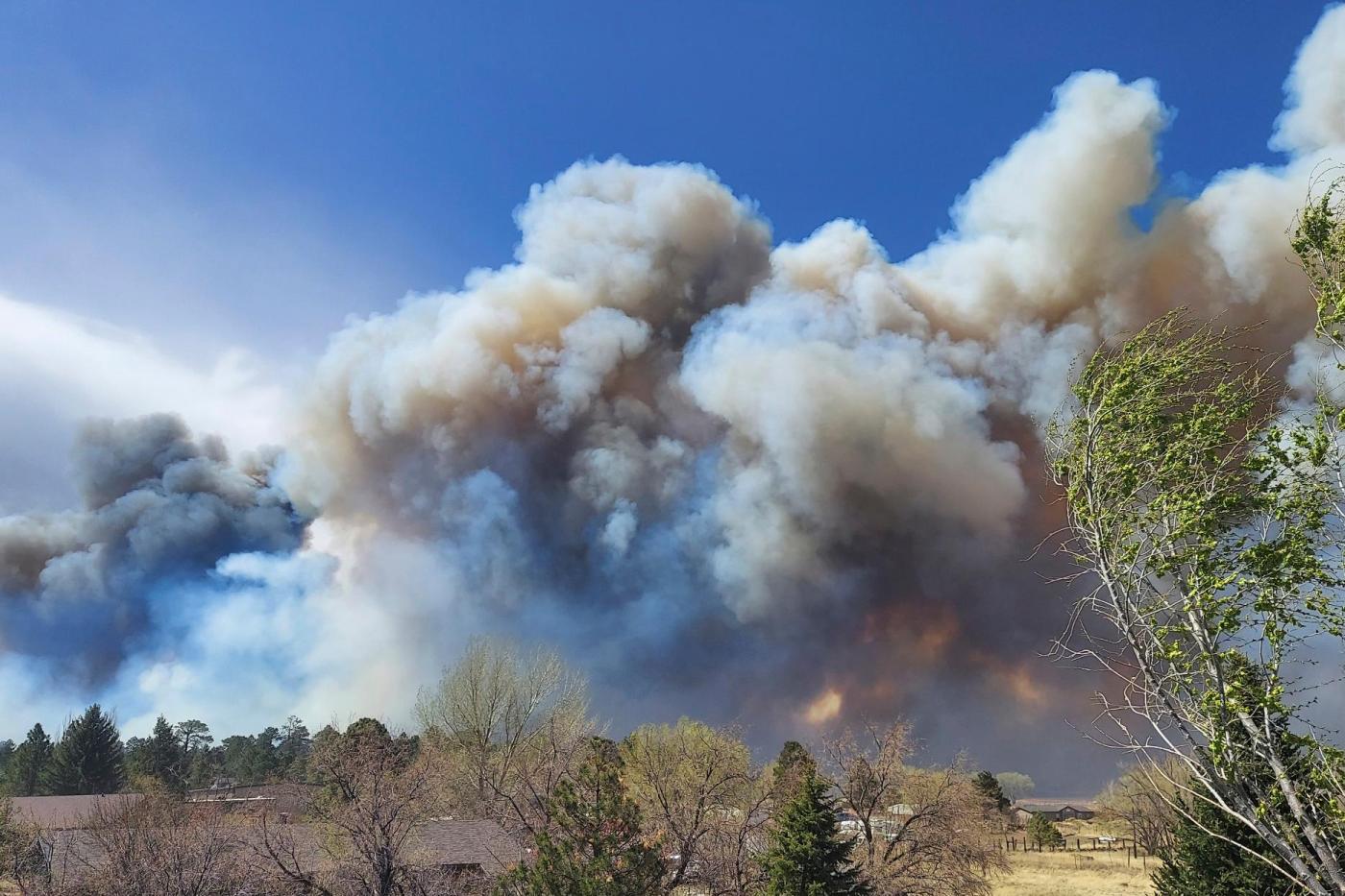 FLAGSTAFF, Ariz. (AP) — An Arizona wildfire more than tripled in size as relentless winds pushed the flames through neighborhoods on the outskirts of a college and tourist town, keeping hundreds of residents away from their homes and destroying more than two dozen structures.

“This is a heads-up for everywhere else in the state,” said fire information officer Dick Fleishman. “If you have dry grass up next to your house, it’s time to get that cleaned up.”

Fire managers are contending with tight resources as wildfires burn around the Southwest. The U.S. has 16 top-level national fire management teams, and four of those are dedicated to blazes in Arizona and New Mexico — something Fleishman said is rare this early in the wildfire season.

Hundreds of people have been evacuated because of the wildfires north of Flagstaff and south of Prescott in Arizona.

In New Mexico, the Mora County Sheriff’s Office issued mandatory evacuations for more residents as winds fueled a blaze that has burned more than 14 square miles (36 square kilometers) since Sunday. Meanwhile, another fire was sparked Wednesday afternoon in a wooded area along the Rio Grande south of Albuquerque.

Red flag warnings were on tap across New Mexico on Wednesday and through the rest of the week. Winds were expected to be lighter Wednesday in Arizona but will strengthen Thursday and Friday, said Mark Stubblefield of the National Weather Service.

In Colorado, new wildfires prompted evacuations in Monte Vista, a city of about 4,150 people in the southern part of the state, as well as near Longmont. Flames and billowing smoke could be seen on a street surrounded by buildings as fire crews responded, according to video from a reporter for the Alamosa Citizen.

The number of acres burned in the U.S. so far this year is about 30% above the 10-year average — a figure that has gone up from 20% just earlier this month as the fire danger shifted from the southern U.S. to the Southwest, where above-average temperatures and below-average precipitation have combined with spring winds to elevate the chances for more catastrophic fires.

On the outskirts of Flagstaff where tourists and locals revel in hiking and horseback riding trails, camping spots, and the vast expanse of cinder fields for off-road vehicle use, flames soared as high as 100 feet (30 meters). Popular national monuments including Sunset Crater Volcano and Wupatki were closed because of the wildfire.

“It’s just a unique community and we’re fortunate to live here,” said Jon Stoner, who evacuated his home Tuesday. “We feel very lucky with the views we have and the surrounding forest.”

Some residents’ homes were burned to the ground, though Coconino County hasn’t said exactly how many. Officials said Tuesday evening that 766 homes and 1,000 animals had been evacuated, and about 250 structures remained threatened.

One man who reportedly was trapped in his home by the flames was able to get out, Coconino County sheriff’s spokesman Jon Paxton said Wednesday.

Firefighters were expected to move through neighborhoods Wednesday to cool down any smoldering spots and assess what’s most at risk. Paxton said no injuries or deaths have been reported.

The wildfire’s size has surpassed another that burned in the same area in 2010. Resident Kathy Vollmer said her husband stayed behind then, spraying down the house they’ve lived in since 1999 to protect it. But this time was different, she said, describing a wall of fire in her backyard.

The couple grabbed their three dogs but left a couple of cats behind.

“We just hope they are going to be OK,” she said.

U.S. 89, the main route between Flagstaff and far northern Arizona, and communities on the Navajo Nation, remained closed.

The fire started Sunday afternoon northeast of Flagstaff and its cause is under investigation. The county declared an emergency after the wildfire ballooned from 100 acres (40 hectares) Tuesday morning to over 9 square miles (23 square kilometers) by evening. It was estimated at more than 30 square miles (77 square kilometers) Wednesday afternoon.

Fire crews have yet to corral any part of it.

The surrounding mountains were shrouded in smoke as ash rained down from the sky. Residents reported hearing propane tanks bursting amid the flames.

“It was very surreal,” said Ali Taranto, who helped a woman next door evacuate.

Early Tuesday, Lisa Wells saw a puff of smoke outside her window. Before long, the smoke blackened, the wind gained strength and entire trees were being consumed by flames.

“I knew that was not good,” she said. “The fire was moving fast.”

In what felt like seconds, her family moved from being ready to go to fleeing. Wells grabbed medication, and the family got themselves, their alpacas, horses and dogs to safety.

They drove off and pulled over in the parking lot of a tavern to process what happened — where she was standing Wednesday, her blue heeler Bandit at the end of a leash.

“It was a miracle that people got out because we had so little time,” Wells said.

The house they bought 15 years ago with a barn and guest quarters, the quirky one that had horizontal studs held together by tongue-and-groove boards, wasn’t standing for long. Winds shifted and pushed flames over an open field and onto the house that Wells’ husband, Bill, had been remodeling a little at a time.

The blaze destroyed the main house and the barn. The only thing they’ve been able to recover from the ashes was a gray porcelain dove that Bill Wells gave his wife as a gift. It was part of a set of collectibles.

“It was the only thing we found so far, but it means a lot, and we will keep it,” Lisa Wells said. “I love birds.”

The family’s real-life birds and goats didn’t survive the fire that left a mosaic of ashes and blackened debris in the neighborhood.

“We had to leave some of the animals there,” she said.

She thought, too, about the decades of photographs she left behind and the baby grand piano that was built in 1890 that her grandmother, who was an opera singer, gave her. Those are gone, too.

“It’s just stuff, you realize it’s all just stuff and what’s important is your family,” she said. “We think day to day, we know it will all work out.”

For now, they are staying in a hotel where Bandit and siblings, Lily and Bear, who are hybrid German shepherds, also are welcome.

They still love Flagstaff, the city of 70,000 nestled in the largest contiguous Ponderosa pine forest in the U.S., but she worries about how dry the landscape has become.

“We will rebuild, we will. This time with cinderblock,” she said with a hearty laugh. “Probably not going to use wood.”

Neighbors offered their homes to evacuees and their backyards to animals that included sheep, goats and horses. A shelter was set up at a local middle school where a community meeting was planned Wednesday evening.

Elsewhere in Arizona, a wildfire burned 2.5 square miles (6.5 square kilometers) of brush and timber in the forest about 10 miles (16 kilometers) south of Prescott. Several small communities that included summer homes and hunting cabins were evacuated.