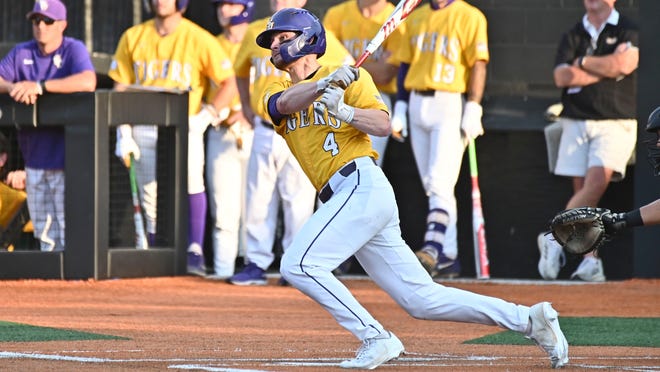 HATTIESBURG — Its greatest strength neutralized, Southern Miss baseball played a game it wasn’t designed to win in a must-win contest against LSU.

Playing a fourth game of the Hattiesburg Regional and unable to rely on any of the three standout weekend starters who brought his team to this point, Southern Miss coach Scott Berry mixed and matched his way through nine innings.

After a poor showing in a narrow afternoon win against Kennesaw State earlier in the day, the Southern Miss lineup woke up to produce eight runs, and the Golden Eagles overcame the absence of their typical starting-pitching dominance.

Most of that production came in bunches, with the Golden Eagles scoring multiple runs in the second, third and sixth innings. The only home run they slugged came off the bat of Carson Paetow in the eighth.

The Golden Eagles enacted a patient approach at the plate to apply pressure to a strung-out LSU pitching staff.

They were rewarded for it in the sixth inning, when things got a little bit nonsensical.

After loading the bases with two walks and a single, Southern Miss took its first lead of the game on an Eric Reyzelman wild pitch.

Dustin Dickerson then ripped an RBI single to double the advantage, and Rodrigo Montenegro crossed the plate when Reyzelman balked.

Once starter Matthew Adams left the game, having allowed three runs in two innings, it became clear that Berry and the Golden Eagles would need an arm out of the bullpen to offer some length.

That name turned out to be sophomore lefthander Justin Storm.

Storm, who never had contributed an outing longer than 1⅔ innings in his two-year career, more than doubled that mark on Sunday.

Dustin Dickerson turned in an excellent game for Southern Miss.

He finished 2-for-5 with a double, RBI and a run scored, but his biggest flash came on defense.

In the top of the seventh inning, Dickerson fell over backward near the sidewall in foul territory to reel in a tricky fly ball and provide Storm with the defensive support he needed.