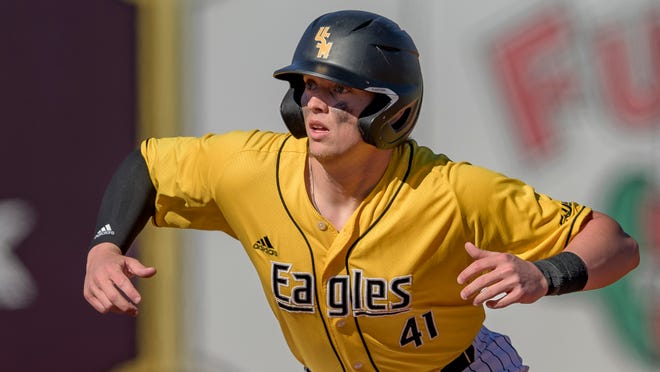 HATTIESBURG — Southern Miss baseball had three outs to get to advance to the Hattiesburg Regional and a four-run cushion with which to work.

Instead, the Golden Eagles are staring down an elimination game with Kennesaw State.

USM blew a four-run lead in the bottom of the ninth inning, and Josh Pearson’s chopper up the middle completed the collapse in the 10th.

Southern Miss will play its elimination game against the Owls on Sunday (1 p.m., ESPN+).

Catch Up On The Action:Southern Miss baseball vs LSU in Hattiesburg Regional: Live score updates

In coming back from a seven-run deficit against Kennesaw State on Friday, the Tigers showed that they’re never out of any game.

Still, it seemed unthinkable that USM might find itself on the losing end of Saturday’s clash when it entered the ninth inning up four runs with closer Landon Harper on the mound.

Harper surrendered a solo shot to Dylan Crews and a two-run bomb to Cade Doughty. Then Tre’ Morgan reached on a hit-by-pitch. Pinch runner Drew Bianco stole second and scored the tying run on a two-out single by Jordan Thomspon with Garrett Ramsey on the mound.

The game went to extras, and the Tigers quickly delivered the decisive blow in the 10th.

Southern Miss’ late collapse undid an outstanding outing from starter Hurston Waldrep, who got the ball instead of typical Saturday starter Hunter Riggins.

Waldrep needed 31 pitches to escape the first inning, surrendering one run and struggling with his control. LSU got to Waldrep again to start the second, when Tyler McManus took him deep to right-center.

But the sophomore found his composure from that point on. He dialed in on the strike zone with his breaking pitches and generated swings and misses in bunches with his changeup.

Waldrep struck out six straight at one point, retiring 11 consecutive batters during one stretch that began in the third inning.

Like Tanner Hall on Friday, he became more efficient as the game went on, too. Struggling early with his command, he pitched into the seventh inning, allowing just two runs, five hits and two walks.

Despite entering the game with a sputtering offense, the Golden Eagles matched the power-hitting Tigers swing for swing.

LSU slugged three homers, but Southern Miss provided a trio of its own

Will McGillis got the power party started in the second with his two-run shot to left field — his 16th homer of the year.

Leadoff batter Carson Paetow followed with a long solo home run to right in the fifth, and Christopher Sargent cleared the trees in left field with his 21st bomb of the season to plate USM’s sixth run in the eighth inning.