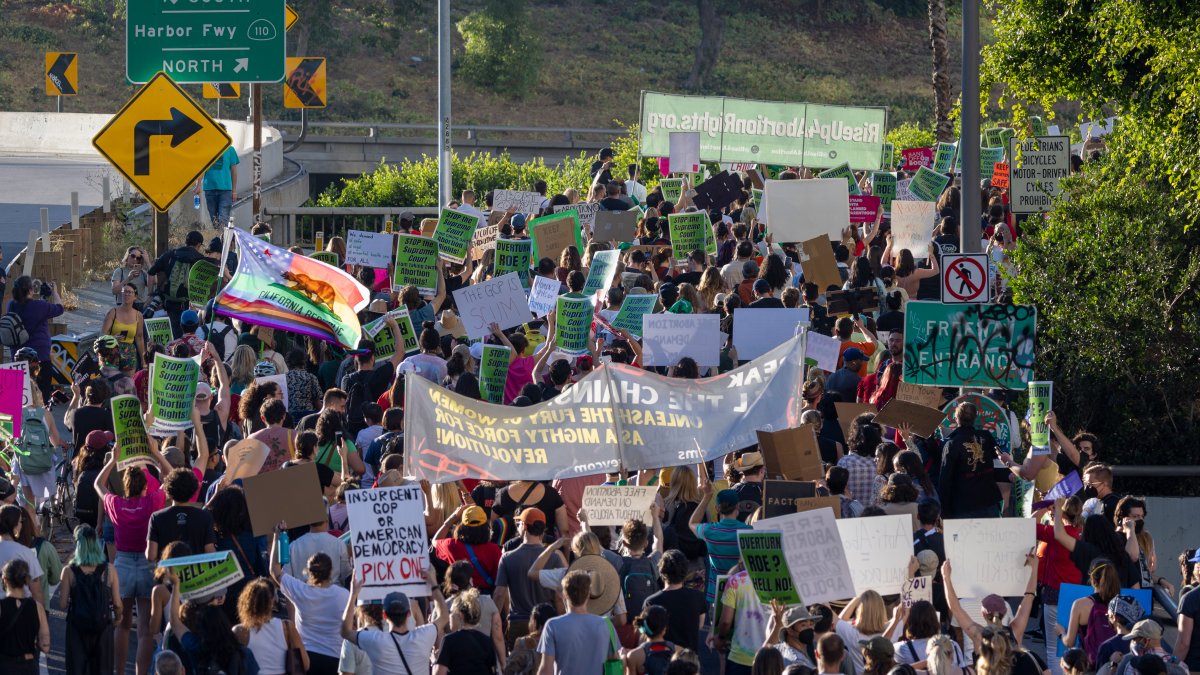 One day after the Supreme Court ended constitutional protections for abortion that have been in place for nearly 50 years, demonstrators are set to continue a series of protests through Downtown Los Angeles to voice fear, grief and outrage at the decision.

The “We Won’t Go Back” protest started at 10 a.m. Saturday in Grand Park, hosted by a coalition of local activists.

The ruling from the highest court in the United States puts the ability to regulate abortion access back into the hands of state legislatures.

Roughly half of U.S. states are expected to ban abortion as a result, leaving approximately 33.6 million women without access to safe abortions.

California is vowing to be an abortion sanctuary and so are many companies across the nation. Hetty Chang reports for the NBC4 News at 11 p.m. on June 24, 2022.

A proposed amendment to the California Constitution would explicitly ban the state from denying or interfering with abortions or contraceptives. That measure cleared two legislative committees in a single day last week.

Governors in California, Washington and Oregon also issued a Multi-State Commitment to Reproductive Freedom on Friday, vowing to protect reproductive rights and help the women traveling to the West Coast seeking abortions.

They also vowed to protect against judicial and local law enforcement collaboration with out-of-state investigations, inquiries and arrests regarding abortions performed in their states.

“The impact on woman in California is negligible because California protects reproductive rights through its constitution and through statutes,” said Cary Franklin, UCLA faculty director of the Center on Reproductive Health, Law and Policy. “Abortions will proceed in California. California women are fully protected.”

“That is not true in every state.”

Protestors took to the streets all over the country on Friday, from the steps of the Supreme Court to downtown Los Angeles, holding signs and banners to show their opinion on the ruling.

During the demonstrations, some anti-abortion rights activists took time to celebrate the ruling.

At one point, the crowd of thousands in LA marched onto the northbound 110 Freeway, temporarily affecting traffic.

Later on Friday night, after 9 p.m., another crowd of protestors gathered. Someone there launched a firework into the crowd, causing alarm and prompting police to declare an unlawful assembly.

Other rallies are planned in Southern California later on Saturday.