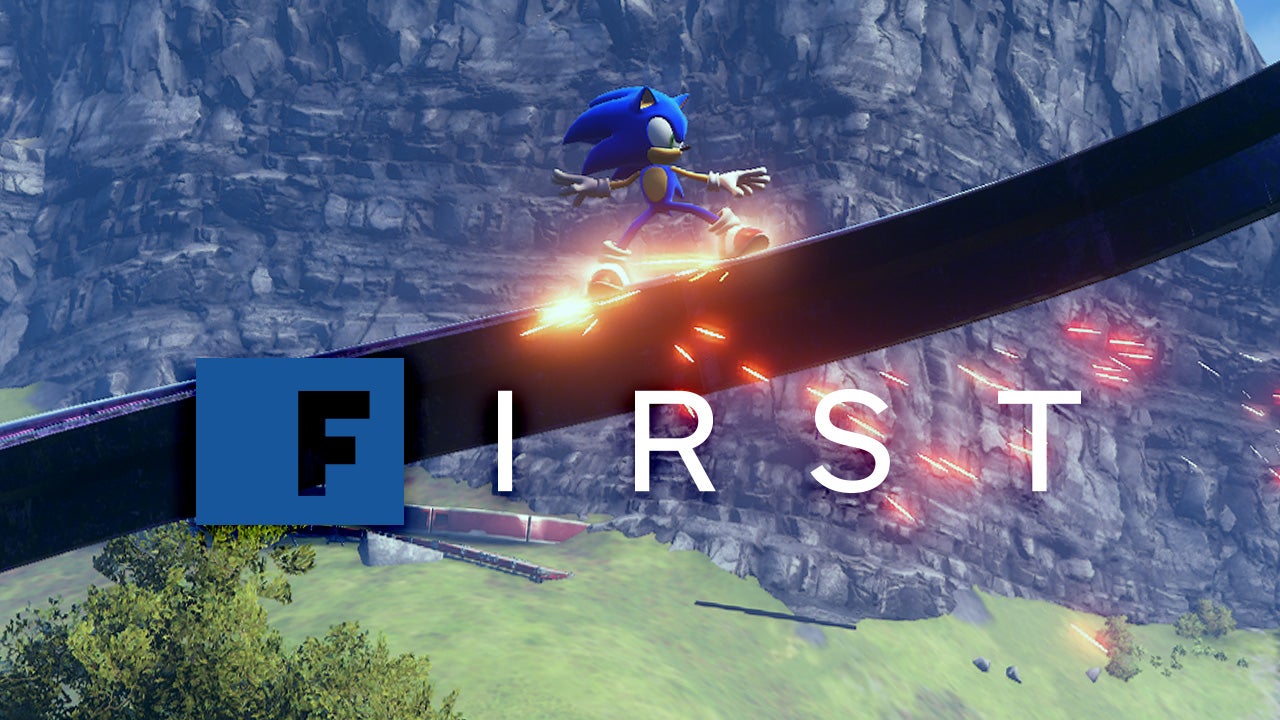 Sonic’s done a lot in 30 years. He’s been a pioneer of the high-speed 2D platformer, an Olympic athlete, a respectable kart racing enthusiast, a fighter, a TV star, and a Hollywood blockbuster movie star as well. But he’s never done open world, and Sonic Frontiers fixes to change that. I was fortunate enough to be one of the first people outside of Sonic Team to go hands-on with Sonic Frontiers, and let me just say, if you’re worried about how the blue blur will fare in this unfamiliar genre, I think Crush 40 put it best:: “Open your heart, it’s gonna be alright.”

The first thing that struck me about Sonic Frontiers was how uniquely somber and serene it was right from the outset. After flying into a wormhole with Tails and Amy, Sonic finds himself separated from his friends and all alone on an isolated island, with nothing but an AI voice guiding him to collect the Chaos Emeralds. There’s no one for Sonic to bounce quips off of, no energetic Crush 40 soundtrack, just wide-open fields as far as the eye can see. There’s an air of mystery in Sonic Frontiers, and it’s a vibe that’s driven home even further by the beautiful yet minimalist piano melodies that accompany Sonic as he explores the island.

All of this is a very intentional choice. I asked Sonic Team Head Takashi Iizuka to describe how the tone of Sonic Frontiers differs from previous Sonic games, and he said, “Past games in the Sonic series have taken different tones depending on their story and themes. This time, these mysterious islands are the game’s major setting. That’s why our artists have worked hard to create a mysterious mood.”

Of course, the big new change in Sonic Frontiers is the shift from purely linear levels to a huge open world where Sonic can run freely in any direction, but Sonic Team doesn’t like to use the term “Open World” to describe Sonic Frontiers’ gameplay, instead referring to its style as being “Open Zone.”

“Open world games like Zelda or other AAA games fundamentally have RPG or adventure worlds,” said Iizuka-san. “For Sonic, the core here is a 3D action game. Our basic idea was to have that take place in an open space. What sets Sonic Frontiers apart is this different approach to an open game world.”.

Having played Sonic Frontiers for about four hours, it’s easy to see what Iizuka-san means. Sonic Frontiers’ open zone design is very different from any other open world I’ve ever played — it’s a giant playground. Every few feet there’s a bumper spring that bounces you like a pinball between five other bumpers before putting you on one of the many grindable rail tracks; or a speed ramp that sets you on a completely different path leading to some other collectible or reward; or a line of rings that you can light speed dash into. Essentially, they’ve taken that core appeal of every Sonic level having multiple paths that eventually loop back around to the main one, and applied that to these giant non-linear open zones.

Sonic Frontier’s open zone design is very different from any other open world I’ve ever played.

One thing that has to be noted is that very few of these elements are built into the environmental design. Meaning that rails, platforms, boost rings, and so on are just… inexplicably floating in the air all around, which isn’t totally unusual for a Sonic game, but it feels especially jarring in Frontiers in particular, because of the frequent and sudden pop-in of these objects and the otherwise very naturalistic art style. Of course, it’s worth emphasizing that this gameplay and the version I played were from an early build, but this is definitely an area that I’d hope to see improvement in the final version.

Beyond that, there are also a wide variety of puzzles and challenges that are littered throughout the zone, and completing them is how you uncover sections of your map. Most of these are very simple, requiring you to orient a statue the correct way, quickly hop back and forth between colored tiles, or use Sonic’s new Cyloop ability to draw circles around certain objects in the environment to interact with them. The best ones though are races against the clock where you have to get from point A to point B in a limited amount of time. The openness of Frontiers’ level design makes straightforward races like these a ton of fun, because you have to try and improvise a path to the end that might not be immediately obvious.

There are some exceptions, but combat in traditional Sonic games generally isn’t a thing that goes much deeper than jumping, rolling, or using a homing attack into enemies at the right time. That changes in Sonic Frontiers’, which now has you fighting all sorts of wandering enemies and minibosses using an all-new array of incredibly flashy attacks. It’s not all style and no substance though. Sonic is able to quickly dodge using the bumper buttons on the gamepad, and by pressing them together, he can even parry attacks with the right timing. His homing attack also feels much more powerful, landing with a ton of impact, and keeping Sonic stuck to his enemy, allowing for a flurry of follow-up strikes.

One of the things that I really appreciated about the combat from what I played is that there are usually multiple ways to deal with specific enemies. One enemy has an impenetrable shell that he can expand into spinning blades and throw at you. One way to deal with him is to just carefully time your homing attacks so you don’t get hit by blades; but the window to damage him is small. To increase that window, you can either parry the blades and knock them away right before they hit you, or you can even use Sonic’s Cyloop to encircle the enemy, which will cause the shell to go flying upwards.

Defeating these enemies will reward you with EXP that you can use to purchase new skills from a skill tree, which gives Sonic Frontiers a really nice feeling of power progression, even in just the relatively short amount of time that I played. Some of the later skills you can get are just unbelievably cool (though I won’t spoil them here), and it’s super satisfying to see Sonic Team experiment with different ways that Sonic can attack enemies beyond just spins, jumps, and bumps.

In addition to these smaller enemies, there are also a handful of enormous world bosses that I had to contend with. These are near Shadow of the Colossus-esque in their scale, with one in particular against a beast named Asura, requiring Sonic to bait the titan to slam the ground, and then boost up its arm in order to reach the weak spots on its head. It’s an ambitious boss battle – far beyond anything I’ve seen in the Sonic series to date – but it’s also the part of the game that needs the most work. Far too often I’d fly off the boss’s arm without knowing why, or I’d get to the top and for some reason lack the momentum needed to actually reach the head.

Sonic must hunt down and defeat these bosses in order to collect portal gears, which open up portals that lead to bite-sized linear stages, done in the style of previous Sonic games, giving Sonic Frontiers a nice mix of both old and new styles. These classic levels each come with a handful of optional goals, like beating the level under a certain time, collecting all the red rings, and so on, with each goal rewarding you with a vault key, which are needed to unlock the coveted Chaos Emeralds.

Sonic Frontiers is an exciting new step forward for the Sonic series into uncharted territory, and based on my time with it, Sonic Team seems to have hit upon a winning formula. There’s certainly still work to be done before it’s released during the holiday season: There’s a lot of distracting pop-in, there’s a fair amount of bugs still left to be squashed, and the big boss fights could do with some tweaking, but ultimately my time with this early build answered the one question that I had on my mind: Will Sonic’s one-of-a-kind gameplay translate into an open world? The answer is a resounding “Absolutely”.