Some diplomatic observers say the lack of U.N. action to halt the war in Ukraine illustrates flaws embedded decades ago. 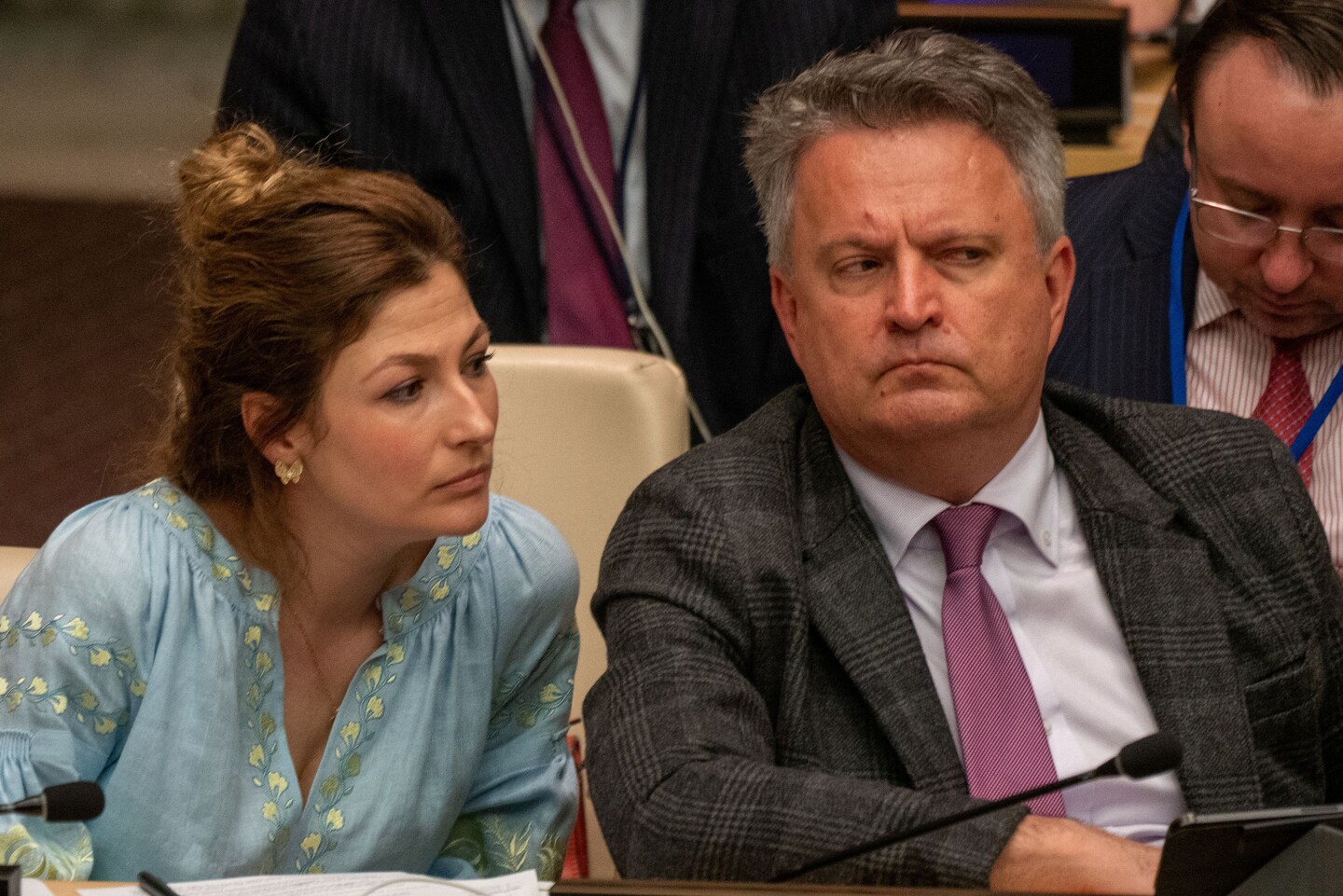 When Russian President Vladimir Putin announced his invasion of Ukraine in February, diplomats gathered at the U.N. Security Council responded by evoking lofty principles of global order and solemnly urging him to stand down.

Ukraine’s representative to the United Nations, Sergiy Kyslytsya, hurriedly revised remarks he had planned to make to the council. Glaring across the chamber at his Russian counterpart, Kyslytsya demanded the official, diplomat Vasily Nebenzya, phone his superiors in Moscow to appeal for an end to the offensive.

“There is no purgatory for war criminals,” he told Nebenzya with a withering look replayed repeatedly around the world. “They go straight to hell, ambassador.”

Three months after Russia’s assault began, thousands of Ukrainians have been killed and millions more forced from their homes. As Russian forces concentrate their fighting power on the country’s east, there are few signs that Putin will soon abandon his goal of controlling much of Ukraine.

Diplomatic observers believe the failure of the United Nations, with its mandate to keep the global peace, to do more to halt the fighting in Ukraine is rooted in rules embedded at the body’s founding. Decades ago, global powers emerging victorious from World War II endowed the Security Council with the power to issue binding decisions while also granting its five permanent members — the United States, the United Kingdom, France, China and the Soviet Union, succeeded by the Russian Federation in 1991 — the power to block such moves.

“The U.N. is at one level the great leveler, where all states are sovereign equals,” said Richard Gowan, U.N. director at the International Crisis Group. When it comes to conflicts in Afghanistan or Somalia, where the interests of the United Nations’ biggest players don’t collide, Gowan said, the Security Council has used its heft to make a difference. “But when it comes to a big-power conflict like this, the structure of the U.N. always means that it’s going to be a place for theater rather than for serious diplomacy,” he said.

Kyslytsya, who carries a dog-eared copy of the U.N. charter in his jacket pocket, said it is up to the permanent members aside from Russia to rectify the council’s failings. It’s also in the interest of those countries, including the United States, he said, to stick to the existing rules.

“The United Nations doesn’t come from Moses. It’s a man-made institution,” Kyslytsya said in an interview. “What we have today is a result of a very long sequence of events where all of us to this or another extent are guilty.”

Kyslytsya arrived at the United Nations in February 2020, just as the coronavirus pandemic descended upon New York. In his previous role as Ukraine’s deputy foreign minister, he had helped Ukraine navigate the global response to Russia’s 2014 annexation of the Crimean Peninsula and the entrenched separatist conflict that kicked off in Ukraine’s eastern Donbas region.

During his time at the United Nations, Kyslytsya has been known for brandishing unusually colorful, Twitter-ready language to berate Russia over its actions in Ukraine. He has avoided the often leaden diplomatic boilerplate to capture the attention of his superiors back in Kyiv, the capital, and a larger global audience.

In Ukraine and much of Europe, he said, “they’re sick and tired of what is called U.N. gibberish.”

After the Russian Embassy in London posted a tweet saying that Russia’s goal in the war was to prevent a Ukrainian invasion, he urged Russian diplomats there to call Britain’s mental health hotline.

In one powerful moment in the General Assembly, Kyslytsya held up printed copies of what he described as text messages between a Russian soldier deployed in Ukraine and his mother, moments before the soldier was killed.

“Alyosha, how are you doing? Why has it been so long since you responded?” the soldier’s mother asks, according to Kyslytsya’s remarks.

“Mama, I’m in Ukraine. There is a real war raging here,” the son replies, in his final exchange before his death. “I am afraid … Mama, this is so hard.”

Kyslytsya’s success in elevating Ukraine’s perspective at the United Nations is part of a larger Ukrainian communications strategy — often featuring President Volodymyr Zelensky, a onetime television star, in late-night videos or employing wrenching imagery of victims of Russian violence — that has helped Kyiv secure greater external support, including an increasing array and quantity of Western arms.

Analysts compare the defiant strategy of Ukraine, which has a much smaller military than Russia and none of its nuclear clout, in challenging Russia at the United Nations with what occurred during the Cold War when newly independent nations challenged their erstwhile colonial rulers at the international body.

“That actually is why the U.N. is such a potent political theater, because this is where the combatants meet face to face,” Gowan said.

Kyslytsya has also argued — so far unsuccessfully — that Russia should be removed from its Security Council seat because it improperly inherited the Soviet Union’s place after the Cold War. Amid the fiery exchanges at the Security Council, he said he and Nebenzya, despite their common language and shared Soviet youth, have never spoken beyond exchanges in official settings.

U.N. experts say that Nebenzya, now the face in New York of Putin’s widely condemned campaign, was well-liked by his U.N. peers before the war.

“He was known as someone who would berate you publicly, and privately share a lot of vodkas” with fellow diplomats, Gowan said. It’s unclear how much he and other Russian diplomats knew about Putin’s plans ahead of time. Russia’s U.N. mission did not respond to a request for an interview with Nebenzya.

Kyslytsya and other diplomats note that the United Nations has played an active role in other ways, providing humanitarian aid and helping to document events during the war. U.N. Secretary General António Guterres, who Kyslytsya said failed to take strong action in the lead-up to the war, visited Kyiv as Moscow launched missiles in April and later helped negotiate the evacuation of civilians from the besieged city of Mariupol.

Ukrainian diplomats have also worked, with the help of Washington and other backers, to build a coalition against Russia at the United Nations. In March, after Russia blocked a Security Council resolution condemning the invasion, 141 nations voted in support of a similar measure at the General Assembly, which includes all member states but does not have the same power to pass binding resolutions.

In April, the General Assembly suspended Russia from the U.N. Human Rights Council in another symbolic rebuke. That same month, Ukraine garnered support for a resolution calling for the protection of civilians and humanitarian workers in the war, quashing a competing resolution by South Africa that Kyslytsya said failed to acknowledge Russia’s role in creating the crisis but instead ascribed the problems to “some extraterrestrials [who] landed a UFO somewhere doing some ugly things.”

Support for Ukraine has not been unanimous at the United Nations. China, which has heralded its friendship with “no limits” with Russia, has repeatedly abstained in votes seeking to hold Moscow accountable.

A larger group of countries, including India, the United Arab Emirates and some Latin American nations, have appeared to sit on the fence, condemning the invasion but sitting out European- and U.S.-backed votes. A majority of African nations and the entire Persian Gulf region abstained from the Human Rights Council vote, voicing discomfort at the move by Ukraine and its supporters to punish Russia before full investigations were complete.

A U.S. State Department official, who spoke on the condition of anonymity under agency rules, said Washington and its allies are successfully isolating Russia, no matter its ability to stymie Security Council moves.

“For us, the test of the global response was never going to be whether there was a U.N. resolution” compelling Russia to withdraw, the official said. “It was going to be whether the world is mobilizing to respond to what Russia has done, whether people are stepping up to support Ukraine, whether we and our closest allies are united in terms of our response. And, of course, you’re seeing all of that happen.”

Russia is not the only permanent member of the Security Council that has made regular use of its veto power. The United States has blocked dozens of resolutions that criticized close ally Israel.

Louis Charbonneau, U.N. director at Human Rights Watch, said in an interview that the Security Council would ideally have been able to pass resolutions to halt the war, but even that may not have altered the course of the devastation.

“There’s no world government to enforce Security Council decisions, so if Russia, a country with a huge cache of nuclear weapons, wants to ignore the General Assembly, what’s to stop it from ignoring a legally binding Security Council resolution?” he said.