Some Clinics Resume Abortions in Texas, Despite Ken Paxton’s Threat 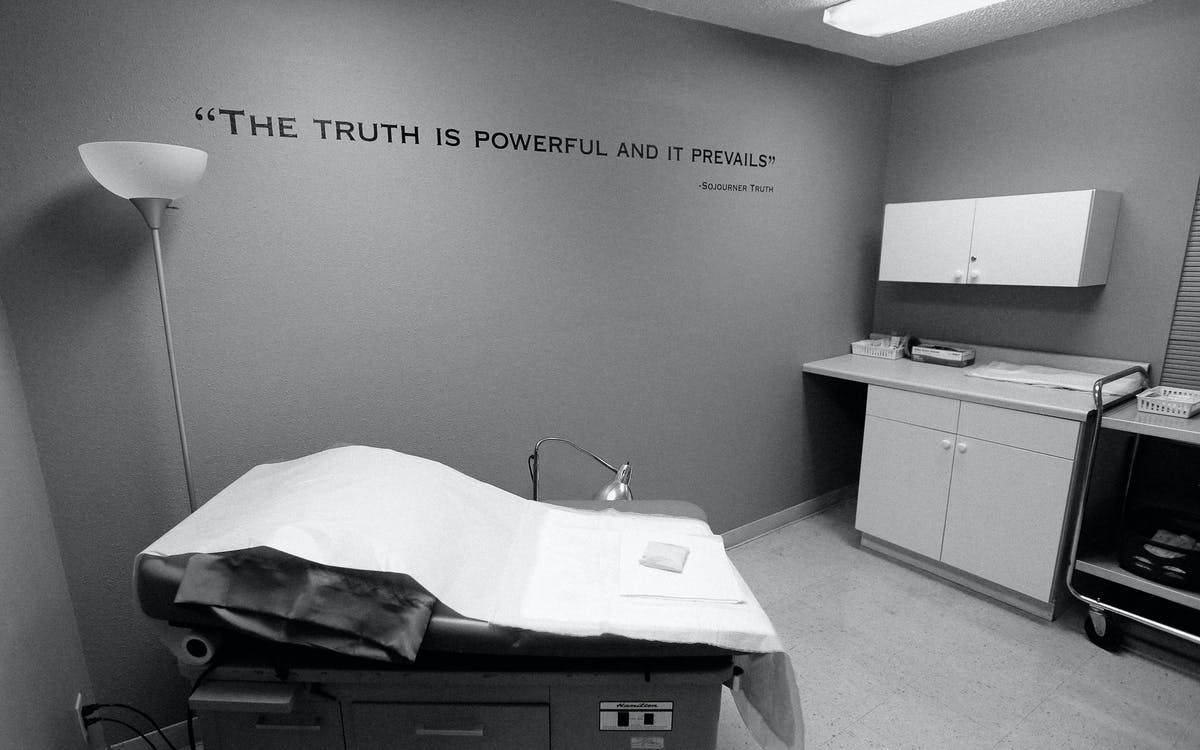 Texas, along with twelve other states, passed a so-called “trigger law” (House Bill 1280, in 2021) that bans all abortion care after Roe’s reversal—with the exception of cases in which the pregnant person’s life is in danger or carrying the pregnancy to term would put the patient at risk of “substantial impairment of a major bodily function.” The law isn’t set to take effect until thirty days following the formal release of a Supreme Court judgment, which in the case of the Dobbs decision could take a month or longer. This means that some abortion-seeking patients in Texas still had at least a few weeks to obtain care under the rules of Senate Bill 8, which bans the procedure once embryonic cardiac activity is detected, typically around six weeks.

However, Paxton—who celebrated the Dobbs v. Jackson decision on Friday by closing his office early and declaring the day an annual holiday—sent out a post-Roe “advisory” that seemingly contradicted itself: Paxton both acknowledged the delay in enforcement of the trigger law and wrote that abortion providers could be immediately held “criminally liable” for providing care, under an 1925 statute still on the books that prohibits abortion and targets anyone who “furnishes the means” to do so with a potential prison sentence of up five years. These laws were the basis for the original Roe v. Wade lawsuit, and they differ from the 2021 trigger law that makes it a first-degree felony—with penalties ranging from five years to life and at least $100,000 in fines for each violation—to perform an abortion.

While today’s state court ruling offers temporary relief, the plaintiffs are seeking a more lasting ban on enforcement of the pre-Roe law with an injunction hearing before state district court judge Christine Weems set for July 12 in Houston. Some abortion physicians in Texas—while still operating under the limitations of SB 8, as they have been for the past ten months—are now providing care, at least for those who have been pregnant for fewer than about six weeks, and at least until the trigger law kicks in and deals the final blow to all abortion care in the state.

“Yes, we are reopening to provide care in our four Texas clinics,” said Amy Hagstrom Miller, president and CEO of Whole Woman’s Health, which operates clinics in Austin, Fort Worth, McAllen, and McKinney. “Keep in mind, Texas still enforces a two-visit requirement and a twenty-four-hour waiting period, as well as the six-week ban and other restrictions. Even with these obstacles, our clinic’s staff are ready to welcome patients back as soon as possible.”

On Tuesday afternoon, Paxton tweeted that “the judge’s decision is wrong” and added that he’d be appealing.

The suit against Paxton—brought by providers including Alamo Women’s Reproductive Services, Houston Women’s Clinic, Southwestern Women’s Surgery Center, and Whole Woman’s Health—also named the heads of medical boards, the heads of state agencies, and local district attorneys as defendants, since they are the ones tasked with enforcing administrative regulations and criminal laws. “This lawsuit is the first step in a post-Roe world to extend care for people in Texas,” Adriana Piñon, acting legal director for the ACLU of Texas, said in a written statement. “We will continue using every tool we have, on every front we can: you will hear us at the legislature; you will also hear us on the streets because Texans deserve bodily autonomy.”

Some Texas Republicans, including state representative Briscoe Cain (R–Deer Park) and other anti–abortion rights allies, have long sought to keep the pre-Roe ban alive. Former Texas solicitor general Jonathan F. Mitchell—the architect of Texas’s six-week abortion ban, which defers enforcement to private citizens—has argued that the courts don’t have the power to strike down the pre-Roe law, using this logic in legal action against abortion funds and the City of Austin: “The supreme court’s judgment in [Roe] did not cancel or formally revoke the Texas abortion statutes, and the judiciary has no power to erase a statute that it believes to be unconstitutional,” he wrote in 2020.

Texas reproductive-health providers aren’t alone in fighting back against abortion laws in court following Roe’s demise: a Planned Parenthood suit in Idaho argues that the state’s trigger law is “unconstitutionally vague” and should be “invalidated and declared unconstitutional,” while a Mississippi lawsuit—filed by the same clinic represented in the recent Supreme Court ruling—is claiming the right to abortion is protected under state constitution precedent. And providers in Louisiana and Utah recently succeeded in temporarily halting their states’ trigger laws in state court this week, allowing at least some abortion care to resume for now.

“If these laws are blocked, I plan to provide abortions for as long as I legally can,” said Dr. Alan Braid, an abortion provider and owner of San Antonio–based Alamo Women’s Reproductive Services, in a written statement. “I started my medical career before Roe v. Wade and never imagined our country would go back to criminalizing doctors and preventing us from helping women. Abortion is a standard and necessary part of maternal health care. Nobody should be forced to travel across state lines for basic, time-sensitive health care. It is devastating that this will be the reality in many states, including Texas.”