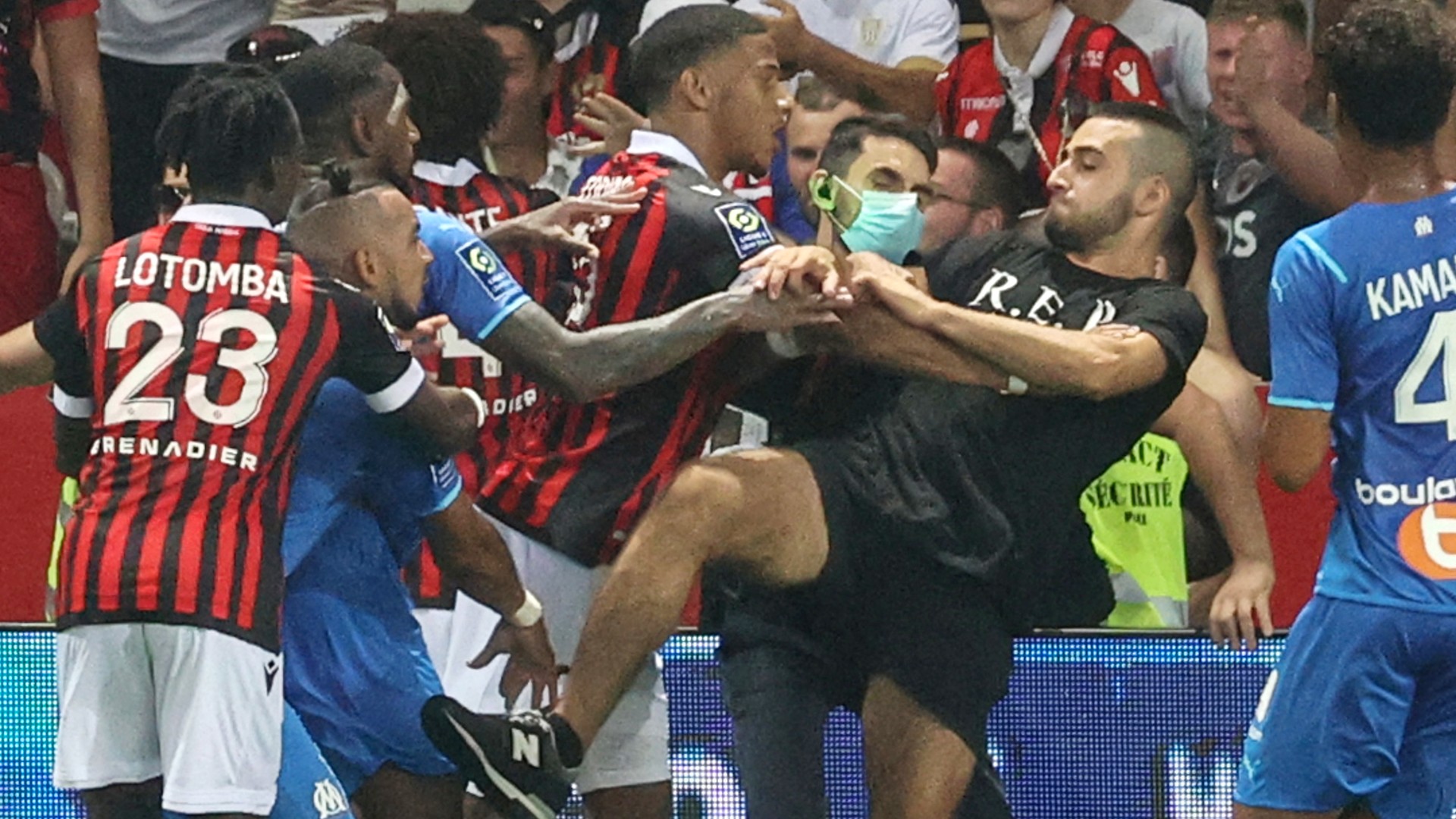 Players and fans clashed in Nice, France, during a Ligue 1 derby match between OGC Nice and Olympique Marseille on Sunday, leading to the referee suspending the match for over an hour.

That reaction led to Nice fans storming the field to confront the Marseille players, breaching security and the fieldboard barriers to do it. There was chaos until security escorted players and coaches from both teams into the locker room on the referee’s orders. Cameras inside the tunnel caught Marseille players and head coach Jorge Sampaoli in heated exchanges with organizers and Nice officials.


After the stoppage, Nice players retook the field and the referee whistled the resumption of play from the corner kick. But the Marseille players were not there for it. They stayed in the locker room and did not reemerge. So the referee called an end to the match seconds after he had restarted it.

The suspension occurred with OGC Nice ahead 1-0 on a 49th-minute goal by Danish forward Kasper Dolberg.

“The referee is with us. He confirmed with me and head coach Jorge Sampaoli that the security [of the players] was not guaranteed. The league decided on grounds of public order to have the match restarted. It was unacceptable for us, and that’s why the decision was made not to resume the match and to return to Marseille tonight.”

OGC Nice president Jean-Pierre Rivere countered by pointing the finger at the Marseille players and the club’s security detail.

“It’s unfortunate that it ended like that,” he said, also in French. “What set fire to the powder is the reaction of the Marseille players throwing back the bottles into the stands. Marseille security should not have intervened on the field and struck our players.

“Everyone decided to resume the match. I did not understand the Marseille decision not to resume.”

This incident can go in several directions. Both teams will likely make their case to league officials, who will ultimately have to rule whether a.) The match stands as a forfeit victory for Nice, b.) The match is resumed at the 76th minute, or c.) The match is replayed in its entirety.

In addition, there are likely to be sanctions involving Nice, its stadium and the fans involved. The Marseille players who threw objects back at the fans could also face discipline.

It’s unfortunately not uncommon in global soccer for players to be targeted by unruly fans who throw objects at them on the field, especially on corner kicks. Earlier this summer, U.S. national team star Giovanni Reyna was hit in the head by a can hurled from the stands during the CONCACAF Nations League. That fan was arrested and faced criminal charges.

Images and video from the incident in France were shared all over social media: