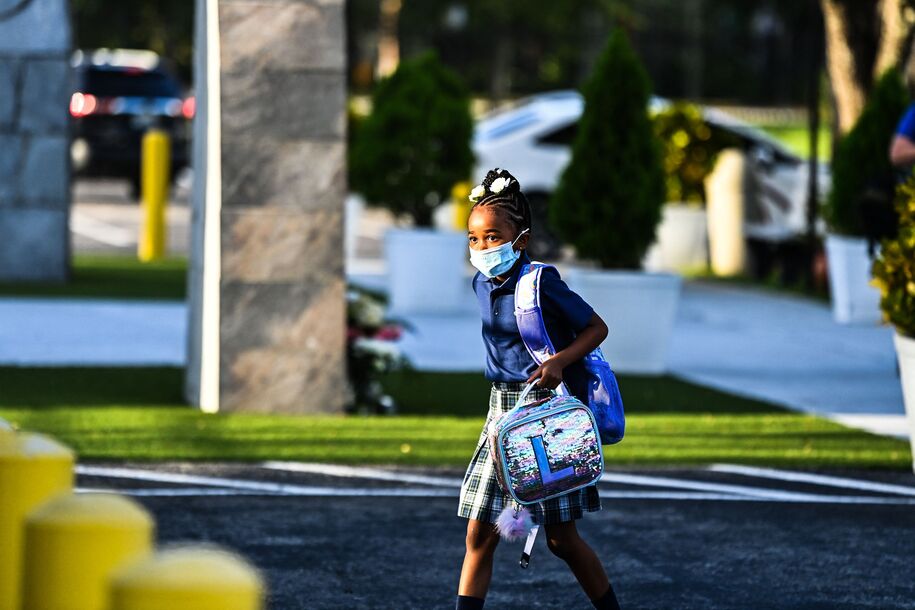 According to NBC, Polk County’s school system is one of the largest in the country, with more than 100,000 students. The district’s COVID-19 dashboard lists a total of 3,803 “confirmed cases” since the start of the school year in August. Chicago Public Schools, which services more than 340,000 students, has had 1,832 confirmed cases since the end of August. That’s more than twice as many reported cases in Polk County, a school district with less than a third of the student body that Chicago Public Schools serves.

Polk County is one of the districts in Florida that has not defied the DeSantis attack on Floridians’ health, so masks are optional for both students and staff throughout the district. A school board member, Lynn Wilson, told WFLA in Tampa that the whole thing is a disaster. “Our hands are tied. The reality is—you can’t enforce a mask policy. I know a lot of folks wanted a mask policy. I think the real key was allowing a virtual option and we couldn’t do that either.”

Chicago Public Schools has a mask mandate and a 3-foot social distancing rule. Up until Wednesday, the district required all school staff and teachers to be vaccinated by Oct. 15. On Wednesday, the district announced that it would relax this requirement as Chicago Mayor Lori Lightfoot has also announced that she would also be relaxing the mandate that all city workers be vaccinated. In both cases, the low rate of COVID-19 spread was cited. According to Chalkbeat, even as the district relaxes this requirement, only about “15% of Chicago school district employees remain unvaccinated against the coronavirus, though officials said they have seen a flurry of new vaccination cards in recent days.” Chicago Public Schools will continue to allow unvaccinated employees to work past the deadline, but they must take weekly PCR tests.

DeSantis has doubled and tripled down on his anti-mask, anti-public health positions, suing and fining school districts that refuse to allow bad politics to drive even worse school safety policy. An important reminder here: DeSantis has not only said that this is a choice that should be made by parents—the GOP “freedom” excuse for bad public policy—he’s argued anti-scientifically against the use of masks as a meaningful mitigation tool in the fight to stop the spread of the virus.

Florida officials and the Republican Party have also peddled in misinformation around the efficacy and safety of vaccines across the board, and in so doing have promoted lower vaccination rates than what would be needed to comfortably take off masks in the first place.

But don’t you worry, Polk County has air purifiers and is using the federal funding provided by the Democratic Party to slowly install “desk shields” in K-5 classrooms. You know what’s easier to uninstall than desk shields? Masks.