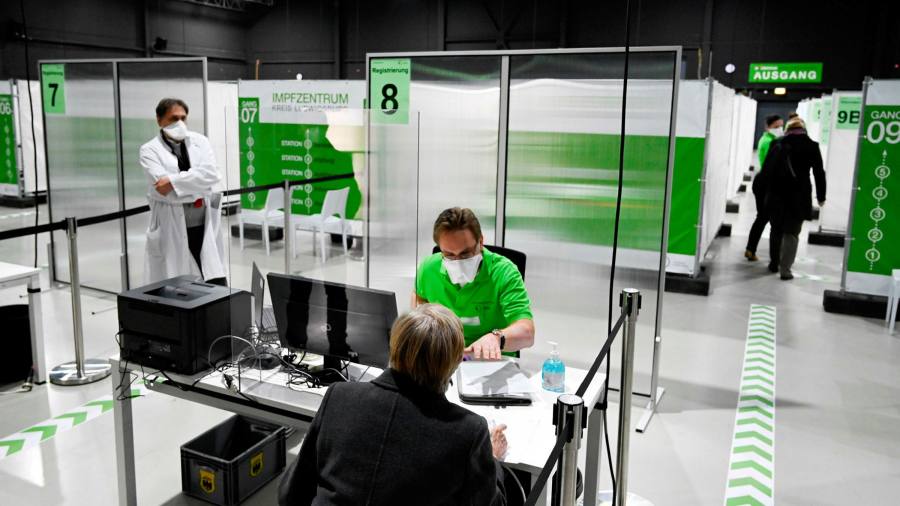 Edleff Joachim should have been among the first to receive a jab when Germany launched its mass Covid-19 vaccination programme on December 27. A month on, the 84-year-old is still waiting.

“It’s just chaos,” said Mr Joachim, who lives in the town of Görlitz on the Polish border. “No one seems to know what’s going on.”

His frustration bears testament to a German vaccination drive in disarray — a mess now replicated across much of the EU due to a shortage of doses. Over-80s were supposed to be inoculated first, along with care home residents, but tens of thousands of eligible Germans have yet to get the shot.

Residents of Görlitz were told a few weeks ago that they could book a slot for a vaccination online or by phone. However, when he called the telephone hotline, Mr Joachim was told no appointments were being given because there was simply not enough vaccine available.

Europe’s supply problems began to bite in earnest this week, heaping pressure on political leaders and EU officials who oversaw procurement. The shortages have fuelled an extraordinary row between the European Commission and AstraZeneca, with Brussels accusing the pharmaceuticals group of reneging on a deal to provide 100m doses of a vaccine developed with Oxford university.

Health authorities in several countries cancelled appointments, delayed first jabs or scaled back plans to ramp up vaccination rates as the UK was able to do after the first few weeks of its inoculation programme.

“The lack of available vaccines is the number one political issue in Europe at the moment,” said Guntram Wolff, director of the Bruegel think-tank in Brussels. “It affects every family. People wonder why the vaccines are not coming. The pressure is enormous.”

After being criticised for a sluggish start to their vaccination drives, health authorities across the EU quickly ramped up their capacity to administer jabs — only to run into a shortage of doses.

For example, the region of Baden-Württemberg in south-west Germany has set up 10 huge vaccination centres and 49 smaller ones, together able to inoculate 54,200 people a day. But due to the lack of vaccine, the state can offer just 585 appointments a week — a figure that includes jabs given by mobile teams to residents of local care homes. Baden-Württemberg’s ministry of social affairs said the state got 42 per cent less vaccine this week than planned and will receive 15 per cent less next week.

Three French regions covering a third of the national population ordered hospitals to delay new first-dose injections by two to four weeks in order to guarantee supply of doses for the second booster jabs.

Madrid’s regional government has also stopped almost all new first injections to prioritise second doses amid uncertainty about deliveries. A regional health official described how a consignment of the BioNTech/Pfizer vaccine to the Spanish capital 10 days ago had been half what it had been expected — 25 trays instead of 50, each containing 975 doses.

“As soon as we became aware of the EU-level agreements to buy vaccines, we were worried about their complexity, given that some of the production facilities were outside the EU and the enormous international competition for the vaccines,” she said.

Denmark, one of the best performers in the EU, will administer fewer doses of vaccine in the first half of February than it has in the second half of January. It has stopped giving first doses to healthcare workers and cannot expand its programme to new categories.

“There’s quite a lot of frustration because the logistics side [of the vaccine rollout] has been working quite well,” said Camilla Noelle Rathcke, head of the Danish Medical Association. “But that’s the way it is. Nobody can do anything about it right now.”

Jens Spahn, German health minister, said it would be “at least another 10 tough weeks” before vaccine shortages ease.

Europe’s vaccination campaign has faltered against a backdrop of growing frustration — and, in The Netherlands, several nights of rioting and street violence — over prolonged lockdown measures. It has undermined the credibility of the commission, which took on the task of procuring vaccines for the whole bloc but was slower than the UK or US to sign contracts and to approve vaccines for use.

German politicians, and parts of the German media, have been particularly unforgiving.

“It’s my impression that they [the commission] ordered too late, and only bet on a few companies, they agreed on a price in a typically bureaucratic EU procedure and completely underestimated the fundamental importance of the situation,” Markus Söder, the Bavarian premier and possible future chancellor, told ZDF television on Friday.

The blame game can go on, but it can’t bring solutions

“We have a situation . . . where grandchildren in Israel are already vaccinated but the grandparents here are still waiting. That’s just completely wrong.”

Emmanuel Macron, French president, defended the EU’s vaccination strategy, saying it made sense to ensure the whole continent was protected together because of the connections between countries.

“Assume that France, Italy and Germany have a very ambitious and rapid vaccination plan — it would be doomed to failure if their neighbours did not have the same policy, because our economies are integrated,” he said.

The same applied to the UK, which is vaccinating its population much more rapidly than the EU. “What are they going to do, stop European lorries coming in? . . . There’s a total dependence on the continent. And equally, we need the British to succeed because we’re connected and we need to make progress on matters such as defence and immigration.”

Mr Wolff at the Bruegel think-tank said that while Brussels had serious questions to answer, member states also shared responsibility as they were involved in decision-making at many levels.

“Every country wants the vaccine and no country is more fit than others to receive it,” said Dr Rathcke of the Danish Medical Association. “The blame game can go on, but it can’t bring solutions.”