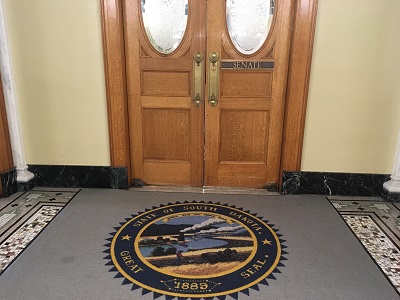 Our State Constitution spells out the broad structure for impeachment proceedings of the Governor and other state and judicial officers. The House of Representatives has the sole power of impeachment for the offenses of drunkenness, crimes, corrupt conduct, or malfeasance or misdemeanor in office. A simple majority of members elect is required to impeach.

The Constitution requires the Senate to try each impeachment and requires each Senator to take an oath of affirmation to do justice according to law and evidence.  Convicting someone of an impeachable offense requires a two-thirds majority and may include removal from office and disqualification to hold any office of trust or profit under the state.

On April 12, 2022, the House of Representatives adopted two Articles of Impeachment for Attorney General Jason Ravnsborg. As soon as the vote became public, Senate leadership began polling Senate members to find the earliest date we could begin our part of the process. The Senate met on Tuesday, April 26, and adopted a resolution to resolve itself into a Court of Impeachment. The Constitution requires a 20-day interval before a trial can be held. Based on a survey of when Senators would be available, the trial has been set to start on June 21.

The Senate also adopted a resolution setting out the rules for the trial. Because South Dakota has never had an impeachment trial before, we are adopting rules based on research of other states’ proceedings. The Constitution specifies that the Lieutenant Governor presides over the trial. For this trial the Senate has hired former Lieutenant Governor Matt Michels to assist with questions of procedure.

Under the rules we adopted, the prosecution and respondent will each have an hour for opening statements, four hours for presenting witnesses and exhibits, and an hour for closing statements. If the Attorney General chooses to testify, he will not be subject to any time limitations.

The first article of impeachment deals with crimes causing the death of Joseph Boever; the second pertains to malfeasance in office following the death of Mr. Boever. For each article, the Senate will vote on whether to sustain the article and remove Jason Ravnsborg from the office of Attorney General. If the article is sustained, a second question will be whether Mr. Ravnsborg shall be disqualified from holding any office of trust or profit under the state. Each vote will require a two-thirds majority to pass.

This is not a criminal or civil proceeding, but a constitutional obligation. Senators have been encouraged to begin reviewing the evidence that has been presented so far.  Any questions we have of either party need to be submitted by June 13.

The rules adopted by the Senate are available on the Legislative Research Council website, as is the file of evidence we will consider. You may find them at sdlegislature.gov.