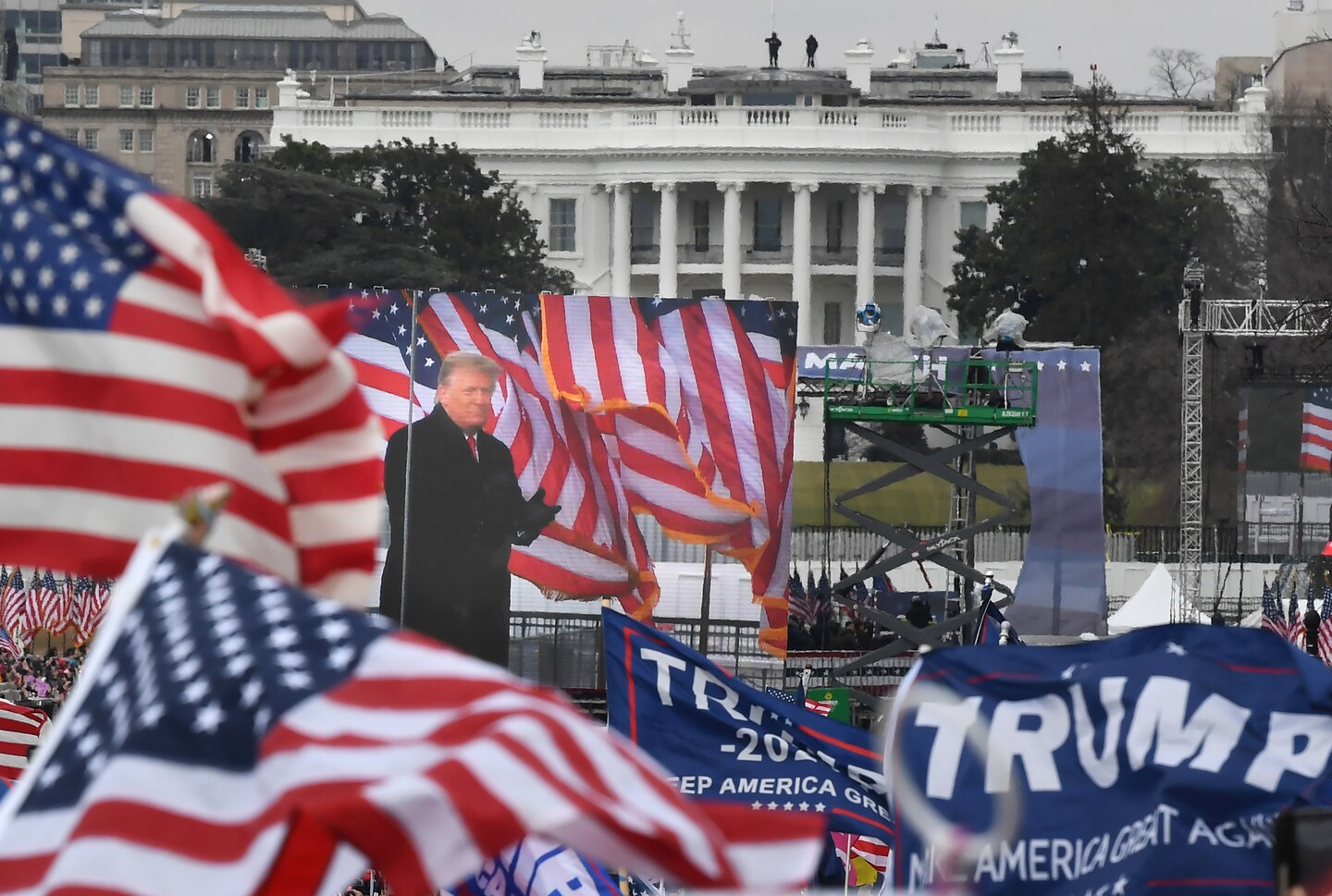 Shortly before pro-Trump rioters stormed the U.S. Capitol on Jan. 6, 2021, Secret Service agents scrambled to try to secure a motorcade route so then-President Donald Trump could accompany his supporters as they marched on Congress to demand he stay in power, according to two people briefed on witnesses’ accounts to congressional investigators.

The hectic events that day followed nearly two weeks of persistent pressure from Trump on the Secret Service to devise a plan for him to join his supporters on a march to the Capitol from the park near the White House where he was leading a massive rally that he predicted would be “wild.”

The agency had rebuffed Trump’s early entreaties, but the rushed effort on Jan. 6 to accommodate the president came as Secret Service personnel heard Trump urge his rally audience of nearly 30,000 people to march to the Capitol while suggesting he would join them. Their mission was clear, he said: pressure “weak” Republicans to refuse to accept the election results that made Joe Biden the next president.

“We’re going to walk down to the Capitol,” he told the crowd.

Witnesses have told the House Jan. 6 committee that, immediately after Trump made that remark, Secret Service agents contacted D.C. police about blocking intersections, according to the people briefed on the testimony. Police officials declined, as they were stretched thin due to their role monitoring numerous protests and later assisting with a growing mob at the Capitol, the people said. A senior law enforcement official told The Washington Post that the president’s detail leader scuttled the idea as untenable and unsafe.

A D.C. official on Tuesday confirmed the Secret Service sought D.C. police for help with a presidential motorcade on Jan. 6.

“We were asked, and the response was no,” said Dora Taylor-Lowe, a spokeswoman for the D.C. deputy mayor that oversees the police department.

The testimony, which could be featured as part of a series of high-profile hearings set to begin this week by the House Jan. 6 committee, indicates that several days before his speech Trump had been eager to join supporters on a march to the Capitol. No permit had been issued for such a march, though some Trump allies were touting a march on far-right social media platforms as a way to pressure Congress not to certify Biden’s election victory.

Trump previously told The Post that his wishes to go to the Capitol on Jan. 6 were blocked by the Secret Service. But Trump’s early insistence on joining a march has not been previously reported, nor was it known publicly that Secret Service officials considered taking steps to transport him there just as the chaotic events were about to unfold.

The new details also reflect a growing focus by the House committee on whether Trump’s White House may have tried to drag this civil service agency into the president’s quest to block the peaceful transfer of power. Five people died and more than 100 police officers were injured as rioters streamed into the Capitol.

A Secret Service spokesman said agents in charge of Trump’s security never formalized a plan to bring Trump from the White House to the Capitol.

“On January 6, the Secret Service did not secure a motorcade route for President Trump to travel to the Capitol after the Ellipse rally,” spokesman Anthony Guglielmi said. “Secret Service personnel assigned to the President’s detail told Administration officials that proposed travel plans to visit the Capitol on January 6th would not be feasible.”

Guglielmi said the agency is cooperating fully with congressional investigators’ request for information and documents about Secret Service planning for Trump’s movements that day. He said the agency conducted an extensive search of its internal records which found it had no operational plans to move Trump to the Capitol.

A spokesperson for Trump did not respond to requests for comment Monday and Tuesday.

In addition to probing Trump’s repeated press to have the Secret Service let him join the march, the committee has been investigating whether Trump and his political aides played any role in encouraging the Secret Service to remove Vice President Mike Pence from the Capitol after the building was stormed by Trump supporters — and before he had overseen the certification of Joe Biden’s victory, according to people briefed on the probe.

In an interview in April with The Post, Trump voiced regret over not marching to the U.S. Capitol the day his supporters stormed the building. He said he pressed to join the march that day but was stopped by his security detail.

In the interview, Trump defended his incendiary comments urging his supporters to come to Washington and then to march on the Capitol and “fight like hell.”

“I said patriotically and peacefully,” he said. He added that he offered up to 10,000 soldiers and National Guard members to the Capitol and city through his Defense Department, but Speaker Nancy Pelosi (D-Calif.) and Mayor Muriel E. Bowser (D) turned down the offer.

“If I wanted to do something, I wouldn’t be recommending soldiers,” Trump said.

Trump’s first public communique about Jan. 6 to his faithful supporters came in a Dec. 19 tweet. He encouraged his followers to gather in Washington to protest what he called a rigged election with these words: “Be there. Will be wild!”.

Days later, according to witnesses’ accounts to the committee, Trump was pressing his aides to help him cheer on a protest directly outside the Capitol.

Around New Year’s Eve, Trump aides raised with Tony Ornato, a Secret Service official then temporarily serving as a deputy chief of staff in the White House, the president’s desire to ride in a motorcade on Jan. 6 alongside marchers heading to the Capitol, according to the witnesses’ accounts and a senior law enforcement official.

Ornato recommended Trump aides reach out to the leader of Trump’s Secret Service detail around Jan. 4, the law enforcement official said. Secret Service officials were highly skeptical they could safely spirit Trump to the Capitol based on a similar experience they had at a “Stop the Steal” rally in downtown Washington on Nov. 14, according to witness accounts. Trump had thrilled his faithful supporters at the November rally when his motorcade appeared on Pennsylvania Avenue shortly after 10 a.m. Fans scurried to Freedom Plaza in downtown D.C. to catch a glimpse. Trump had pressed his security detail to make the detour to ride alongside the crowd, just before he was scheduled to head to his Trump National Golf Club in Sterling, Va.

Ornato and Trump’s detail leader considered the Nov. 14 motorcade ride a potential catastrophe in the making, because of how close Trump’s limo came alongside unscreened members of the public, according to two people briefed on the discussions.

“And they really, really did not want him to go,” said one of the people. Trump’s detail leader told senior White House staff such a motorcade plan during an even larger rally in January was unsafe and should not happen.

On the morning of Jan. 6, many Secret Service detail members believed they were doing an “in and out” — taking Trump to the Ellipse stage and then back to the White House, according to witness accounts. They were caught off guard when Trump made what they considered a surprise announcement, according to a senior law enforcement official.

Some motorcade agents began rapidly making calls to their contacts in the D.C. police to see if they could get some help securing a motorcade route, according to witness accounts. Police officials responded that they were strained providing reinforcements for Capitol Police and manning security checkpoints around the multiple rallies that day.

The head of the president’s security detail intervened to cancel the effort and told senior White House staff that moving the president to the Capitol would be far too risky, a senior law enforcement official said.