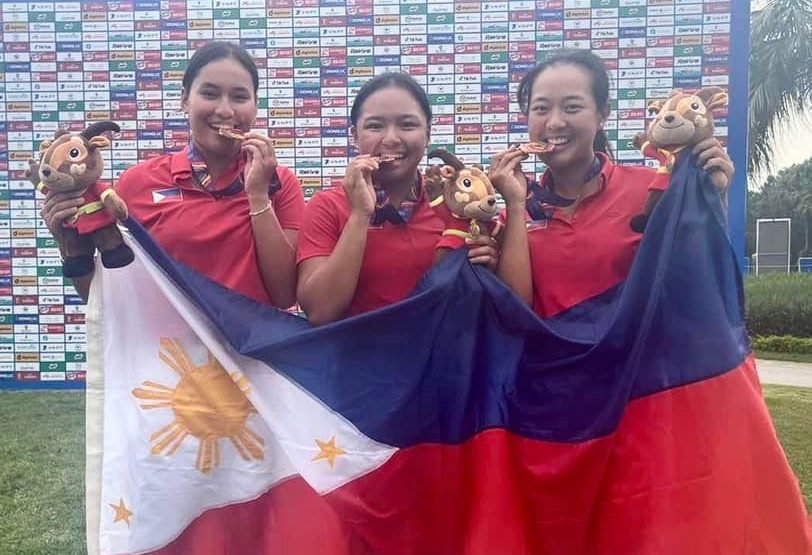 Young Rianne Malixi delivered in style, coming through with a spectacular chip-in birdie on the fourth playoff hole to beat Singapore’s Suanne Loh and hand the country the bronze medal in women’s golf team match play in the 31st Southeast Asian Games at Heron Lake Golf course in Vinh Phuc, Vietnam on Wednesday.

Malixi’s heroics came after she muffed a five-foot downhill birdie putt on No. 1, the third playoff hole, giving Loh, whose own chip hit the cup but lipped out, and Team Singapore another crack at the hotly-disputed medal.

Both players overshot the par-5 No. 9, where they matched par twice in the playoff, but the ICTSI-backed Malixi hit a perfect chip shot, the ball landing before the green then rolling from left to right before dropping to the cup.

Undaunted, Loh also hit a solid chip-shot, the ball heading straight to the hole but swerved to the left, sending Maixi and the Philippines to jubilation and reducing the Singaporean lass to tears.

That chip saved the week for the Filipino golfers, who could finish no higher than fourth in women’s individual play courtesy of Lois Kaye Go with Malixi ending up joint ninth behind eighth placer and ICTSI teammate Mafy Singson and 15th in the men’s side through Jed Dy.

Earlier, Malixi upstaged individual silver medalist Aloysa Mabutas, 3&2, to force a playoff for the bronze after Go yielded a 4&3 result to Loh.

Malixi took the first two holes against Mabutas, surrendered the next but held sway all throughout their tight duel, going 2-up again by taking No. 15.

A solid tee-shot on the par-3 16th set up another birdie chance from six feet and the rising Filipina star delivered, draining in a downhill putt to clinch the victory.

She pumped her fist then gave Mabutas, whose parents are Filipino migrants, the customary hug before celebrating with her team.

It was a big windup for Malixi, who groped for form in individual competitions and in the first round of team match play, dropping a 2&1 setback to Thai gold medalist Natthakritta Vongtaveelap in their semis duel but came into the bronze medal match brimming with confidence, winning the first two holes against Mabutas.

In contrast, Go struggled against Loh in their side of the match play. The member of the bronze medal team in the 2019 SEAG in Tarlac never recovered after trailing on No. 3, giving up another hole on the sixth. She took No. 8 but yielded the 10th and gave up three straight holes from No. 13.

Meanwhile, Malaysia staked its claim as the new force in men’s amateur golf in the region, breaking the vaunted Thailand side with a 2&1 victory on Rhaasrikanesh Kanavathi’s equally stirring chip-in for birdie on the 18th for a 1-up triumph over Pongsapak Laopakdee and a 2-1 victory for the team gold.

The Thai women’s squad, however, swept the gold medals with Vongtaveelap running away with the individual honors and then teaming up with Eila Galitsky in their 1.5-0.5 victory over Malaysia in the gold medal match.