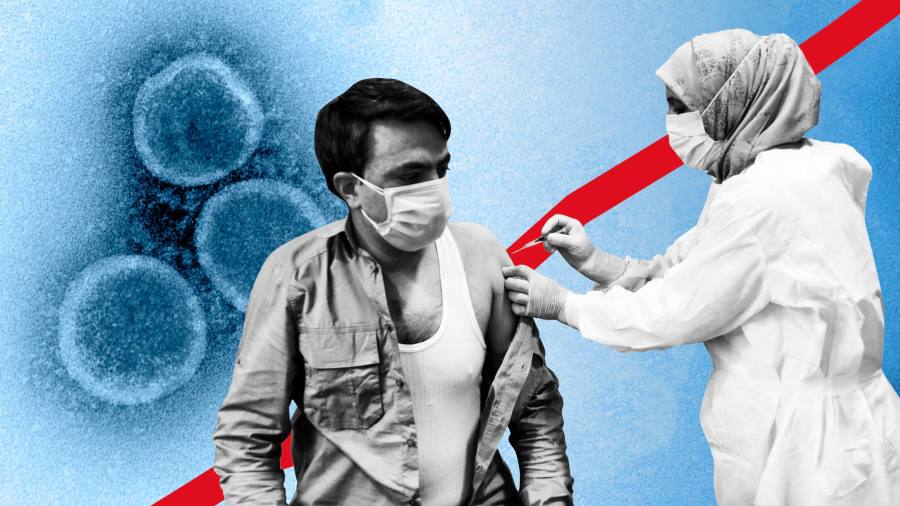 Reports that fully vaccinated people have become infected with Covid-19 in India have concerned some scientists, reigniting the debate over the threat the mutating virus poses to global vaccination campaigns.

Ravi Gupta, professor of clinical microbiology at Cambridge university and one of the leading scientists investigating new strains of Sars-Cov-2, told the Financial Times he had identified “worrying” cases of post-vaccination infection involving at least one of the new variants first identified in India — B.1.617.2

At one care home in Delhi, 33 staff members who had been fully vaccinated with the Oxford/AstraZeneca jab, tested positive for the B. 1.617.2 strain, he said, though none became seriously ill. “We thought everyone would be protected [but] the virus was able to get around the vaccine,” Gupta said.

Gupta’s findings add to the many reports in the Indian media of fully-vaccinated doctors and medical workers testing positive for Covid-19 over the past two months, as the country has been slammed by a ferocious second wave of infections.

The FT has not corroborated individual press reports but the Indian Medical Association said that at least nine of 194 doctors that had died of Covid-19 during the recent outbreak were believed to have been fully vaccinated. The organisation was in the process of verifying more details, including how long after their second shot the doctors had died and which vaccine they had received, Dr Johnrose Austin Jayalal, IMA national president, told the FT.

The question scientists must now answer is whether the so-called “vaccine breakthrough” cases can be explained by the sheer number of people contracting Covid-19 in India and the efficacy of the shots — none of the jabs are 100 per cent effective. Or whether the new strains, as with the variant first identified in South Africa, have evolved to become more resistant to the vaccines.

Indian virologist Shahid Jameel, a member of the Indian Sars-Cov-2 Consortium on Genomics, said that severe cases of Covid-19 following vaccination remained “very very rare” and that the few incidents were drawing public attention because of the pervasive anxiety in the country, where an average of 388,000 people are testing positive every day.

India had administered 171.1m vaccine doses by May 10, according to FT data — a combination of a locally produced version of the AstraZeneca shot and the Covaxin jab developed by India’s Bharat Biotech. Only 2.6 per cent of the population has been fully vaccinated

Every country with advanced vaccination programmes has recorded cases of “vaccine breakthrough”. In the US by April 26 the Centers for Disease Control and Prevention had received 9,245 reports of infections in people who had been fully vaccinated, including 835 hospitalisations and 132 deaths.

“Getting infected after vaccination does not tell us anything, it could well be within the expected margin of vaccine efficacy,” said Muge Cevik, a clinician and researcher in virology at Scotland’s University of St Andrews.

Mehul Suthar, assistant professor of paediatrics at Emory University in the US who has been conducting lab analysis of new variants of concern, agreed that there was little severe disease and death occurring in cases of vaccine “breakthrough” but warned of the risks of further mutations.

“The more these variants emerge, the more opportunities they have to mutate, cause infection, and become more transmissible,” he said.

While most scientists remain confident that the current crop of vaccines would protect against severe symptoms and death, there is growing consensus that at least one of the three descendant lineages of the variant initially found in India is partially vaccine-resistant — B.1.617.1.

A paper published this week by Gupta’s lab that has not yet been peer-reviewed, found that B.1.617.1 had “modestly reduced sensitivity” to the BioNTech/Pfizer vaccine. Another paper by Suthar at Emory, found that antibodies were sevenfold less effective at neutralising or blocking the variant in comparison to the original Wuhan strain. That put B.1.617.1 “on a par” with the variant first identified in South Africa, which has been found to reduce the efficacy of some shots, Suthar said. Both the papers stressed, however, that vaccines demonstrated reasonable protection against the disease.

The B.1.617.1 variant has a particular mutation, known as E484Q, that is often associated with vaccine escape. That mutation is not present in the B.1.617.2 variant, which has spread from India to roughly 40 countries around the world, but it does have a different mutation called T478K, about which little is known.

Prevailing scientific opinion is that the B.1.617.2 variant is more transmissible than B.1.617.1 and at least as transmissible as the highly infectious variant, first identified in Kent, UK.

The World Health Organization said this week that preliminary studies suggested that the Indian variant and its sub-lineages spread more quickly and registered the strain as the fourth “variant of global concern”, adding it to those first identified in the UK, Brazil and South Africa.

For Gupta, the Indian variants deliver a firm “warning”.

“If we don’t keep the lid on their spread we may end up with variants that are even better at evading our vaccines,” he said. “It’s key to not underestimate what this virus can do.”