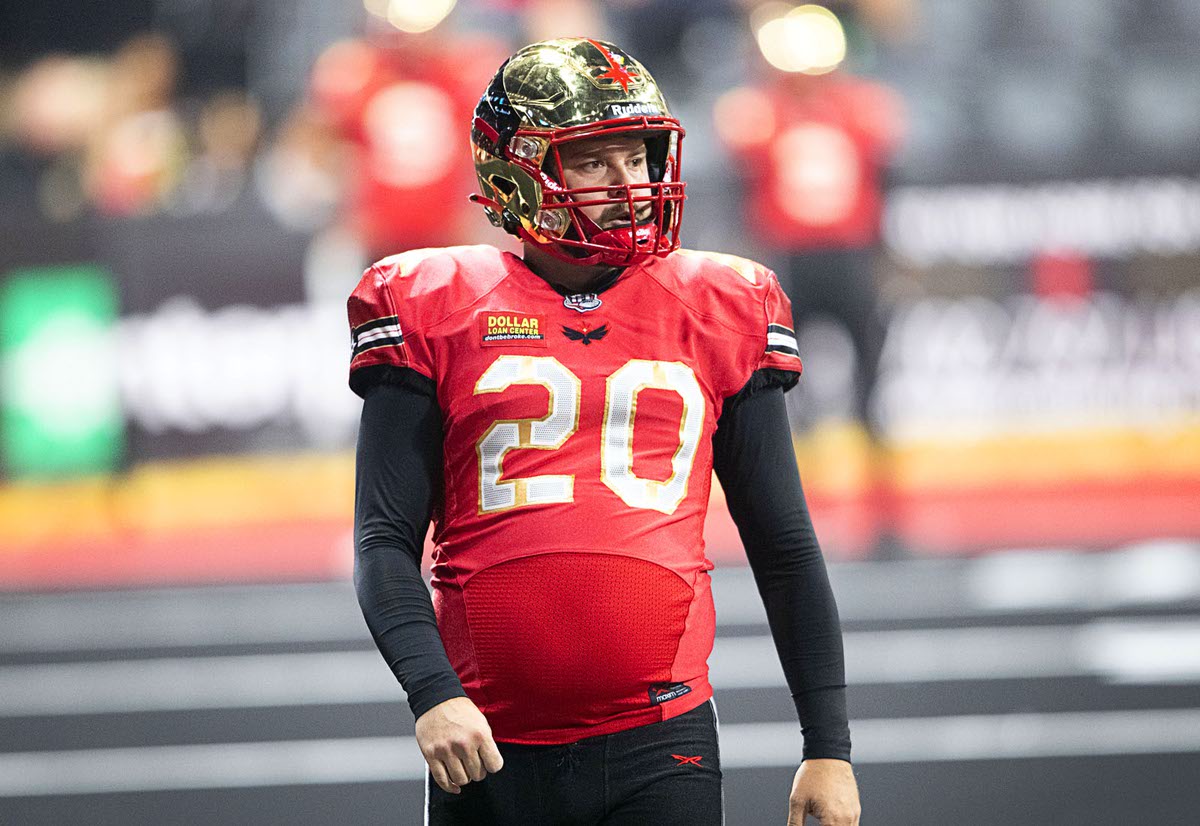 Vegas Knight Hawks Nolan Kohorst (20) warms up before kicking during an Indoor Football League game against the Duke City (Albuquerque, N.M.) Gladiators at Dollar Loan Center Saturday, May 21, 2022. Kohorst, a sixth-grade teacher at Faith Lutheran, is a former UNLV kicker.

Nolan Kohorst doesn’t normally answer his phone during class. This call on April 5 was an exception.

The Faith Lutheran Middle School and High School teacher stepped out of his classroom to take the call. On the other end of the line was Vegas Knight Hawks coach Mike Davis.

Davis had a message: Kohorst would be playing football that upcoming Friday for the Indoor Football League team.

“They were in the middle of doing their homework,” Kohorst said of his students. “I didn’t say anything to my class that day.”

Kohorst, a 29-year-old former UNLV kicker, waited until later to tell them he had been signed to a contract with the Knight Hawks.

He made his on-field debut April 16 against the Northern Arizona Wranglers, going 2-for-4 in field goals and making two extra-point attempts.

“It’s been a complete whirlwind these past couple of weeks,” the Henderson native said.

Kohorst was a four-year kicker at UNLV from 2010-13. He started all four seasons, beginning with three straight two-win seasons and ending with a senior group that reached the Heart of Dallas Bowl.

After making 67% of his field goals during his college career, Kohorst didn’t expect any pro offers coming his way, and he was OK with that. “I was ready to start life,” he said.

After he graduated, Kohorst, who majored in history, started teaching at Henderson’s Basic Academy — the rival of his alma mater, Green Valley.

He saw teaching as a way to get involved in coaching and wanted to have the same impact on his students that his teachers had on him.

Soon after, Faith Lutheran coach Mike Sanford — the football coach at UNLV before Kohorst arrived — asked him to be the Crusaders’ special teams coordinator.

“Our staff up here is amazing with coach Sanford being at the head of it,” said Kohorst, who now teaches math, science and history at the private school in Summerlin. “It’s an awesome group of guys that just love football.”

Life at the Kohorst house was busy enough before the Knight Hawks came calling. Playing football again was another wrinkle.

Kohorst and his wife, Quincey, also a teacher, had their first child a year and a half ago. They both recently earned their master’s degrees in education administration from Grand Canyon University. And Quincey Kohorst is a swim coach, cross country coach and recently completed a triathlon.

“It’s not easy,” Nolan Kohorst said. “I usually sit with my wife the night before and morning of each day and go, ‘OK, what do we have coming up this week? What do we have tomorrow? What is your swim meet? Where is our son going tomorrow?’ All of those things kind of make it a beautiful chaos that it is.”

Kohorst also has to juggle his teaching and coaching jobs with playing. He hasn’t been able to train much with the Knight Hawks because they normally practice during school hours.

Kohorst instead practices at Faith Lutheran with his students. Even on the road with the Knight Hawks, he stays in teacher mode, working on lesson plans from the team’s hotel.

“It’s not the same life the rest of my teammates are living,” he said.

Davis said he was aware of Kohorst’s other responsibilities when the team signed him.

“Nolan is that kid that everybody kind of needs on their team — the kid that’ll do everything and who’s entrenched in the community,” Davis said. “He’ll go out and kick once or twice a week and be ready for games.”

Kohorst is one of three former UNLV players with the Knight Hawks, along with linebacker Gabriel McCoy and defensive back Jericho Flowers. He’s also one of the older players on the team.

“I’m rocking the dad bod out there and not liking the tight compression jerseys that we have,” Kohorst said. “I’m just trying to do my job and help the team out.”

The first-year Knight Hawks, who play at Dollar Loan Center in Henderson, have a 4-6 record and are a game out of the playoffs if it were to start today.

No expansion team has ever made the IFL playoffs. But Kohorst thinks the Knight Hawks can channel the magic of another team that reached the championship finals in its inaugural season.

“Why not us?” Kohorst asked. “Why can’t we be the Golden Knights of the IFL?”

Key inflation gauge tracked by the Fed remains a high 6.3%